Howdy, folks.  Apologies for the delay in posting.  I took a slight break from The Truth Inside The Lie to do my latest entry over at my other blog, the James Bond-centric You Only Blog Twice.  Over there, I've been slowly working my way through the Bond films again and trying to rank them according to this nutso grading scheme I came up with.  It's grand fun, for me if for nobody else, and I spent the better part of the day writing about Goldfinger, which, of course, is one of the better entries in the series.

But you didn't come here to read about that, now didja?  No!  You came here to read some more about Marvel's "The Little Sisters of Eluria."  Specifically, today, I'm going to talk for a bit about Robin Furth's prose contributions to the issues, which are even better than usual this time out. 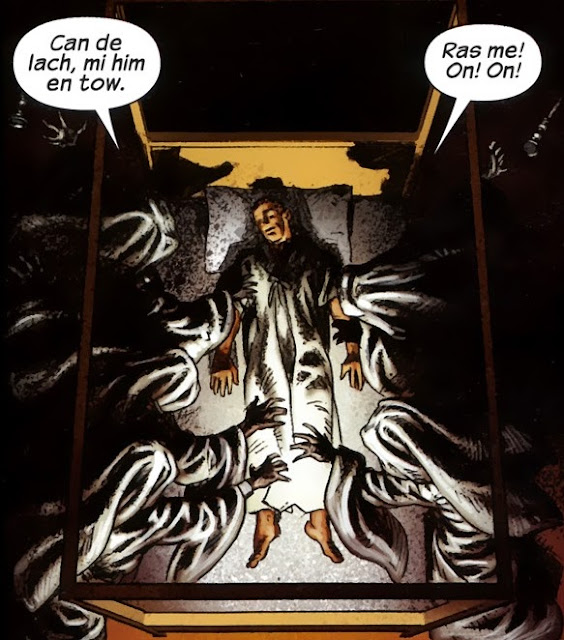 I don't have a huge amount to say about either of these essays (apart from suggesting that you read them because they are very, very good) ... but both contain some nuggets that help to illustrate some interesting things, about both this arc of the comics and about the larger tale -- in both its prose and graphic iterations -- of the Dark Tower.  What I'm going to do is just present my thoughts on various matters in the essays, in roughly the same order they would spring up as I was reading them, with quotations from Furth's essays to help give my own comments the proper context.

So, why not let's us get into it.  Whattaya say?

Email ThisBlogThis!Share to TwitterShare to FacebookShare to Pinterest
Labels: Desperation, It, Marvel Comics, Pet Sematary, Robin Furth, The Dark Tower, The Little Sisters of Eluria, The Talisman, The Tommyknockers

Such Ones to Speak of Damnation: "The Little Sisters of Eluria" #5 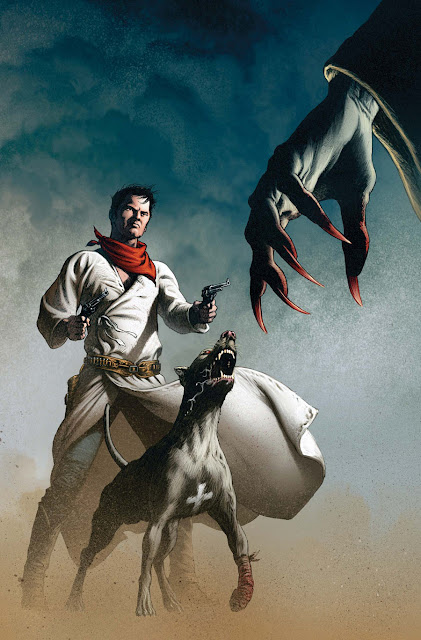 ﻿
Well, I'm just a lowly blogger, so maybe my judgment isn't the be-all-end-all, opinion-wise, but yeah, I'd say it does; I'd say it with caveats, but I'd still say it.

Let's have us a palaver about it, shall we?

Read more »
by Bryant Burnette at 3:40 AM No comments:

We Can Still Drink His Pleasure: "The Little Sisters of Eluria" #4

Here ya go, have some nightmare fuel: 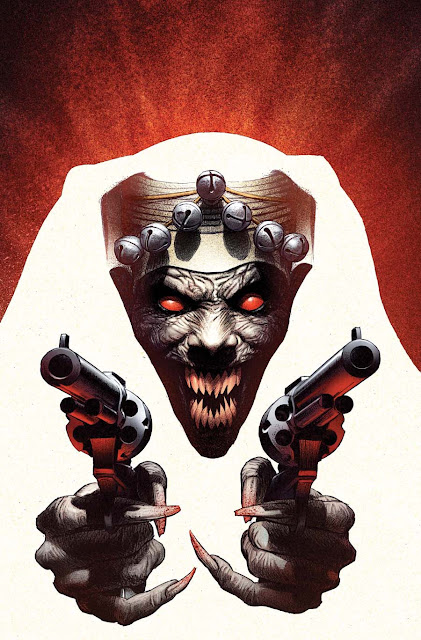 If that isn't the worst thing you've seen today, then brother or sister, I don't wanna know what you been lookin' at.


﻿Actually, here's something entirely unrelated, but even worse:

Read more »
by Bryant Burnette at 9:43 PM No comments:

Yer Ties to Reality Are a Might Shaky: "The Little Sisters of Eluria" #3

I'd hoped to have this review posted earlier in the week, but sadly, blogging about Stephen King comics don't pay the internet bill, much less for food and gasoline.  Sad when work keeps you from doing what you'd like to be doing, but that's life, I guess, and mine ain't too shabby compared to the lives a lot of people get stuck leading, so the complaining officially stops ... now.﻿

Actually, the complaining will be starting up again real soon, because I don't much care for issue #3 of "The Little Sisters of Eluria."  Hmm; hypocrisy is no good, so let's think of what's about to happen less as complaining and more as explication of dissatisfaction.  Yeah ... that sounds better ... 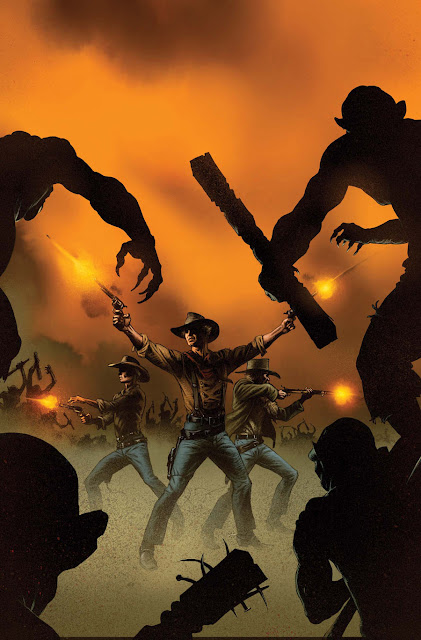 Time Belongs to the Tower: "The Little Sisters of Eluria" #2

The first issue of "The Dark Tower: The Gunslinger -- The Little Sisters of Eluria" (sheesh, what a title...) was all about getting Roland into the vulnerable position he is in when the second issue opens: badly injured, immobile, and dependent for his life upon a crucifix-bearing medallion he has fortuitously taken from a dead body.

But it isn't the medallion alone that is saving him from the vampiric Little Sisters, the "healers" under whose "protection" he has found himself.

If you've a copy close to hand, go back to issue No. 1 and check the panels in which Roland, in an act of blind kindness, takes the medallion from James.  Pay attention to where he puts it: in a pocket on his jeans.  He is shortly thereafter waylaid by the green folk, and does not remove it from his pocket.

How, then, does it get out of his pocket and around his neck? 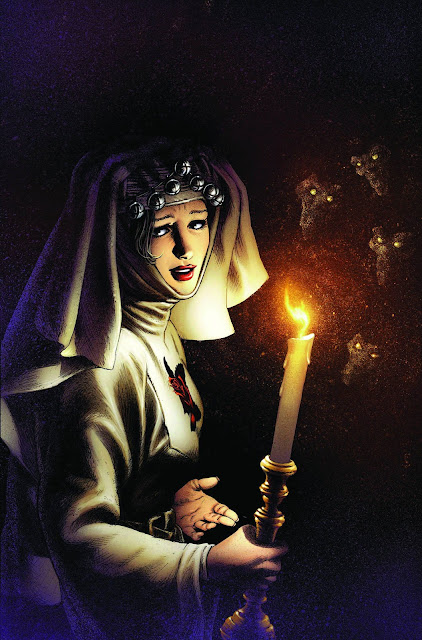 Sister Jenna, of course; and she is the primary focus of this issue.

Read more »
by Bryant Burnette at 2:03 PM No comments:

This Place Has A Reddish Odor: "The Little Sisters of Eluria" #1

Fact #5: I am a Marvel Comics "Dark Tower: The Little Sisters of Eluria" nerd.

Enough facts.  Let's move on to opinions, which are like facts, only slightly more prone to serve as troll-bait.  You might not think so, but YOUR WRONG LOL! 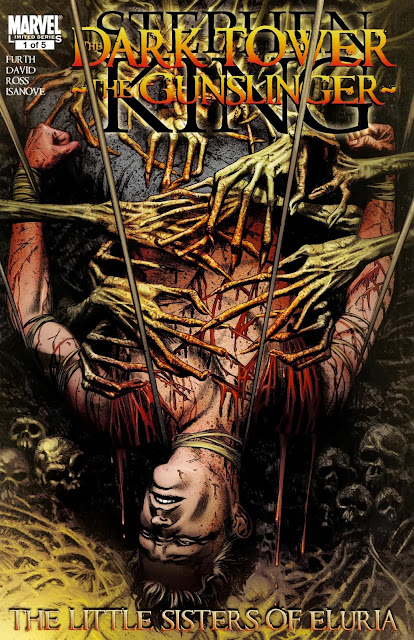 Marvel Comics, along with the core creative team of plotter Robin Furth and scripter Peter David, have been toiling away on these Dark Tower comics for over four years now.  It's been an interesting run, too, and while I haven't enjoyed every decision they made along the way -- I still think the story of Roland and Susan Delgado (the story that comprises the bulk of the novel Wizard and Glass) was told in far too rushed a fashion -- I have definitely enjoyed the series overall.

Jae Lee Announced As Artist For "The Wind Through the Keyhole"

Proving that it's a good idea to visit Talk Stephen King at least twice a day if you're a King fan, I learned from that site today that Jae Lee -- who was the primary artist on the first several arcs of Marvel's Dark Tower series -- has been chosen to provide the illustrations for The Wind Through the Keyhole.

In the humble opinion of this 'yere blogger, Jae Lee is an awesome choice, and I salute whomever made it.  Whomever?  Or is it "whoever"?  Doesn't matter; pressing on.

Look, can I be honest for a minute here?  I'd be an irresponsible blogger if I didn't fess up to something: what with all the talk over the past half-week or so about the Dark Tower movies grinding to a halt and teetering on the verge of being scuttled altogether, I feel like I've neglected the only Dark Tower news of late that is genuinely, crucially important: there's a new novel in the series coming out next year!!!!!

I mean, hey, don't get me wrong, I want to see the movies; especially if Roland is going to be played by someone as badass as Javier Bardem, and especially if someone of the caliber of Ron Howard is going to be directing them.  But at the end of the day, I can live without them.  It's the books that really matter, and I keep managing to all but forget that Stephen King has written a new one, and that it is only about a year away from publication.  That's pretty darn exciting, and I feel bad for getting wrapped up in the current negativity cetered around the possible fact that the movies won't be happening; with a new novel on the horizon, the rumors about the movies should be of mild distress at worst.

The news about Jae Lee being brought onboard as the illustrator has jolted me back to reality a bit, though.  Lee did pretty doggone stellar work on the comics, and I'm curious to see what he does for the novel.  I do not know his work at all outside the confines of the Dark Tower comics, so I don't know if he has done lots of non-comics work or if it is something relatively (or entirely) new to him; I don't know what to expect, apart from something of quality.  You know, something like this: 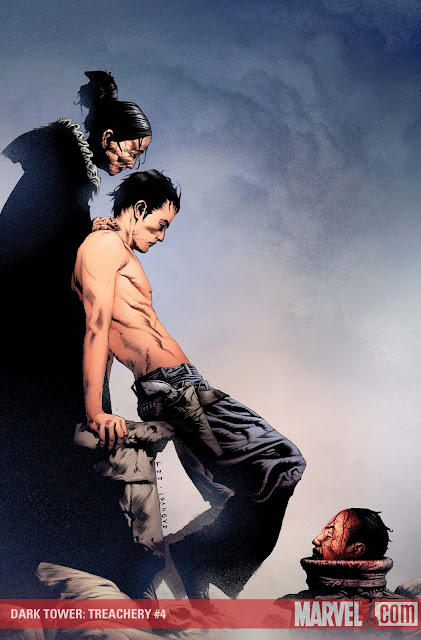 Email ThisBlogThis!Share to TwitterShare to FacebookShare to Pinterest
Labels: Game of Thrones, Jae Lee, Richard Isanove, The Dark Tower, The Wind Through the Keyhole

They See Us: "Nightmares in the Sky"

﻿Published in October 1988, Nightmares in the Sky is a Stephen King book that many Stephen King fans may not be aware of.  It's a book of photographs of gargoyles, as taken by someone going under the amusing pseudonym f-stop Fitzgerald; its primary function was as a book of photography.  However, to gussy the thing up a bit -- and to give sales a jolt during the first year since 1976 when King had not published a book (the last such year, so far) -- the publisher enticed King into providing an essay to accompany the photos.  The essay runs about thirty-five pages, though a great deal of the page space is taken up by photos; the book itself clocks in at about 125 pages.

The book is out of print, and I get the feeling that it's almost entirely forgotten by anyone other than King fans, and then only the more obsessive ones.  Possibly, it is also remembered by fans of f-stop himself, about whom I know nothing; he may have tons of fans, or none whatsoever, and I'd never know the difference.  Maybe it's also a big deal to photography or sculpture enthusiasts; I don't know, and I'm not too worried about it one way or another.

What I'll worry about is this: is it any good? 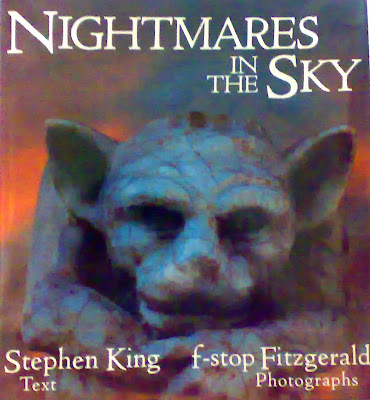 The answer to that question is: well, it's not bad, but it's no blue-ribbon winner, either.