That Awful Woman From the History Department: "The Dark Half" Revisited, Part 3

Earlier this year when I did a multi-post retrospective of The Tommyknockers, I had a lot of fun writing the one wherein I discussed the crossovers that novel has with other works in the King canon (such as The Talisman and The Dead Zone).  I began this blog by writing about Misery, and the reason I started there was simply because that was the point I was at in chronologically rereading all of King's books.  That means that eventually, I'll read -- and blog -- my way all the way through to whatever the then-current novel is whatever he publishes in about 2017, at this rate!); and probably at that point I'll go back and work from Carrie back to The Drawing of the Three just so the blog has covered everything.

I mention this mainly so I can pledge that as long as I keep doing this, I'll make a point out of setting aside one post for every book wherein I discuss that book's ties to the larger King storytelling universe.  I'm hardly the first person to tackle that project, but that's fine by me; I ain't in this to blaze no trails.

There isn't a huge amount in The Dark Half to talk about in terms of crossovers with other King books, so I'll use the final part of this post as a grab-bag to dispense with the remaining thoughts I've got that I couldn't -- or didn't -- work into the first two posts.

First of all, a confession:

Email ThisBlogThis!Share to TwitterShare to FacebookShare to Pinterest
Labels: Creepshow, Pet Sematary, The Crate, The Dark Half

It Takes a Hero to Keep On Squeezing: "The Dark Half" Revisited, Part 2

“You’re a ghost,” he said.  “A weird kind of ghost.  We’re all standing here and looking at a ghost.  Isn’t that amazing?  This isn’t just a psychic incident; it’s a goddam epic!”  -- (Chapter Twenty-five)

One of the most problematic elements of The Dark Half is the (seeming) lack of clarity on the subject of what, exactly, the corporeal version of George Stark is.

The above statement from Thad -- uttered to George himself -- is probably the most definitive information we get ... but should we assume that Thad knows what he's talking about?  I don't know that that would be a safe assumption at all.

So let's spend a bit of time trying to figure out what's up with Mr. Stark. 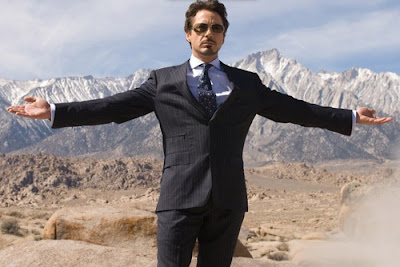 Whoops!  Wrong Stark.  (We know what's up with that Stark: an overdose of awesomeness.)

Read more »
by Bryant Burnette at 4:34 PM No comments:

Email ThisBlogThis!Share to TwitterShare to FacebookShare to Pinterest
Labels: The Dark Half

It's Good to Have Him Dead: "The Dark Half" Revisited, Part 1

A few weeks back, I threatened promised to post an essay dealing with The Dark Half, which I'd recently finished rereading, and guess what?  The time has come.  It is here.  I've finished taking notes, I've got the day off from work, and I'm sitting down at the computer to type it all up.  I'm sure it's going to be fun to write, it's just that ... well ... I keep hearing these rustling sounds outside, and these little chirps.  I think there might be some birds outside.  Usually, this makes my cats go sit with their faces in the window, making these little frustrated noises, like they're trying to tell the birds, "Oh, you let us get out and see what happens to you."  But today, they're all hiding, almost as if they're afraid of the birds.  Hmm.  I hope it's nothing for me to be worried about. 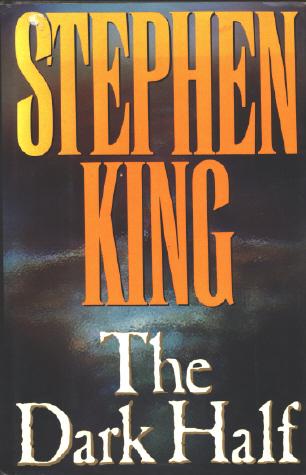 The Dark Half has never been one of my favorite novels by Stephen King.  I enjoyed it reasonably well when I first read it, but never had much urge to read it a second time.  In that fashion, over time I began ranking the novel near the bottom of my list of personal favorite King books.  And yet, upon rereading it, I found it to be a considerably better novel than I'd been giving it credit for over the past couple of decades.

Email ThisBlogThis!Share to TwitterShare to FacebookShare to Pinterest
Labels: Misery, Richard Bachman, Roadwork, The Dark Half, The Dead Zone, The Drawing of the Three, The Tommyknockers

Remakes Gone Wild!; or, Attack of the Killer Remakes!; or, The Idea Well Done Dried Up, Ma!

If you bothered to go to a multiplex this weekend -- and if the box-office figures from Friday are any indication, you didn't -- then you might have noticed that at least three of the movies currently showing are remakes of older films: Fright Night and Conan the Barbarian and Rise of the Planet of the Apes all fit that bill to one degree or another.  For that matter, Captain America counts as a remake, too, in a kinda/sorta sorta way. 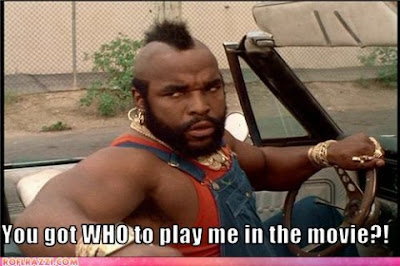 I could continue listing these things, but you get the point: Hollywood seems to be more or less out of ideas.  Luckily, they are NOT necessarily out of talent, as the new versions of Fright Night, The Karate Kid, and True Grit help to illustrate.  And with that in mind, I'm going to pose a question to myself and then answer it:

Which Stephen King movies ought to be remade?

Email ThisBlogThis!Share to TwitterShare to FacebookShare to Pinterest
Labels: Carrie, The Shining

The Truth Inside The Lie is a blog that is (mostly) about Stephen King books/movies/etc.  The remake of Fright Night has nothing whatsoever to do with Stephen King.  I am the author of The Truth Inside The Lie.  I liked the remake of Fright Night and want to write a review of it ... but how can I spin it so as to make it seem appropriate for a King-centric blog?

Well, dig this: the original Fright Night was written and directed by Tom Holland, amongst whose later work would be two Stephen King adaptations: The Langoliers and Thinner.

AND -- as if that wasn't enough -- it stars Anton Yelchin, who formerly starred in Hearts In Atlantis as Bobby Garfield.

What's that you say?  It's my blog, so I don't have to make excuses to post things that aren't (strictly speaking) related to S.K., I just have to do it and shut up about it so nobody has to read intros like this?

Well, jeez, why dontcha just take all the fun out of things? 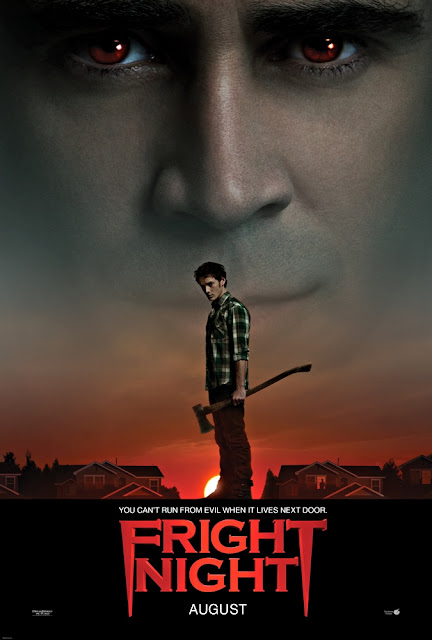 Oh, right; I was going to review a movie.  Allons-y!

The Afterlife Was Always On His Mind: Joe Hill’s "20th Century Ghosts"

As you might have guessed, I am a bit of a nerd on the subject of Stephen King. I guess we’re all gonna have to agree to just be okay with that, and odds are good that if you’re reading these words, you’re already okay with it.

However ... sometimes I think I might have taken my obsession too far. No, no, don’t misinterpret me: I haven’t set any traps in the road so that the next time Big Steve comes driving by I can topple his car into a ditch and then spend the next few months nursing him back to health at an isolated farm all so I can force him to finish writing The Plant. No, no, that’s not something I’ve been planning; why, that’d be crazy.

Instead, I have occasionally wondered if I haven’t taken my obsession a bit too far by moving from collecting S.K.’s books and stories to collecting the various books written by his family members. I’ve got most of Tabitha’s novels, and while I’m ashamed to say I haven’t read any of them, I plan to read Small World soon. I’ve also got Owen King’s excellent collection of short stories, We’re All In This Together.

But today, however, I’m here to chatter at you about Joe Hill. Having just finished reading his collection of short stories, 20th Century Ghosts, I find that the urge to chatter about it is almost entirely irrepressible. I can say without any reservation that I am now roughly as addicted to reading Joe Hill as I am to reading Stephen King, and let me tell you, that realization comes paired with a big ole sigh of relief. See, my S.K. obsession dictates that I buy all of Hill’s stuff anyways; even if it was awful, I’d have to buy it. So finding out that not only is Hill’s writing decidedly not awful – that not only is it good, but awesome – is a relief somewhat akin to the jubilance crackheads might feel if the Surgeon General were to issue a press release tomorrow revealing that smoking rock is actually an aid to good blood pressure, whiter teeth, and a sunnier all-around disposition. 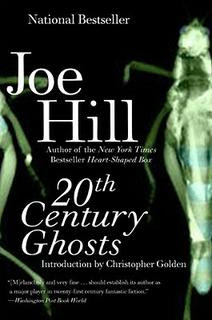 When Should I Stand, Exactly?

I was thinking -- because I've got nothing better to do (you'd be shocked at the extent to which that's a true statement) -- last night about the supposedly-upcoming films based on The Stand, and I got to contemplating something specific about them:

Or will we see the story be updated to modern times, to try and make the films seem like something more current?

My money is on the latter, and I'll tell you why that doesn't bother me in the slightest.

Email ThisBlogThis!Share to TwitterShare to FacebookShare to Pinterest
Labels: The Stand

Asassination of the Lambs? The Silence of the Kennedys?

Well, the news continues to pop on the S.K. movie front.  Today's bit of saliva-inducing news is that this guy has scored the rights to produce, write, and direct the adaptation of King's upcoming novel 11/22/63: 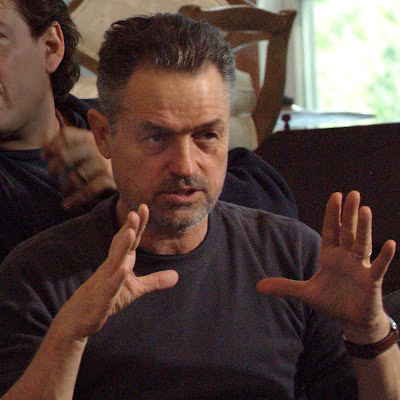 Email ThisBlogThis!Share to TwitterShare to FacebookShare to Pinterest
Labels: 11/22/63

Media Violence, Stephen King, and You!; or, The Schwarzenegger/Spielberg Connection

Over at the The King Cast, Bob LeDrew recently did a couple of very interesting podcasts on the subject of media violence.  If you haven't heard them yet, you should go to iTunes and check 'em out, but the short-short version of the story goes something like this:

A child psychotherapist in New Zealand recently made a bit of controversy by coming out and stating that she had treated no fewer than five patients -- all between the ages of 12 and 18 -- who had been traumatized by having read books by Stephen King.

LeDrew initially attempted to get the psychotherapist to come onto his show and do an interview; she politely declined, and he decided instead to delve into the general topic of media violence by talking to a couple of experts, one a media psychiatrist and the other a lecturer who specializes in pop cultural studies.  He got two entertaining podcasts out of the topic, and they got me to thinking about where I stand on the issue of violence in the media and the effects it might potentially have on individuals and on society as a whole.

Then I remembered that I'm not qualified to speak to such topics . . . but decided to go ahead and do it anyway.

Here's the thing: I'm not an expert on any subject.  The sole exception to that is that I consider myself to be an expert on the subject of myself.  So, what I'd like to do here is take a bit of an autobiographical sojourn, peering back through the shimmering veils of time at the ancient days of the late 1970s and early 1980s.  Through that mist, we might be able to see a young man named Bryant Burnette, trying to learn how to live in a world that sometimes frightened him.  Can we extrapolate anything from the lessons we might learn by peering into those long-gone times?  Can we use those extrapolations to come to any sort of determination as to what extent individuals and society can be affected by media violence?

Probably not; but it's worth a try.