Here's a cool thing I discovered: that key on my laptop which says "prt sc" is useful, especially when a DVD is playing.

As proof, and as a Halloween treat, I offer this gallery of screencaps from Salem's Lot.  Not much rhyme or reason to the selection process; I just grabbed stuff I thought was cool.

Earlier this year, I decided to finally pull the trigger on reading something by Stephen King's son, Joe Hill.  (I'd already read We're All In This Together, the excellent story collection by King's other son, Owen King, so I figured it was high time to do my diligence and give Hill a shot, too.)  I started with the first volume of his excellent comic book, Locke & Key, then moved on to his own story collection, 20th Century Ghosts, which blew me away.

Frequent readers of this blog will by now probably have figured out my customary attack pattern when it comes to writing about novels: I prefer the old multi-part-post method, wherein I take three or more posts and spend some time living with the novel at hand, trying to work through the various facets of it which stand out to me.  I've only done that with Misery, The Tommyknockers, and The Dark Half so far, as well as to the Marvel Comics version of The Little Sisters of Eluria ... but trust me, more is on the way.  This is an ongoing project, one I don't anticipate ending in a year the first three numerals of which are "201."  And I've got longer-range and vastly more ambitious plans that that, too; whether I can bring any of them to fruition is another matter altogether, but plans are most definitely in the works.

With that in mind, allow me to explain why I'm not giving the multi-post treatment to Horns.  Trust me when I tell you that it ain't because Joe Hill's novel doesn't deserve it; it deserves it.  No, it's for two other reasons: firstly, it's because I've only read the novel once, and therefore don't feel like I'm familiar enough with it to write about it at more than a cursory level; and secondly, it's because it's still a relatively new novel, and I'd therefore like to give my audience more time to read it without me spoiling it for them.  After all, my lengthier essays are always written with the assumption that anyone reading them is familiar with the books/movies/etc. that I'm discussing.

This, then, is more along the lines of the type of review which is designed to sway you one way or another in answering the question of whether to read the book in the first place.

And here's a spoiler for the rest of the review: you should read Horns. 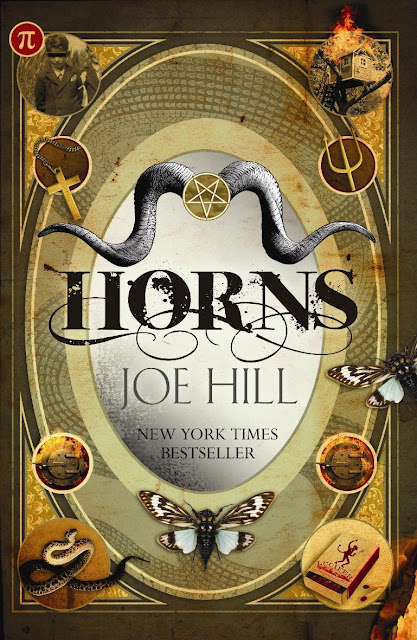 Read more »
by Bryant Burnette at 5:27 PM No comments:

A Review of "Marriages" and "Under Venus" (by Peter Straub)

In a lot of respects, I'm a lucky person.  Not as lucky as I'd wish to be, but luckier than a lot of people.  For example, I have a job that I enjoy most of the time (not always, but at least four days out of five).  Lots of folks don't even have jobs, and lots of people who do probably don't enjoy them as much as I enjoy mine.  Heck, even the ones who make significantly more money than I make are probably, in many cases, also significantly less happy with their jobs; fun jobs and great paychecks do not always go hand in hand, after all.

That doesn't mean, however, that I wouldn't abandon my job in nine seconds flat (that's the amount of time I figure it would take to chuck my keys at someone and make it to my car) if, somehow, an opportunity arose to write this blog for a living.  I would.

And IF such a thing should ever come to pass, one of my goals for the blog would be to expand its scope to include other authors whose work I love: Larry McMurtry might be tops on that list of runners-up (although his subject matter might simply call for a separate blog), but there's also Ray Bradbury, Robert A. Heinlein, Philip K. Dick, Alfred Bester, Frank Herbert, Arthur C. Clarke, Clive Barker, Harlan Ellison, H.P. Lovecraft, Alan Moore, etc.  In all of those cases, I'm nowhere near as knowledgeable as I'd like to be.  And then there are the Richard Mathesons, Isaac Asimovs, and Neil Gaimans of the world: people whose work I'm almost sure I would love, but have somehow never found the time to read.

And don't even get me started talking about how many things there are that I'd like to write about in the world of movies and teevee.

However, I DO want The Truth Inside The Lie to include at least a few side-trips away from the Stephen King universe, and to that end I've started reading the novels and stories of Peter Straub.  I'm not totally unfamiliar with Straub: obviously, I've read The Talisman and Black House (co-authored by Stephen King [he said, as if you didn't already know that]), but I also, at the time of my initial devouring of King's works twenty years ago, read several Straub novels such as Ghost Story, Shadowland, Floating Dragon, and Koko.  I remember liking all of them -- and LOVING Ghost Story -- but I never made keeping track of Straub a top priority.

I've decided to change that, though, and to start by working my way through his bibliography, chronologically, beginning with his first novel (1973's Marriages).  This is not going to happen all at once; in fact, I'd be surprised if I got to more than three or four of them a year, which puts my completion date somewhere in the 2020s, I think.  But that's okay; I'm not planning on going anywhere, and who knows ... maybe some Bill Gates-esque mahfah'll stumble onto this post, feel charitable, and wing a few mil at me in a gesture of fool benevolence, at which point in time I'll get to accelerate my schedule considerably.  Unlikely, but not quite impossible.

Until then, though, we're stuck with the time I've got, which has been sufficient to allow me to finish Straub's first two novels, Marriages (a rather self-consciously Serious work from a young writer who had not found his voice) and Under Venus (a considerably better novel, albeit one which did not see publication for over a decade after its composition, by which point in time Straub's fortunes as a novelist had changed quite a bit).

So let's dive in for a look at these early novels by a man who is one of the few people who can legitimately claim to be a creative peer of Stephen King. 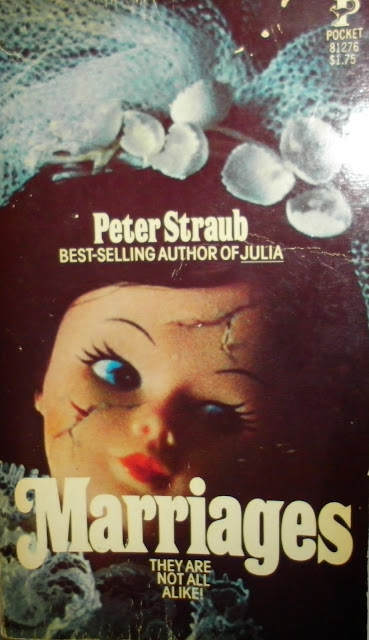