Say, are you a Bag of Bones fan?  Are you looking forward to the Mick Garris-directed movie coming up on A&E this December 11-12?

If you answered yes to those questions, then you need to check out a website: Dark Score Stories, which contains a lot of photo-essay material, as well as some audio clips of characters from the movie. 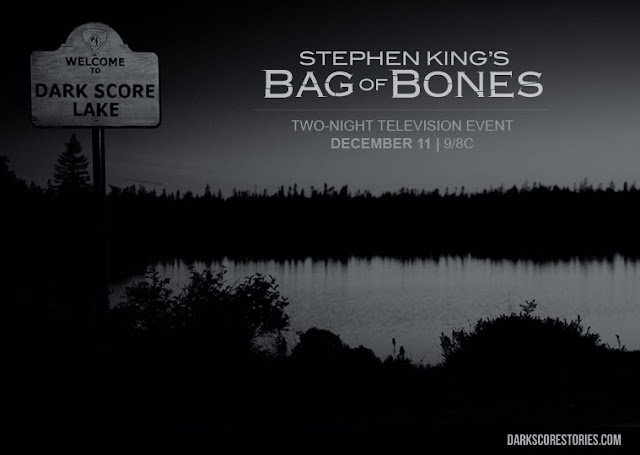 If you're familiar with my site, then you're also probably aware that I've been somewhat opposed to this movie.  I'm not a Mick Garris fan at all: I feel like the movies he's made from Stephen King books and stories have been, on the whole, fairly poor.  The Garris/King association began with the wretched Sleepwalkers, and has gone on to include The Stand, The Shining, Quicksilver Highway (the "Chattery Teeth" segment was based on the King short story of the same name), Riding the Bullet, and Desperation, all of which have been problematic.  I'm aware that Garris has a lot of fans in the King community; I'm not one of them.

So, naturally, I've been dreading Bag of Bones.  This was not helped by the apparent miscasting of the lead role (Mike Noonan doesn't exactly scream "James Bond," and while I know that Pierce Brosnan is more than a former 007, it's hard not to see the suave spymaster anytime he's on screen), or by the apparent major changes to the plotline involving Mattie Devore.

I'll say this, though: Dark Score Stories has turned my opinion slightly back toward the positive.
The photo essays are fictionalized, by which I mean that they are a part of the narrative within which the movie itself takes place (not photo essays about the making of the movie).  Here, the essays are written (and the photos taken) by an unnamed character who was sent to Dark Score Lake by his/her publisher, Zenith House.  The essays are nothing special; they're just a prop to hang the photos on, and many of the photos -- there are roughly eighty in all -- are beautiful.  They were taken by Joachim Ladefoged, who appears to be rather talented.  I know very little about photography, but I know when I see a purty picture, and there are a lot of purty pictures here. 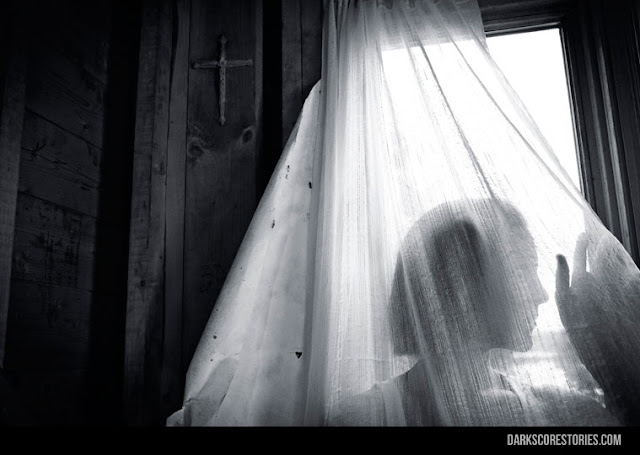 As several other sites, including Lilja's Library, have pointed out, there is a lot of fun to be had here in scrolling through the photos and checking out the many amusing homages to other Stephen King stories.  Bag of Bones (the novel) has a great many tie-ins, including ties to Insomnia, Gerald's Game, The Dark Half, and It, so it's completely appropriate for the movie to follow suit.  It's hard to say how many of these will end up in the movie, of course, but examining the photos, I found references to the following:
There are probably tons more that I didn't recognize.  Lots of fun.  Here's one of my favorite shout-outs on the site: 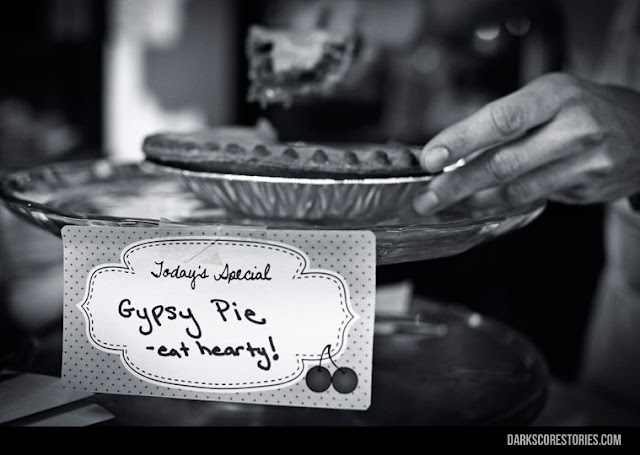 There is a TON of love for the Stephen King universe evident in the set design of these photos, and a lot of artistry on display in the photos themselves.  If the movie overall manages to have this passion and artistry, then we might be in for something special. 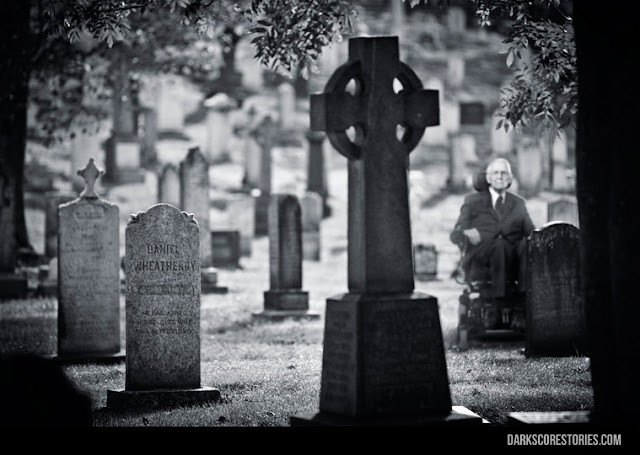 But Dark Score Stories, the website, does, after after spending an hour or so poking around on it, I feel a lot more excitement mounting for the movie than I would have thought possible.  Regardless, the site itself is a beaut.

Go check it out, won't you? 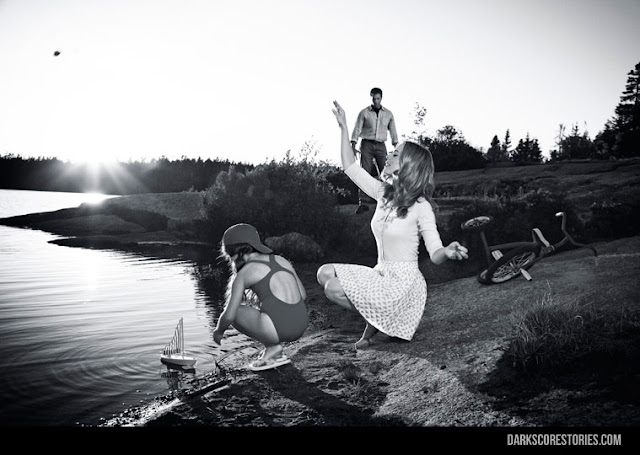 In the second part of my review of 11/22/63, I'd like to focus on the ways in which the novel crosses over with other stories in the King universe.

Obviously, 11/22/63 spends a fair amount of time playing in the same stomping-grounds as did another famous epic novel: Derry, Maine, in 1958, which was the setting for about half of It.  That novel, which has major themes involving the intractable nature of time's passage, is my favorite by King; revisiting it might well have proven to be disastrous, and in the hands of a lesser writer probably would be.  King, of course, often cross-pollinates his works (e.g., having Ralph Roberts from Insomnia pop up in Bag of Bones), and I cannot off the top of my head think of an instance in which he's done so to the detriment of his work.

Here, what happens to the story of It as a result of the events of 11/22/63 is that it concretizes the notion of time as an active force in our lives; this was a major element of It in the sense that the characters of that novel are keenly aware that their childhoods have ended, and that while they might hold on to some aspects of their past, they can never truly regain them.  They are engaged in their own peculiar sort of time travel; it is figurative rather than literal, but they are both successful AND unsuccessful in their attempts, just as Jake is.  Furthermore, the structure of It -- which bounces back and forth between past and present -- makes time an even more active element of the novel; for our purposes as readers, the past and present are both active, and toward the end of the novel the two begin to merge.  It would have been troublesome for 11/22/63 to work against those themes, but it doesn't; it deepens them.

As such, the appearance of both Beverly Marsh and Richie Tozier -- whom we meet maybe a month after the 1958 portion of events from It -- is an absolute delight.  They sound just right: it seems as if they walked straight out of that novel and into this one.  No mean feat on King's part, that; he's revisiting a 25-year-old novel, and doing so with complete success. 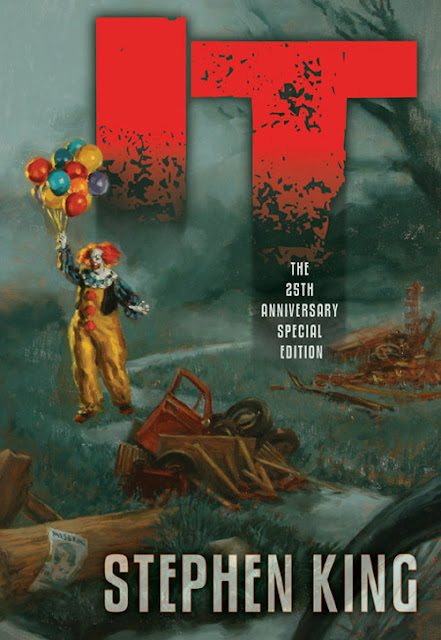 Email ThisBlogThis!Share to TwitterShare to FacebookShare to Pinterest
Labels: 11/22/63, Christine, It, Salem's Lot, The Dark Tower, The Drawing of the Three

The broker offered a dark smile.  "On Greenville Avenue you can never tell what's gonna happen.  Man blew his own head off just a block and a half from here a few years ago."
"Really?"
"Yessir, outside a bar called the Desert Rose.  Over a woman, accourse.  Don’t that figure?”
“I guess,” I said.  “Although sometimes it’s politics.”
“Nah, nah, at the bottom it’s always a woman, son.”

Here's the first thing you need to know about this review: unless you have already read 11/22/63, you shouldn't read any further than this sentence.  The reason for that is simple: I want to write a bit about some of the things that I think make the novel work so well, and I can't do that without being free to talk about the story in its entirety.

You don't want to be spoiled to that degree.  Even if you think you do, you don't: this novel deserves to be read with as little foreknowledge of its contents as is possible.  I knew too much about it going in (although some of what I thought I knew ended up being false info), and while that didn't hamper my enjoyment of the novel in the slightest, I still wish I had had a completely unburdened first read.

So, if you're planning on reading the novel -- and if you aren't, why on Earth are you reading this review? -- do yourself a favor: go read it, and then come back here.

In order to provide a bit of a transition before I get into the review, I offer this: 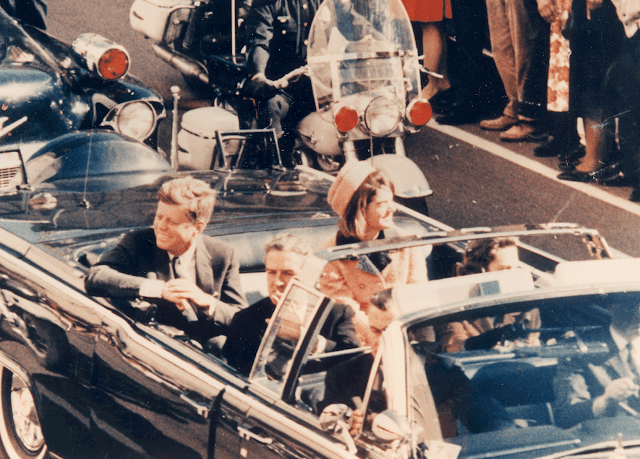 Email ThisBlogThis!Share to TwitterShare to FacebookShare to Pinterest
Labels: 11/22/63

11/22/63 is awesome.  It is, in my opinion, the best novel Stephen King has written since Wizard and Glass way back in '97. If you're bothering to read a fan blog like this one, I'd say there is almost no chance that you won't enjoy the novel.

A word of caution: if you have managed to keep yourself in the dark about the novel's plot developments, then please try and find a way to keep that lack of knowledge intact.  Avoid reading reviews; avoid reading interviews with King, or watching his recent television appearances.  Most of these that I've read/seen haven't been too spoilery on their own, but added up, they gave me way more knowledge about the novel going in than I would have preferred.  It did not by any means ruin my experience of reading the book, but I do wish I'd known a bit less.

So, if you can keep yourself from being spoiled, I'd urge you to do so.

Speaking of which, you definitely want to stay away from the next review of the book I'll be writing, which will spoil the entire plot in the interest of getting at the heart of this extraordinary new novel.  Nosir, that review, when it materializes a few days from now, will be strictly for people who've already read this whopper of a tale.

Until then, just remember: Wetmore a good name for you...!