A Review of "Julia" (by Peter Straub)

It's going to be a quick one today, folks, at least as regards the actual review of Julia -- not because it isn't a novel worthy of lengthy discussion (it is) or because I'm in a rush (I'm not), but because I'm possessed of a lousy memory, and therefore can't remember exactly what it was I wanted to say about the novel.  More on that later, but since I assume it'll be of interest primarily only to myself, I'll forgo the self-indulgence until the end. 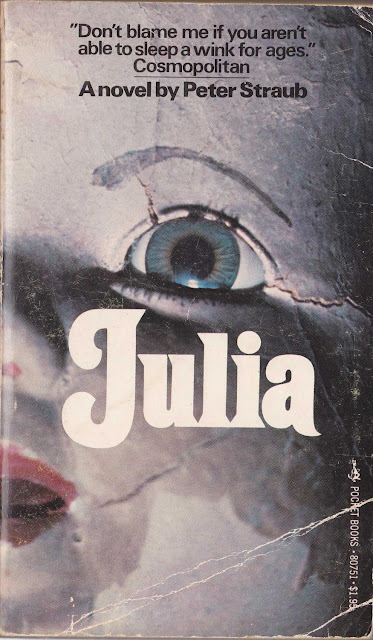 This is the latest in what will be a series of reviews of Peter Straub's work.  I decided that seemed like a logical thing to do on a Stephen King blog, if for no other reason than that the genre fits, but an even better reason is that while a lot of us King fans think of both The Talisman and Black House as being primarily Stephen King novels, it's a mistake to do so.  They are Peter Straub novels as much as they are Stephen King novels; even more so, for all I know.  Either way, it is fair to say that in order to have a full understanding of those two novels, it helps to know the other works by both authors.

So, this is me attempting to do just that.  Plus, I read several Straub novels in high school, liked them all, and have always felt guilty for not following his career a little closer.  In other words, I'm a lapsed Straub fan, and this makes for a good motivator to removed the word "lapsed" from that equation.

Last year, I got the process underway by tackling his two early non-horror novels, Marriages and Under Venus (the combo review of which can be found here).  Reading those novels was not exactly my idea of top-notch fun: Under Venus was mildly engaging, but Marriages is a near-total misfire of a novel.

However, reading them did have a good result: it made Julia stand out moreso than it would otherwise have done, and I think the reading of it was enhanced by the familiarity I'd developed with Straub's early works.  As I've said, Under Venus is not a great novel -- it may not even be a good one --  but it is certainly a vast improvement over Marriages.

Julia, in turn, is a vast improvement over Under Venus, and I have no hesitation in saying that this one assuredly IS a good novel.  Maybe not a great one, but definitely a good one.

The protagonist is a woman named Julia Lofting, who at the novel's outset is in the process of impulsively purchasing a new home for herself.  She is separated from her husband, Magnus, an overbearing tyrant with whom she once had a daughter; that daughter, Kate, died recently, apparently the result of a botched tracheotomy performed by Magnus when Kate began choking on a piece of food.  Julia has decided she must remove Magnus from her life, and so she has used her own money -- which is substantial -- to buy a house.  This being a ghost story, it turns out the house is haunted.

Straub spends a good amount of Julia keeping the reader off balance: we're never entirely sure if the haunting is actually happening, or if it is a product of Julia's damaged psyche, or if the truth lies somewhere between those two options.

As readers of The Talisman and Black House who have never investigated Straub's solo work may nevertheless have guessed, Straub's style is considerably different from King's.  King invites the reader in with a beckoning arm around the shoulder and a beer to welcome you inside; Straub -- and I'm basing this purely on his first three novels -- is a bit more apt to invite you in and then sit down with you in the parlor, simply looking back at you as you try to figure out what's going on.  Eventually, you are offered tea and biscuits.

This approach is perhaps not for everyone, and for that reason I am somewhat hesitant to recommend Julia to fans of Stephen King.  I enjoyed the novel quite a bit, but then, I don't mind sitting in a room, staring at someone who's staring at me, waiting for something to happen.  I'm a Stanley Kubrick fan; his movies were the filmic equivalent of that in some way, and it would be fascinating to visit the parallel universe where Kubrick made a movie out of Julia rather than The Shining; in many ways, it would have made a better fit for his sensibilities.

One aspect of Julia that is notable is that it was a near-total shift in subject matter for Straub.  His first two novels were relationship dramas, and neither of them had been successful; in fact, the second one, Under Venus, had not even been published (and would not be until the mid-eighties).  Whether turning to the horror genre was a calculated move to become a part of a field that was in the midst of a serious surge in popularity (thanks in no small measure to the book and movie phenomenon that was The Exorcist) or whether Straub simply wrote what moved him and got lucky, I can only speculate, but the latter seems more likely to me.  Either way, he slips into the genre with shocking ease, sounding perfectly at home in his new surroundings.  He's a bit more lucky than his haunted protagonist in that regard.

And yet, at no point does Straub seem to be stooping for effect: no, instead he has retained (and vastly improved) the density of emotional stand-offishness that he employed in his first two novels.  Those novels featured characters who behaved in odd, destructive ways for reasons that often escaped them, and also escaped us; here, Julia -- and her small but compelling cast of associates -- behave just as oddly, with similarly self-destructive results, but we understand the reasons for it, even when they don't.  Or, failing that understanding, we are made aware that out lack of understanding is a part of the narrative.  Straub isn't 100% successful at this 100% of the time -- he occasionally falls back on the old trope of having a character be vague when it makes much more sense for them to be explicit -- but he gets it right way more than he gets it wrong.

You can practically feel him finding his true calling here, and that added a lot to my experience of reading it.

For those of you who are interested, there was a movie made from this novel.  Known during its British release as Full Circle, it was given the more appropriate title The Haunting of Julia when it was released in America.  It came out in 1977, and stars Mia Farrow, who seems perfect for the role of Julia.  It's lapsed into obscurity, and does not appear to be available on DVD, but YouTube seems to currently have the entire thing.  I've never seen it, but I have just bookmarked the page and will try to watch it soon.

Thus endeth the review.  I'd like to move along now to a bit of navel-gazing, and if you want to jump ship and find something better to do with your time, I don't blame you one bit.

You may have noticed that I didn't have much of anything substantive to say as regards Julia.  Well, there's a simple reason for that: I can't remember enough about it to be substantial in my comments.  I read the novel last November (immediately after finishing 11/22/63), and I broke from the methods I've been using while working on this blog: I did not, upon finishing the book, go back through it and make notes on what I wanted to write about it.

In some ways, that's just fine.  After all, my primary goal here is to write about Stephen King's books, and any time I spend writing about someone else's is time I'm not writing about King's.  From that point of view, it makes sense to me to not put the focus on Julia in the same way I would on, say, 'Salem's Lot.  My brain understands this.

However, my gut tells me that the reason I'm reading Straub in and writing about him in the first place is because it can and will give me a richer understanding of King's works; of two of them, at least.  Therefore, failing to give Julia its due by not reading it in the same way, and then by not writing about it in the same way, is counter-productive to my own goals.  What I should have done was spend the time I needed to spend, rather than find myself fumbling through the pages of Julia five months later, trying to remember what I'd thought was important about it.

As I mentioned earlier, I do have a lousy memory, at least in terms of retaining information I've read.  The more I think about it, the more likely it seems to me that a big part of the reason why I decided to start blogging about King's books last year is to provide a workaround for that memory problem.  For one thing, it's making me slow down while reading, and reading in a slower, more deliberate way means that I'm comprehending the text in a different, more in-depth way; it's the only possible outcome.  I've been forcing myself not to take notes as I read, by the way; doing that causes me to enter analysis mode too aggressively, and causes me to stop actually enjoying what I'm reading.  I'm not into that; I read to enjoy, and write to express that enjoyment, so the notion of stopping the enjoyment seems counter-productive.

So I don't do that.  Instead, once I've finished reading, I then go back and do some deep re-skimming of the text, and at that point, with things fresh in my mind, I begin taking notes.  Once I've finished doing that, then I'll sit down and go through the notes, identifying what seem to be the major areas I've concentrated on.  From that point, I figure out what to write about, and how many posts to break it into.

So far, I've done that with three of King's books: Misery, The Tommyknockers, and The Dark Half.  It's an intensive process, and one I ought to have followed in reading Julia.  Ah, well; I'll know better next time.

Speaking of King, I've been rereading his books in chronological order over the past few years, and Misery was where I just happened to be when I had the bright idea of starting this blog.  Next up on the list: the uncut version of The Stand, and I've put off getting started on that WAY longer than I should have.  As you can imagine, reading, taking notes on, and then writing about that whopper of a novel is going to be time-consuming (though fun), and it may be that that knowledge is what's been holding me up.
by Bryant Burnette at 8:51 PM