That Road Must Go Somewhere: A Review of "Heart-Shaped Box" (by Joe Hill)

I've been campaigning -- proselytizing, even -- for the works of Joe Hill ever since I started reading them last year.  Nobody'll ever get elected to anything with ME as their campaign manager, but since I'm an unpaid intern, I just do what I can.

Well, I lost control of that metaphor pretty quickly, so let's knock the bullshit off and get down to business. 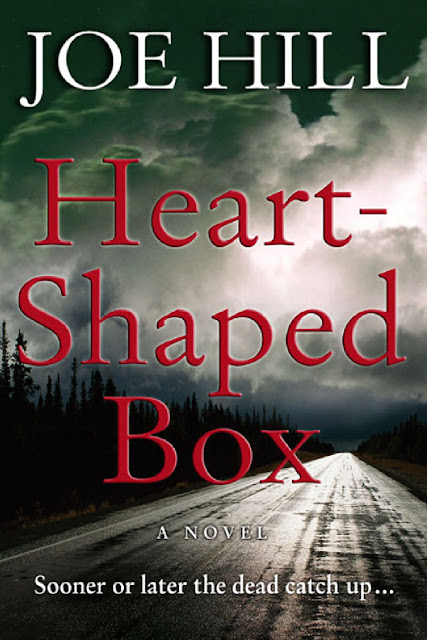 This is a great novel.  Not a surprise; everything I've read by Hill has been great, and this novel -- his first -- did not disappoint.

Here's the setup: Judas (who is mostly referred to as "Jude") Coyne is a somewhat over-the-hill superstar of hard rock (or possibly heavy metal, if you prefer).  He's somewhat in the vein of Ozzy Osbourne or Vince Neil or Dee Snyder.  Partially to keep up his image and partially because this is who he really and truly is, he has a collection of macabre memorabilia, much of which consists of things fans have purchased for him.  Such items include a sketch -- of the Dwarfs from Snow White and the Seven Dwarfs (!) -- by John Wayne Gacy, a 16th century skull of some poor soul who got trepanned, a three-hundred-year-old confession letter written by a supposed witch before she was killed, and so forth.

As the novel begins, Jude's assistant brings to his attention an Internet auction:

Many of the objects in his private collection of the grotesque and the bizarre were gifts sent to him by his fans.  It was rare for him to actually buy something for the collection himself.  But when Danny Wooten, her personal assistant, told him there was a ghost for sale on the Internet and asked did he want to buy it, Jude didn't even need to think.  It was like going out to eat, hearing the special, and deciding you wanted it without even looking at the menu.  Some impulses required no consideration.  -- (p. 4)

I don't think it's much of a spoiler for me to reveal that Jude does in fact purchase the ghost, and that he ends up actually receiving a ghost in the mail ... and that this turns out to be a distinctly unhappy purchase.  From there, what the novel deals with Jude's attempts to return his purchase, which ends up being even more difficult than is typically the case with things you buy through an Internet auction.  Eventually, he has to go on a nightmarish road trip to try and set things right.  Joining him: his current ex-groupie girlfriend, Georgia.  Also along for the ride: Jude's conflicted memories of a former ex-groupie girlfriend, Florida.  Jude tends to think of his ex-groupie girlfriends in terms of where they came from moreso than who they actually are (a moderately demeaning attitude that partially explains the fix he now finds himself in).

One of the themes running through the novel is one of identity: self-identity, the way we see and think about each other, and so forth.  If you read the name "Judas Coyne" and rolled your eyes a little bit -- I certainly did -- then you probably had the correct reaction: it is a hilariously over-the-top stage name, and one that can't help but make you chuckle a derogatory (if simultaneously approving) little chuckle.  But is it any more ridiculous than, say, "Rob Zombie" or "Marilyn Manson" or "Johnny Rotten"?  Nope; if anything, it's more subtle than those.  However, in the real world, I don't know that Rob Zombie or those other fellows ever expected anyone -- except maybe for teenagers -- to take their names seriously; they knew it was all a joke, and they knew we knew it was a joke, and we knew they knew we knew it, and so forth.  It's all part of the theatrics that come along with that kind of music; it's part of what makes it all fun.

Except ... well, to some degree, you've got to figure that while "Johnny Rotten" makes for a great stage name to replace John Lydon with, and that he isn't really trying to fool anybody into thinking that's who he really is, well ... in some way, that's EXACTLY who he really is.  Or at least who he has chosen to be; what we choose to say about ourselves has to count for something, even when we are lying AND assuming that the people we are lying to know will know it is "just" a lie.  After all, many lies are nothing more than truth that someone has dressed up for a night on the town.

In this novel, Justin Cowzynski has refashioned himself into "Judas Coyne," and while he is not literally someone who has betrayed the Son of God for money, he's certainly betrayed people in his time.  And, like the original Judas, maybe he even did a lot of it for money.  That way of life might have begun as a stage name/identity, but it has long since become his real persona.  This might or might not be true for guys like Robert "Rob Zombie" Cummings and Brian "Marilyn Manson" Warner; it's definitely true of Justin "Judas Coyne" Cowzynski.

Because of that, Heart-Shaped Box is able to work both as a damned scary ghost story AND as a surprisingly effective meditation upon the difference between staged horror (represented by the type of macabre shenanigans perpetrated by Coyne, and by people like Zombie and Osbourne in the real world) and REAL horror (represented both by the ghost and by the revelations of what is motivating it, but also by the very normal but no less horrific pain and tragedy that occurred in Jude's life as Justin Cowzynski ... and comparable events in the lives of the people who end up attracted to Jude).

What does all of this amount to?  Well, on the level of plain old storytelling, it amounts to a fucking outstanding novel, one with twists and turns and sadness and joy and plenty of gore.  It goes deeper than that, though, because it ends up being a horror novel that is very much a justification for horror as a genre.  Hill accomplishes this by using horror-tinged rock 'n' roll as the focus, and he seems to be answering a question: why would you listen to that crap?  You can, if you so choose, read that in a rephrased format: take your pick between why would you read that crap? and why would you watch that crap?  All of those questions have been asked by people who don't understand the genre for decades; they'll keep on asking it, too, which is why it's always a great thing when someone answers it as resoundingly as Hill answers it here.

In his own earlier life as Joe King, Hill played an important role in his dad's movie Creepshow.  He played the little boy whose father freaks out upon finding him reading horror comics, and demands that he never find him reading "that crap" again.  That little boy had a solution to the problem then, and he's still got one now: all grown-up, he's telling us that people come to "that crap" because it helps them to dull the pain of the things that really hurt in life.

That's the sort of idea that is working beneath the surface of this novel, but if you don't want to read it that deeply, never fear: on the surface is a tremendously entertaining novel, one that anybody who enjoys horror is well-advised to read.

Before I go, I'd just like to point out that Hill has a lot of fun here playing in the world of rock and roll.  Hill's dad was and is a noted rock buff, and actually plays guitar in a band (the Rock Bottom Remainders) on occasion ... as a bit of a gag, but also, one suspects, because he digs the fuck out of doing it.  Hill seems to have picked up a lot from his pops, including a healthy adoration for rock music.  Various sections of Heart-Shaped Box are titled after songs by AC/DC, Led Zeppelin, Nine Inch Nails, and Pearl Jam, and the title of the book is itself a Nirvana homage.  The name "Judas Coyne" can't help but make me think of the band Judas Priest, so there's that ... but also, more gently, the nickname "Jude" brings associations with the Beatles song "Hey Jude," in which Paul McCartney tells us to take a sad song and make it better.  Does this have thematic resonance within the novel?  It does. (Remember to let her into your heart; then you can START to make it better.  Paul McCartney said it, Joe Hill is paraphrasing it via plot and theme, and I believe it.)

Other rock references that caught my attention: the plot becomes a near-literal "Highway to Hell"; and speaking of AC/DC, Heart-Shaped Box also features a charming pair of dogs named Bon and Angus; because it amuses me to do so, I shall now post a photo of those dogs' namesakes, vocalist Bon Scott and guitarist Angus Young: 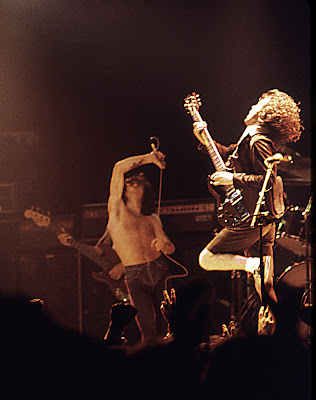 That's about all I've got for now, but to sum up: buy yourself a copy of Heart-Shaped Box, and then read it, and if you regret either, consult a physician for signs that you may have lost your mind.

Final thought: here is an excellent piece of fan art based on the novel.  It was done by Christos Martinis and posted at Deviant Art, and I thought it was worth sharing with you fine folk. 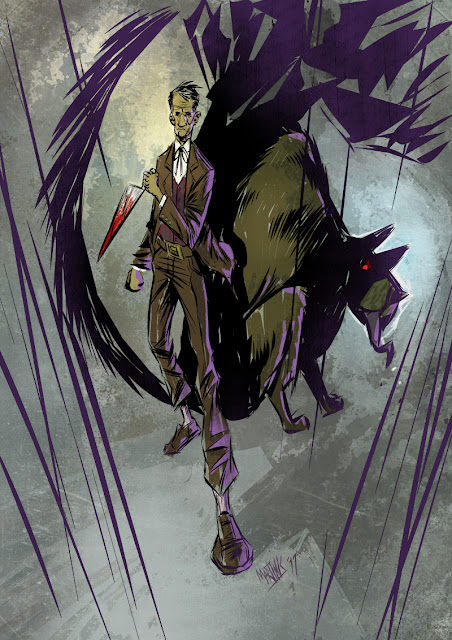 The original post at Deviant Art can be found here; if you like what you see -- and why wouldn't you? -- then check out the artist's blog here.
by Bryant Burnette at 6:20 PM