A Review of the "Carrie: Premiere Cast Recording" Soundtrack CD

The good old United States Postal Service delivered a package to me yesterday.  The contents of that package:
Now, y'all know me.  You know I'm a big Stephen King fan, and odds are you know that I'm a big Bond fan, too.  It ought, therefore, to be fairly easy to figure out which of those items I was more excited about.  (Hint; it was the one I'm not blogging about right this very second.)

Nevertheless, I'm very happy to finally be able to say that I in some way own Carrie: The Musical.  I'm somewhat familiar with it already; a couple of years ago around this time (i.e., Halloween season), I did a bit of digging on the Internet to see if I could find some bootlegs of the original version of the show, and I had some success with that, at least as far as audio goes.  It's pretty low-quality stuff, though; bootlegs are better than nothing, but when something was recorded by a fan with a tape deck in their pocket, the result is typically going to be a bit less than awesome.

In any case, we now have something considerably better in the form of this official CD release.

What I'm going to do is just put the sucker on, listen to each song, and give you some impressions.  At some point down the road, I'd love to be able to do some sort of in-depth analysis of the differences between the various versions of the show, but that sort of write-up is beyond the scope of my interest at the moment.  Someday; just not this one. 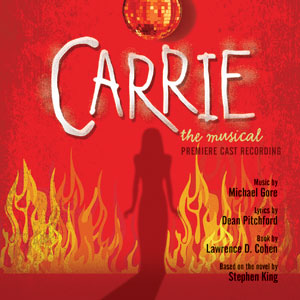 My day has consisted of the following: a two-and-a-half-hour meeting at work, followed by the consumption (on my part) of a substantial quantity of fried fish and shrimp.  The latter was combined with a not-inconsiderable amount of having to fight off the attentions of my cats.  (I tried to feed them the oysters, but, like me, they can't stand the grimy things, so that was a no-go.)

I mention all of that as a means of suggesting that you happen to notice me being a bit more off my game than seems normal, let's chalk it up to an oncoming fried-seafood coma.  Mmmmm ... delicious unconsciousness ...

Hey, check it out: a segue has presented itself!  Because speaking of sleep, the release date for Doctor Sleep has finally been announced: September 24, 2013.

Here's a not-particularly-accurate representation of that concept: 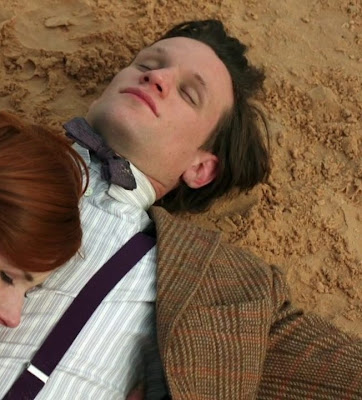 If you got that joke, then I congratulate you on your nerdery.  Know that here, you are among your kind!

After the colossal suck that was last week's batch of comics, I approached this week's batch somewhat trepidatiously.

This week's batch sucks, too. 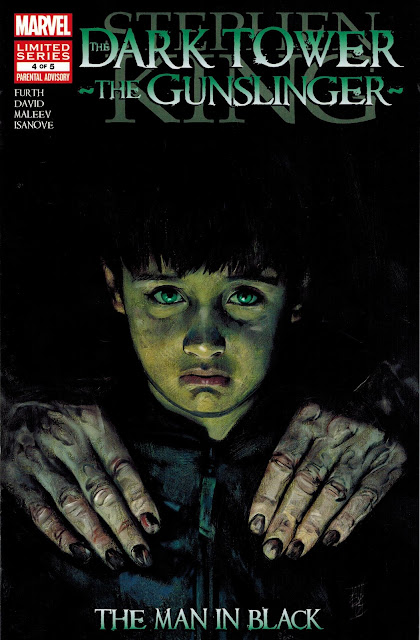 This piece a crap here is leading the way.

So, apparently my titling talent just isn't present today.  No matter; we're going forward with "Collectioning," which is stupid, but is also evocative in a curious way.  Or maybe not.  Either way, we're stuck with it now.

And now, a tasteless motivational poster: 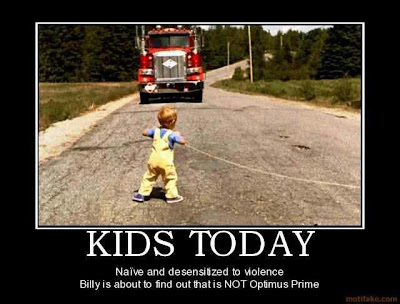 Anyways, to the point: having recently had one of those lovely months that brings three paychecks instead of the standard two, I found myself with some spending money, and I put most of it to use bulking up my Stephen King and James Bond collections, both of which were feeling a bit as though they had lagged behind.  We won't concern ourselves here with the James Bond collectioning, but I wanted to share some of the King-related items I've picked up.  A plot to make you jealous?  Not intentionally; just an excuse to put a blog post out today.

It's comics time again.  And it was a weak week, so we're gonna polish this one off quick and hope for better times some other day. 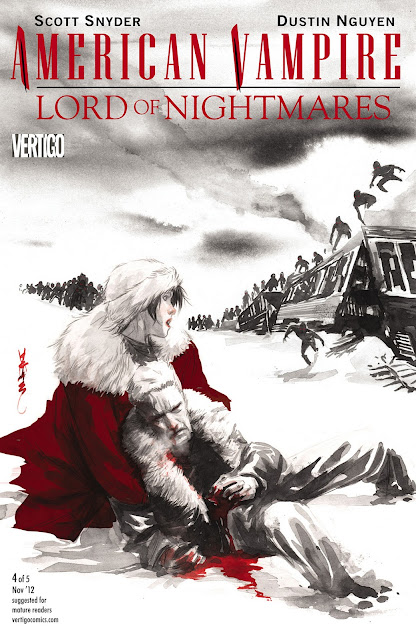 I've had it with these lying-ass comic-book covers.

Hoo-whee!  I've got about an hour to write this column; let's see if it's possible to do it that quickly! 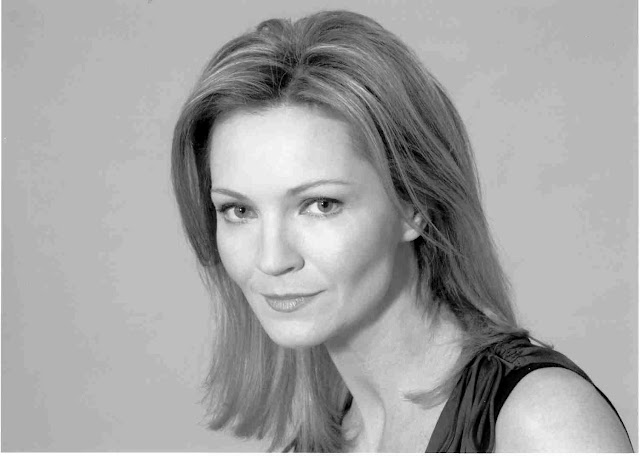 Know who that is?  That's Darcy Anderson.  By which I mean it's Joan Allen, who has been signed to play Darcy in the upcoming film adaptation of A Good Marriage.

A Review of "Bethany's Sin" [by Robert McCammon]

When I read my way through Robert McCammon's books in the late-eighties/early-nineties high-school period during which I was discovering a love for horror fiction, Bethany's Sin was probably my least favorite of the bunch.  It just didn't grab me, for whatever reason.

I was a bit apprehensive, then, about revisiting it; but I was also curious to see how it would stack up against my memory of it, because there have been a few instances in which I've returned to a novel I disliked in high school, only to find in adulthood that it suited me just fine.  Stephen King's Cujo and The Tommyknockers and Gerald's Game are probably the best examples, but you can also put Fahrenheit 451 and To Kill a Mockingbird and A Separate Peace on that list.

Hey, what can I say; sometimes, younger me got things wrong.  Younger me also thought Diamonds Are Forever was a good movie, so what did he know?

In any case, I thought there might be a chance that I would have a better experience with Bethany's Sin these many years later, and hey, whattaya know: I did.

I mention this up front because I realize before having even written it that a great deal of this review is going to end up being negative, and I don't want to give the impression that I didn't enjoy rereading the novel.  I did enjoy rereading it.  In fact, I read the last half of it practically in one sitting, while staying up late as ... well, late as sin doing laundry one night.  I'd hear the dryer stop and think, "Gosh, I'd better go get those shirts out before they wrinkle," and I'd keep going for a page or two more because I simply didn't want to stop reading.  I only vaguely remembered what happened, and I wanted to bring those dim memories into focus.

My shirts didn't wrinkle, but it was touch and go on every load.

So, yeah; I definitely enjoyed reading the book for the first time in a couple of decades.  Let's all be very clear about that, so that when I start talking about the elements that I don't think work too well, nobody will be confused as to the overall feelings I have about the book. 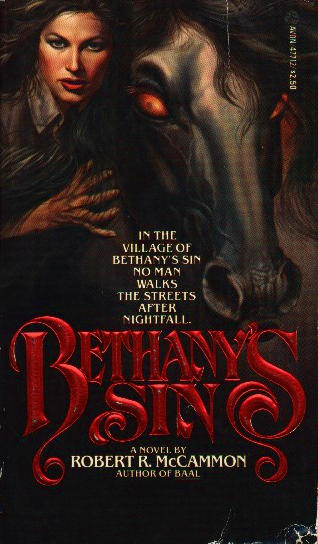 I should mention, I suppose, that there will most definitely be spoilers in this review.  I'll do my best not to go overboard, but I'm not going to make any promises.

I'm kinda tired, and to tell you the truth, I'm finding it difficult to summon up the enthusiasm to write a comics column.  However, I won't have time for it tomorrow, or Sunday, or Monday, and I don't want to put it off until Tuesday because then it'll be almost time to write another one.

So it's kinda now or never.

Pardon me while I take a moment to try and wake up a bit. 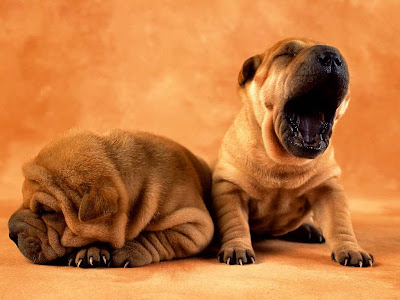 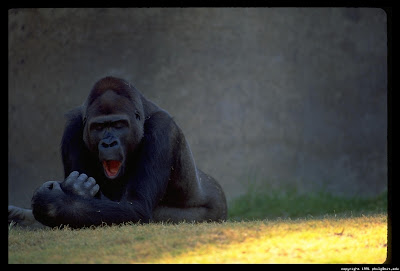 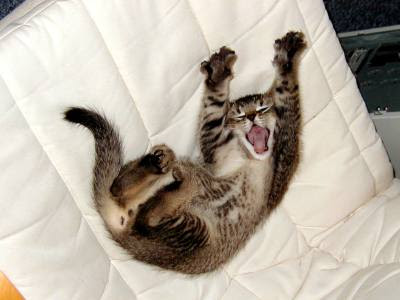 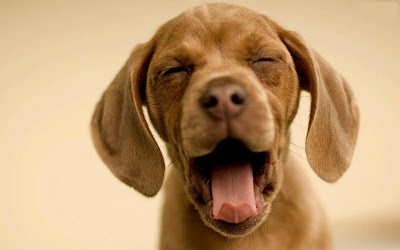 Gosh, you know, that really didn't work as well as I'd hoped.  Oh, well.  There were some pretty good comics this week; maybe those will help me stifle all these yawns.

First up for review: 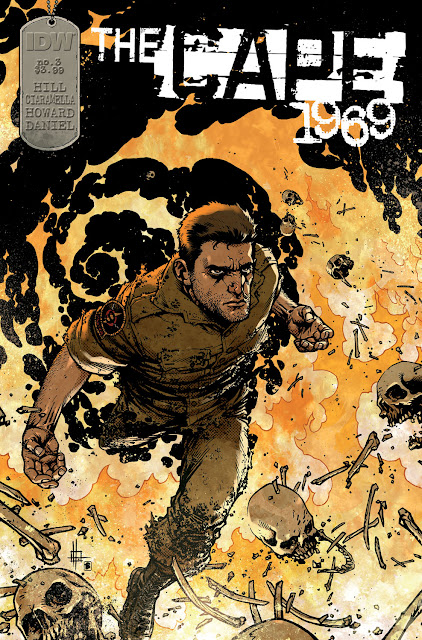 The Green Mile began appearing in bookstores way back in 1996, and like lots of other readers, I snapped each installment up and read it as soon as possible.  It was -- and is -- an utterly entrancing tale, but something about it bothered me in a mild way: it will never, I thought, make a good movie.  My rationale was simple: finding someone to play John Coffey was going to be nearly impossible.  The only actor -- and I use that word in the loosest-possible sense -- I could think of who would be even vaguely qualified for the job would have been Shaquille O'Neal (who had recently starred in a minor hit called Kazaam).  O'Neal couldn't act, though, and surely anybody who played John Coffey would have to be able to act, right?

So a movie version simply seemed unattainable, at least to me.

Ah, but there are people in Hollywood who know way more than I know, and one of the things they knew was that this guy existed: 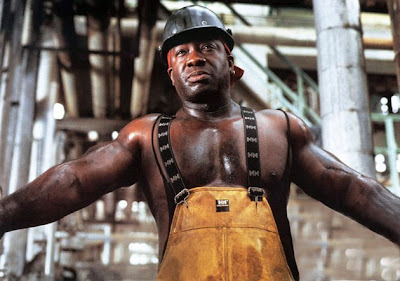 That, of course, is Michael Clarke Duncan, shown here in a moment from Armageddon.  He didn't have a huge part in that movie, but he made enough of an impression on Bruce Willis that the star (who was being considered for the Paul Edgecombe role) recommended him to Frank Darabont.  And the rest is history.

Armageddon was still two years in the future when I was reading The Green Mile for the first time, and while reading the novel, I could have successfully told you that whoever was eventually cast as John Coffey would need to be big, black, and male, and also that he would need to be able to cry on camera, convincingly portray a simpleton, exude an almost Christlike goodness, AND somehow manage to seem like both a giant and a meek little lamb.  It wouldn't hurt if he was unafraid of mice.  He'd need to be able to play at being terrified, too.
Read more »
by Bryant Burnette at 3:52 PM 3 comments: