Movie Review: "Argo" [2012], or: Spammers Are Cordially Invited To Suck A Bag Of Dicks


You may notice that if you choose to leave a comment, you will now be prompted to complete a word-verification field.  Sorry about that; I'm not a fan of those things, and wanted to not use them here, but spammers seem to have discovered my blog, and I'm getting tired of deleting their comments.  So, I'm gonna let the ole word-verification obstacle trip as many of 'em up as possible.

That's not my primary business today, though.

This is my primary business today: 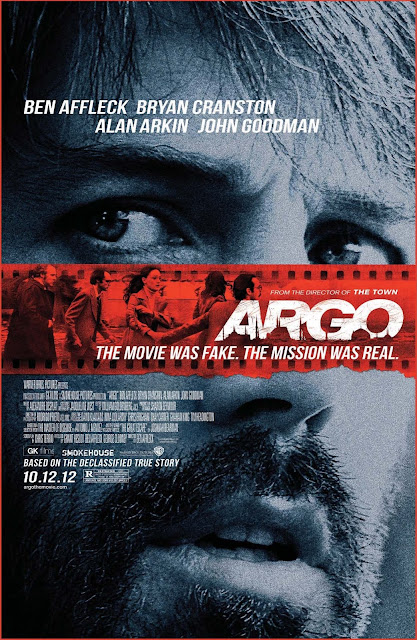 I know what you're thinking: "Bryant, Stephen King has NOTHING to do with Argo, so why are you wasting my time with a review of it?"


Here's why: as you may recall, Ben Affleck has been rumored to be attached to the two-movie adaptation of The Stand Warner Bros. has been developing (with no apparent progress) for over a year now.

And I'm here to tell you that if you have any lingering doubts about Affleck's ability to successfully direct, Argo should put them to rest.  This is a terrific movie.

The setup, based (how closely is unclear) on real events: in late 1979, the U.S. embassy in Iran was invaded by a group protesting America's harboring a Shah who had been overthrown during the recent revolution.  The militants took everyone in the embassy hostage ... except for six Americans who successfully escaped and found shelter with the Canadian ambassador in his residence.  The Iranian militia did not initially know about the escapees, but the State Department knew it was only a matter of time until they figured it out by reassembling shredded documents, and so they began trying to find a way to sneak the six out of the country.

The solution, as engineered by a CIA operative named Tony Mendez (played here by Affleck), is so batshit insane that you have to marvel at it.  He concocted the idea of entering Iran posing as a film producer, who was seeking locations for the filming of Argo, a big sci-fi adventure flick designed to cash in on the then-current mania for Star Wars-style science fiction.  He would then give the six escaped embassy workers fake identities as crew members -- director, screenwriter, associate producer, cameraman, and so forth -- and take them all out on the first available commercial flight.

The result is an incredibly entertaining film.  It's deadly serious, and has all the tension you would want from a great suspense movie (which this certainly is), but is also a hell of a lot of fun.  It's a fact-based suspense film first and foremost, but it's also, by necessity, an Ocean's-style caper movie, and while you wouldn't think those two genres ought to be able to be mashed up as well as they are here, it's a complete success.  Give Affleck the credit; he's turning out to be a hell of a director, and mastering a tricky tone like Argo has cannot have been an easy task.

It helps that he's got a terrific cast.  He plays the lead role himself, which is fine; he does good work playing a character who is mostly taciturn and unemotional, but he is commanding when he needs to be, and scared when he needs to be.  It isn't a showy role, but it's a successful one.

Some of the best work is done by Bryan Cranston (of Breaking Bad), who plays Affleck's CIA boss.  There are very juicy roles for John Goodman and Alan Arkin, both of whom knock the ball clear out of the park.  Goodman plays real-life Hollywood makeup man John Chambers (whose best-known work was crafting the prosthetics in Planet of the Apes, but who also apparently worked with the CIA on numerous occasions); Arkin plays the aforementioned composite producer character.  Plenty of other familiar faces -- ranging from Victor Garber to Kyle Chandler to Clea DuVall to Bob Gunton -- pop up during the course of the movie, too.  And there is a lot of spectacular work done by unfamiliar faces: the many Iranians who fill in the background, and occasionally pop into the foreground.  When a movie like this is well-done -- and this one is VERY well-done -- actors in roles like that tend to not feel as if they are acting, and so they don't get anywhere near as much credit as they deserve.  Here, though, a lot of them are just flat-out terrific.

That, too, is partially the result of great directing on Affleck's part.

So, to sum up: this is a great movie, and you ought to go see it.  And the next time Affleck's name pops up in conjunction with The Stand -- which may or may not ever happen (though I'm definitely in the "hoping for it" camp) -- you can tell people he'll be great for the job.
by Bryant Burnette at 4:27 PM