Burning the Lot: A Review of "Joyland," Part 3

This -- in case you missed the title of the post somehow -- is part three of my Joyland review.  If you're inclined to do so, you can read parts one and two, but be warned: like part three will be, they are chock full of spoilers.  As for the novel, it's a terrific piece of work from Mr. King; I continue to be extremely impressed by the way the current era of his career is unfolding.  He shows no signs of letting up, and Joyland stands proudly beside some of the best novels he's ever written.

I'm less impressed by a recent decision that King made regarding the way Joyland would be published, and that's how I'm going to opt to begin this post.

We'll dive in momentarily, but first, some pulp paperback covers: 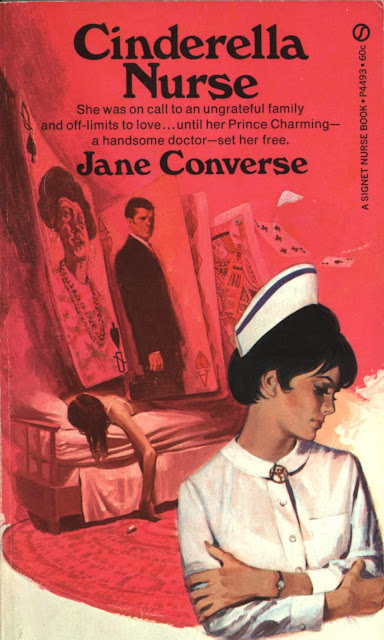 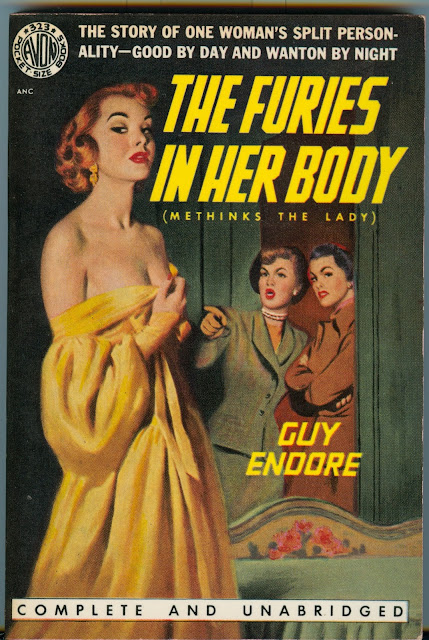 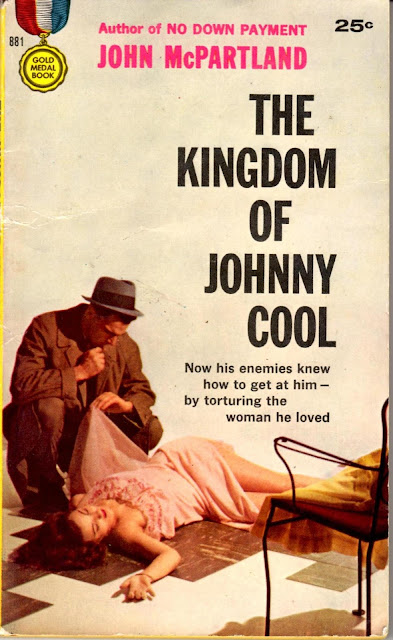 Before we go too much further, let me link to a site that has something to do with topless coeds reading outside.  I don't go looking for these sorts of things; it was one of the results Google returned when I was searching for pulp paperback images.
Did I click on the link?  Yes I did.
Did I bookmark the site for later perusal?  Yes I did.
Do I apologize for those things?  No I do not.  If you think you would feel differently, you should definitely not visit that site.  Me, I'm gonna go back later and find out what these shirtless book-loving ladies are all about, and ponder the tragedy of my misspent youth.  I'll probably sigh a lot.  Might be time to bust out my Smiths greatest hits CD again, too...
It's a weird world we're living in, y'all. 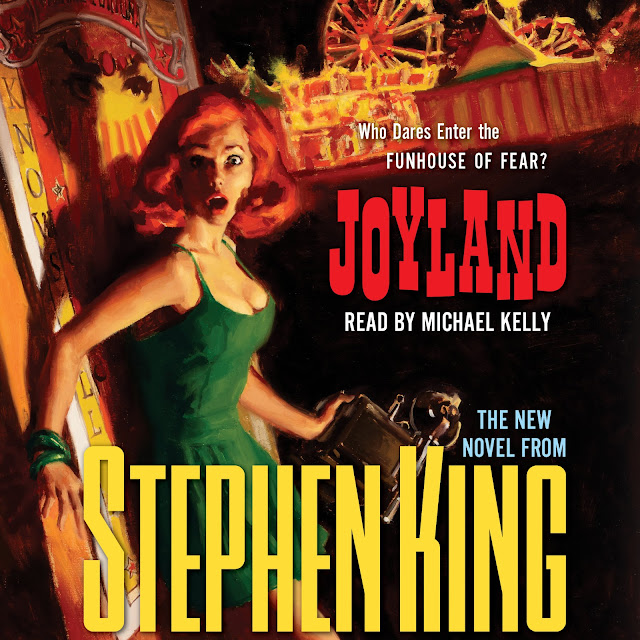 You will never, ever, ever hear me apologize for loving this cover.  Not going to happen.

But I'm more than willing to admit some ambivalence about my love for it, not because I'm not sure that my own feelings about it are more or less beyond reproach, but because I cannot immediately be certain expressing love for the art isn't acting to further a societal problem.  Here is an image -- one not represented by an actual scene in the book, by the way -- of a scantily-clad woman seemingly being menaced.  Menaced by whom?  By someone we can't see.  In fact, whoever it is menacing this cute, pert redhead would almost have to be standing roughly where we ourselves are standing when looking at the cover; so in a sense, we are the person this woman is surprised by and/or scared of.

Is that a negative thing in any way?

I don't know.  I think I think that it probably isn't, but I haven't really put much thought into it.  I suspect that there are people who probably feel it's a bit misogynist, though; and I can't really say that my gut tells me they've wrong about that. 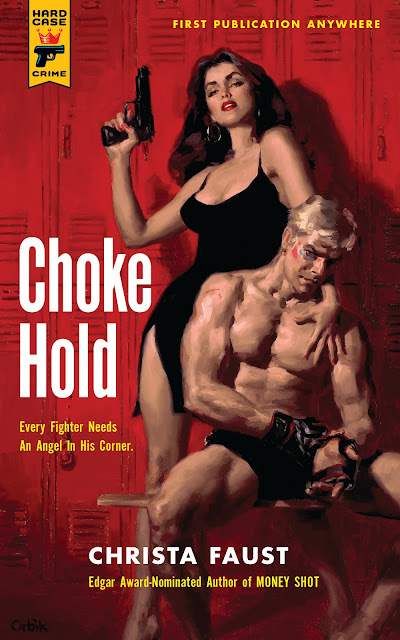 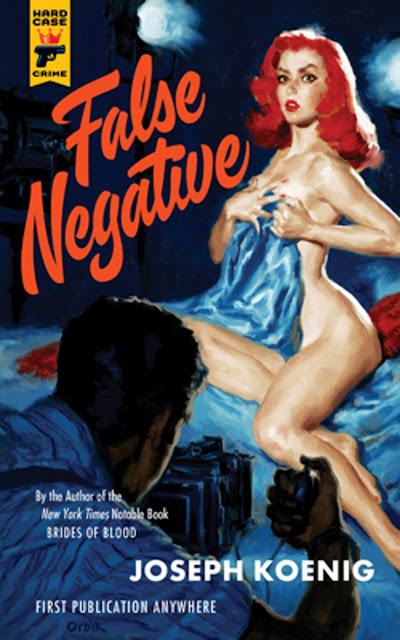 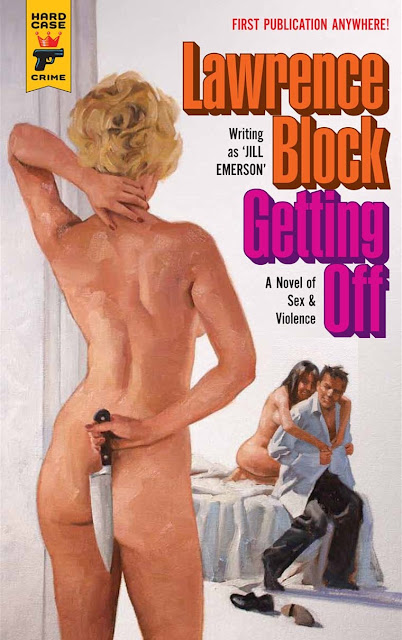 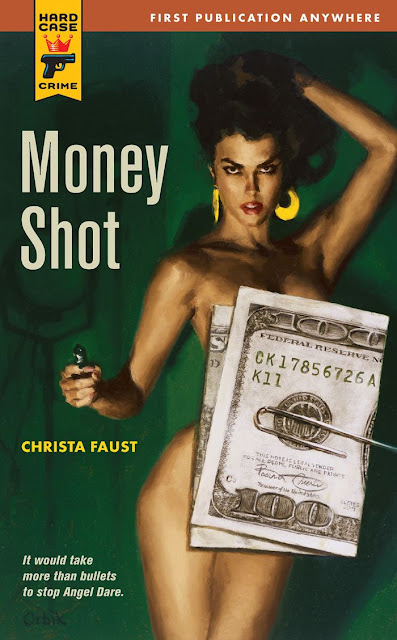 I don't know that I'd use the word "misogynistic" to describe those, but the word "salacious" certainly applies.  So would "exploitative."  I'm not bothered by them.  But I'm not a woman; I don't know what it's like to be a woman, and won't pretend to.  By virtue of having a female friend who utterly adores images of Betty Page and Marilyn Monroe, I know that it's certainly possible to be a woman and enjoy cheesecake images for what they are: celebrations of the female mystique.  But there are also lots of women who find that sort of thing insulting, limiting, and creepy.

All I can vouch for personally is my own feelings, and seeing images like that does not -- as far as I know -- make me more likely to oppress women in any way.  So I feel like I'm off the hook.
Not everyone is me.  And the question I have to ask is this: is Hard Case Crime doing the right thing by creating these throwback-to-a-different-era pieces of art?  By asking that question, I am not passively suggesting that the answer is "no."  I genuinely don't know.  I don't feel as if men ought to have to apologize for thinking hot women are hot; similarly, I don't feel as if women ought to have to apologize -- not that anyone is asking them to -- for thinking hot men are hot.  Change those gender pronouns around any way you see fit, too; the same rule applies.  I kinda feel like we all ought to be perfectly fine with thinking that looking at a nude or semi-nude body appreciatively is a valid way to enjoy our time on planet Earth.  No need to have to worry that we're all perverts, or that we're going to Hell for it; that's just silly.

What I don't know is whether couching that pursuit in a context of Return To Yesteryear is the right way to go.  Because let's face it: yesteryear sucked for a lot of people.  Not so much for white men, but for everyone else?  Not automatically a walk in the park.  And part of me wonders if creating a line of paperbacks that purposely evokes a semi-misognynistic trope of days gone by isn't the wrong thing to do.

I don't have an answer.  I'm honestly not even hinting at one; I'm merely serving up some food for thought.  If anything, looking at those covers kinda makes me want to start a complete collection of Hard Case Crime books, because I genuinely love the art, both pruriently and aesthetically.  But I think it's a valid question to ask.

Wrapped up in all of this is another question that I think is valid: did Stephen King do the right thing by deciding not to allow an e-book version of Joyland to be published?

On this subject, my mind is more made-up: I think there should have been.

In terms of my own reading habits, I'm a physical-book consumer.  I've got nothing against reading digitally; I own an iPad, and I've got the Kindle app for my laptop.  I'll read something digitally if that's the only way I can get it, but I prefer to read an actual book.

Again, not everyone is me.  There are plenty of readers who prefer to read digitally, and in 2013 (...the future!...), they have every right to expect to be given the option to do so with a new release.

King's stated goal in releasing Joyland minus digital is as follows (from the press release):

I love crime, I love mysteries, and I love ghosts. That combo made Hard Case Crime the perfect venue for this book, which is one of my favorites. I also loved the paperbacks I grew up with as a kid, and for that reason, we’re going to hold off on e-publishing this one for the time being. Joyland will be coming out in paperback, and folks who want to read it will have to buy the actual book


King would later comment further that he wanted to do something to help bookstores, by virtue of sending some foot-traffic their way.  That's a very cool thing to do, at least in theory, but in the end, it's a futile gesture: Joyland is only going to sell X-number of copies.  In the macro sense of things, even if every single person who buys the novel buys a copy from a brick-and-mortar bookstore, it won't have a significant impact on the bottom lines of stores.  Book stores are dying because the industry is changing; this is cultural evolution at work, and there is no stopping it, no slowing it.  King's action is the action of a nice-hearted man, one who loves books and the places that sell them, but let's face it: this is tantamount to putting a Band-Aid on the wounds of someone who's just had his legs cut off and is in the process of bleeding out.

A few other points deserve to be made about all of this:

In other words, "here's what we're doing, except that we're not doing that 100%."  It's a compromised gesture, and that makes it a hollow gesture.  If you aren't going to commit fully, why bother?  The end result was a fair amount of bad press for King from people who saw his decision as determinedly Luddite.

Now, about that.  I want to be clear: I'm not piling on.  I support Stephen King's right to do whatever he bloody well feels like doing.  And I'd say the odds are good that he had some sort of reason for doing this that I haven't taken into account.  MY only gripe with his decision is that he didn't commit to it as fully as maybe he could have done.  However, there have been people that have griped about how he's trying to harm the e-book industry with this decision.

Those people are morons.  King is one of the most famous pioneers of the e-book industry.  Do the people railing against his decision not remember The Plant?  "Riding the Bullet"?  "Ur"?  "Mile 81"?  Are they unaware that a Rock Bottom Remainders anthology called Hard Listening (which contains new fiction and nonfiction by King) will be available only digitally?  King has done quite a lot to shape and legitimize the e-book industry; to the people criticizing him on the grounds that withholding one measly little novel from being published in that format is tantamount to declaring war, I would say that their objection is so stupid a criticism that it goes right past stupidity and into ignorance.

That said, I sympathize with people wanting to read the novel digitally and not being able to, because it seems like their preferences are being purposely spurned in favor of...what, exactly?  King is obviously within his rights to go that route, but is it really worth making his readers who prefer digital feel slighted?  For King, the answer to that question must have been some form of a "yes," but it seems like a bit of a misstep to me.
There's been some controversy over the manner in which Joyland was published, but what matters is the work itself.  And my advice to you is that you read it.  Buy a paperback, buy the audiobook, download it on Audible, get it from the library; do whatever you feel like you need to do.  Just get it and read it, because it's a terrific novel.

Now that my mostly incoherent rant has ended, let's move into the review portion of this supposed review.

I don't have a particular focus this time out; I just had a few remaining points I wanted to make that couldn't be easily worked into the first two reviews.  So, it's a roundup.  Yeeeeeeeeee-HAWWWWWW!!!!!  I apologize in advance for how scattershot the remainder of the post is likely to be, but pard, it cain't be helped. 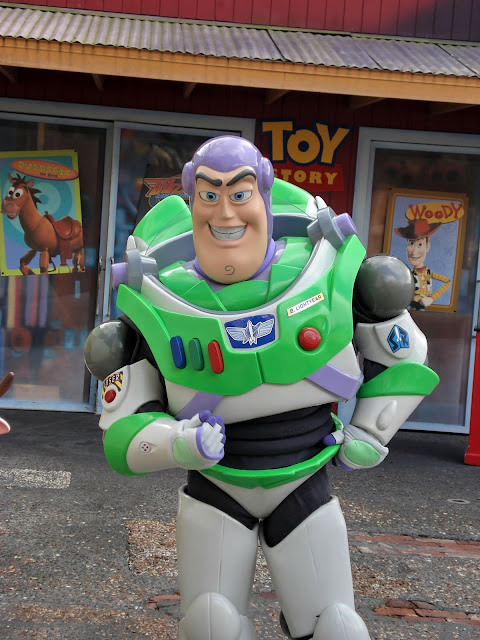 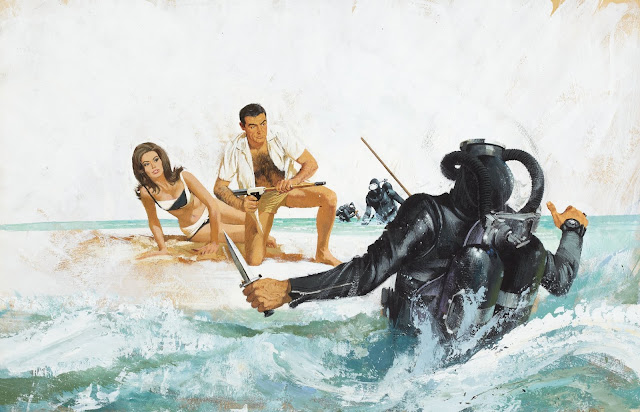 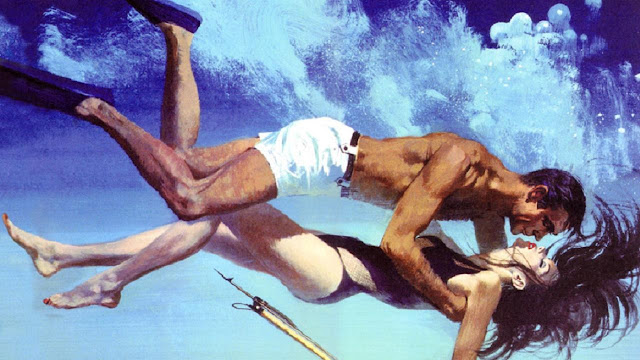 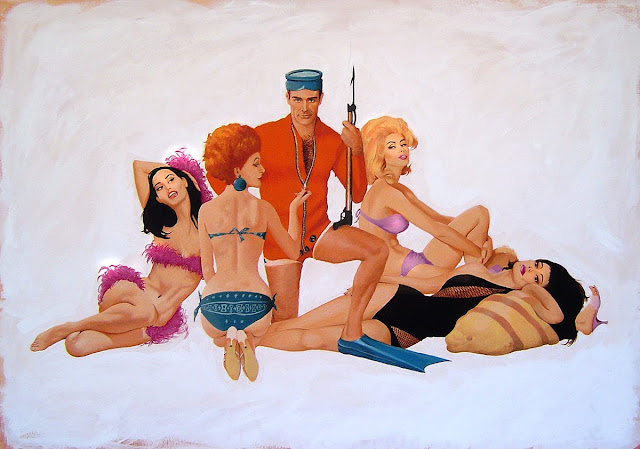 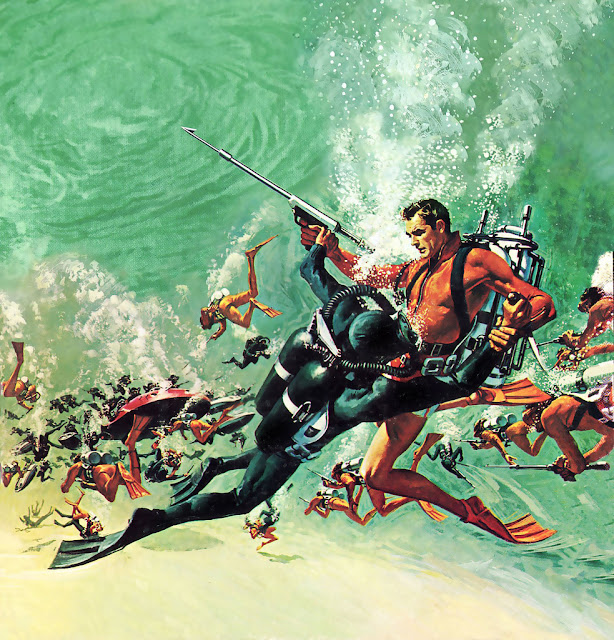 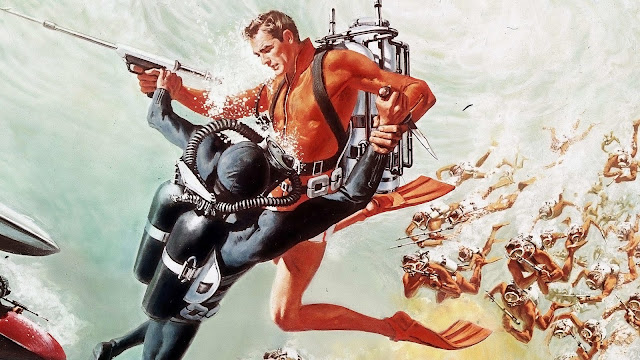 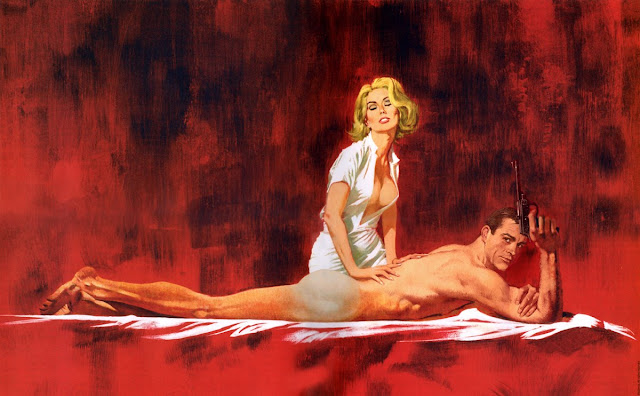 And with that, we have reached the end of this lengthy rant/screed/review.  Apologies for the sloppy arrangement of the content this time out; your refunds for this month's subscriptions are in the mail.  Probably in the mailbox right now, actually.  Have you checked?

There might or might not be a part four to the review at some point.  Once I get my copy of the limited-edition hardback, I might review it, if I feel there is enough to say to warrant it.

One way or another I'm gonna getcha getcha getcha getcha I'll be back soon with a review of the recent CD release of a CD version of Ghost Brothers of Darkland County, King's collaboration with John Mellencamp, T-Bone Burnett, and others.  Count the "of"s in that sentence?  Four of 'em!  Sloppy, sloppy, sloppy; that can only mean it's time for me to go get some sleep.