Ron Howard appeared on this week's episode of The Empire Film Podcast to promote his new film, Rush (which is getting brilliant reviews and seems destined to figure into the Oscar race next spring).

Among other topics, Howard spoke a bit about the status of The Dark Tower.  I put my transcription skills to use, and here you have the results:

Howard:  The Dark Tower is something that we're still working on, and we've all sort of taken an agreed vow of silence about the progress, the headway, what we think our timetable is.  I don't think I realized how much media interest there was in the title and how much excitement there was.  It's a fascinating, powerful possibility, and even Stephen King acknowledges it's a tricky adaptation.
To be honest, from a financing side, it's not a straightforward, four-quadrant, sunny superhero story: it's dark; it's horror.  That edge is what appeals to me, and the complexity of those characters is what appeals to all of us.  I think Stephen King really respects that Akiva Goldsman and myself...that that's what we love about it, and that's what we want to try and get to the screen.  So the answer is, it got delayed in our minds; it's never gone away.  We're working on it, and he's very patient with us.
Akiva's just gone off and directed a movie, and I'm continuing to work, but the Dark Tower dreams -- the fever dreams -- are still with us.  But we're not going to give it a timetable, because it was always a little bit over-reported in terms of when we thought the start date was, and then it was hugely disappointing when we didn't meet that date, and so forth.  I don't think it's a project that really benefits from being scrutinized in that way.

Empire:  I'm sure your vow of silence will cover it, but...Stephen King himself appears in The Dark Tower.  Have you thought about how you might tackle that? 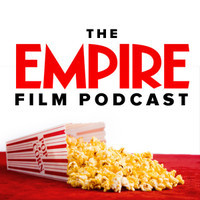 The Empire Film Podcast is a weekly show that is well worth a weekly listen.  You can find this week's episode here, and if you'd like to listen to the full Ron Howard interview, it begins at about the 46:00 mark and runs for about fifteen minutes.  In  addition to Rush and The Dark Tower, Howard has some great things to say about his role on the recent season of Arrested Development.

I'm a Ron Howard fan in general, and every time I hear something from him about The Dark Tower, he further convinces me that he's got what it takes to do a great job.  As for Rush, it sounds like it's pretty great; I look forward to seeing it in a couple of weeks, and if The Dark Tower had to get delayed, I'm glad the delay seems to have resulted in at least one excellent movie from Howard in the interim.
by Bryant Burnette at 7:29 PM