This is obviously going to have nothing to do with Stephen King.  Let's all agree to just be okay with that.

But, just because I feel like doing it (and because a brand-new Disney animation just opened in theatres), here is a Worst to Best list of the 53 animated feature films produced by the Walt Disney Studios feature animation division(s).

We begin with a series of Honorable Mentions, for movies that are not, technically-speaking, counted as Disney Feature Animation releases, but include segments animated by the Studios.

But before that, we actually begin with a Dishonorable Mention: 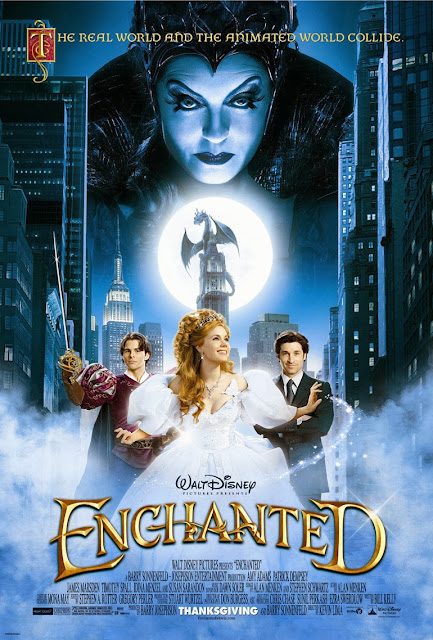 
Obviously, Enchanted is courting nostalgia for classic Disney animated fairy tales, and to prove it, there is about 13 minutes of animation.

None of which were animated by Disney Feature Animation, on account of how the entire department had been disbanded by Michael Eisner before he was forced out of the company.

The conceit behind this week's episode is that somebody's Trouble causes the Troubles to go away.  Or, more precisely, to have never existed.  The result is that the town becomes a sort of alternative-universe version of the series, wherein Nathan is a family man and a doctor, Duke is the sheriff, and so forth.

Sci-fi/fantasy shows love to pull a trope like this out on occasion, and there's a good reason for it: it's fun.  It gives the actors something interesting to do, and typically results in hilarity of some sort.

I don't know that I feel like Haven did a heck of a lot with the concept, sadly.  It isn't a bad episode, though; it isn't one of the better of the season, but it has its moments.

The logical assumption -- and the one Audrey (who, you will possibly recall, is unaffected by the Troubles) -- is that this weirdo It's a Wonderful Life-type scenario is being caused by William, but that turns out to not be the case.

Massive spoilers lie ahead, so proceed at your own risk.
Read more »
by Bryant Burnette at 5:52 PM No comments:

It's been several weeks -- nearly a month, in fact -- since I last wrote about comics.  The reason for the delay is simply that there hadn't been much of anything come out during that time that was worthy of serving as the lead-off batter.  There are no Stephen King comics being published right now, and I do like for this column to have at least some King-centricity.

This past Wednesday brought us a new Joe Hill comic, however, so finally, something to jump-start a Bryant Has Issues has arrived.


The Joe Hill comic in question is the first issue of Wraith (or Wraith: Welcome to Christmasland, which it is also being called in some places, although I'm going to stick to the shorter name, since that's what the cover says).  It is a companion piece to Hill's novel NOS4A2 that tells us more about that book's villain, Charlie Manx (and his villainous abode, Christmasland).

There will, of course, be mucho spoilers in this teeny-tiny review -- "teeny-tiny" because I've got to go to work in a little while, and I really want to go pick up some buffalo wings on the way.  In the "buffalo wings vs. Haven" competition, Haven will lose virtually every time.  So will most shows, though, and let's not let this impending repast of mine seem like a referendum on the series.  It isn't.

In fact, I continue to be impressed by just how much better the series has gotten this season.  This week, the cliffhanger from "Crush" gets resolved immediately, as we see that Audrey has failed to get out of the cockadoodie car fired her weapon not at Nathan, but at the huge man from the Barn.  Did I expect Audrey to shoot Nathan?  No, not really; so this sort of thing doesn't bother me.  There was -- for me, at least -- never much suspense in whether or not Nathan would be killed; the suspense lay in the means by which it would be averted.  And for me, this works relatively well.

And let's face it, if you had a gun and found Robert Maillet in your apartment, wouldn't you shoot him, too? 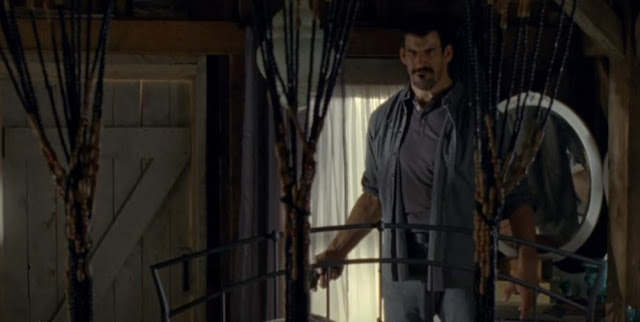 Dude looks like he means business; I'd plug him, and right quick.

Audrey misses, though, so he scampers away on whatever creepy business he is conducting.  Soon enough, we find out that his squirrelly associate has kidnapped Dwight.  The two of them are looking for a box of some sort.  Our heroes free Dwight, but find that Sinister Man and Heavy -- this is how the characters are billed on IMDb, and who am I to disrespect IMDb? -- have another prisoner: William, the guy who helped Lexie escape the Barn.
Read more »
by Bryant Burnette at 3:46 PM 4 comments:

A Review of "Small World" (by Tabitha King)

By now, it is fairly common knowledge that Stephen is not the only member of the King family who has an aptitude for writing fiction.  His oldest son, Joe King, has become a bestselling author in his own right (under the name Joe Hill); Joe's younger brother, Owen, published his first novel in 2013, and received strong reviews for it.  And if we open things up to in-laws, we can also add Owen's wife, Kelly Braffet, to the list; she, too, published a well-reviewed novel this year.

Receiving a bit less attention of late is Tabitha King, mother of Joe and Owen, wife of Stephen.  Since 1981, she has published eight novels, beginning with the novel I'm reviewing today, Small World.

I'd been aware of Small World for years, and had always been curious about it.  If I'd been able to locate a copy, I'd've read it in high school, during the dawn of my Stephen King fandom; but none of the stores I shopped in ever had a copy, nor a copy of any of King's other books.  (Tabitha's, that is; henceforward, when I mention "King" in this review, know that it is she to whom I am referring.)

I had no specific knowledge of those other books, but Small World, I knew a bit about: it was the tale of a tiny woman living out a life in the normal world, somewhat in the style of a reverse Gulliver.  It was an intriguing premise, and I remembered it for years.

And so now, finally, I've gotten around to reading it.  This gives me at least some vague hope that I might , someday soon, do one of the many other things I've been failing to do for decades now: visit a foreign country; discover that I am the inheritor of a vast fortune; "save money" (whatever THAT means); spontaneously develop a craving for vegetables; read a novel by Isaac Asimov; et cetera.  Some of those are achievable goals; others are likely to remain tantalizingly out of reach.
In any case, "read a novel by Tabitha King" can now be removed from the list, and it may not be much as far as achievements go, but hey, I'll take it.
So, the question: was it worth the doing?
Read more »
by Bryant Burnette at 10:33 PM 6 comments:

The title of the episode is "Crush" because a Trouble is making things implode due to deep-sea-diving-style pressure changes.  Get it?  It's CRUSHING things.  Get it?

I'm being snarky because once upon a time, that was something of a fallback position for me when writing about Haven.  The truth is, though, "Crush" is another solid episode in a season of solid episodes.  So get outta here, Snarkosaurus Rex!  You're drunk; go home!  (Alternatives for that piss-poor attempt at wit included a reference to a snarktopus and a snark-rador retriever.  Ehh...at Casa Bryant, things have taken a turn for the lamer.) 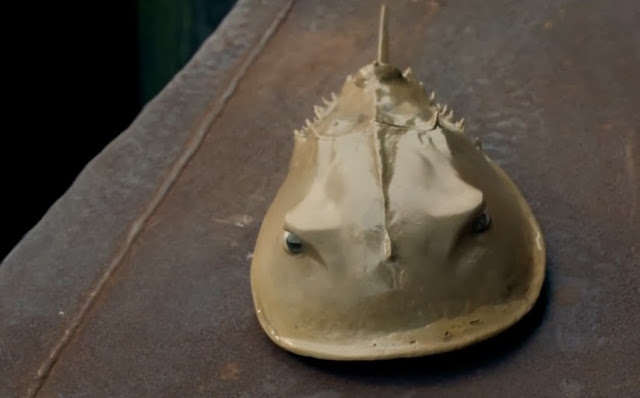 Oh Dear God, I Think So Too: A Review of "Strawberry Spring"

Stephen King published nine short stories while in college, and when the time came in the late '70s to compile his first story collection, Night Shift, only two of those made the cut: of those two, "Strawberry Spring" is the earliest to see publication.

One way to interpret this would be to say that as his stardom began to truly sink in, King viewed "Strawberry Spring" as being perhaps the earliest example of his fiction really working, and being able to exemplify what his short-fiction work was all about for a readership that had quickly become very large indeed.

I think a case can be made for both "Cain Rose Up" and "Here There Be Tygers," which had appeared in the Spring 1968 issue of Ubris, but if someone were to argue that "Strawberry Spring" was the moment in which -- in terms of talent, if not readership -- Stephen King was born, I don't think I'd put up much of an argument.

"Strawberry Spring" was, like "Cain Rose Up" and "Here There Be Tygers," published in King's college literary magazine, Ubris.  It appeared in the Fall 1968 issue, a semester later than the previous two stories, and the jump in King's skill between the Spring and Fall publications is significant.  (I say this based on the story as it appears in Night Shift, of course; any revisions King made for its collection in that book will not be accounted for in this review.)  Not as significant as the jump had been between "The Glass Floor" and "Cain" and "Tygers," but significant nevertheless, and reading the four stories in sequence, one cannot help but be struck by the extent to which King seems to have grown in the year spanning the four stories.  It is somewhat dizzying to contemplate, and I would indeed argue that the end of that year found King in possession of the raw talents he would develop over the next few decades.

Which is to say, I guess, that "Strawberry Spring" is an important story.
Read more »
by Bryant Burnette at 12:19 AM 5 comments: