"That dog won't bark," says David Morse frustratedly during a crucial scene during The Langoliers; his character, Brian, can't get any response on a radio frequency that, under normal circumstances, would be jumping with traffic ("like frogs on a hot sidewalk," he says).  It's a nice turn of phrase -- no surprise, that: it comes straight from the novel -- and it's one that could be used in more or less any circumstance to indicate that something is unwilling or unable to fulfill its primary objective.

In the specific case of Brian's ominously silent radio frequencies, the dog's unwillingness or inability to bark is surprising, unlikely, and extremely mysterious.  I'd argue that the movie itself is a dog that won't bark, too; in searching for a reason why that is, I'm tempted to simply channel my inner Roger Ebert and say it's because it's too busy gobbling like a turkey, since a turkey is what it assuredly is.  In that version of this review, I go ahead and end the blog post right there, feeling that all that needs saying has been said.  It's the blogger equivalent of throwing the microphone down after the punchline and walking off the stage.

But dadgummit, I spent several hours last night harvesting screencaps for this post, and if I don't use them, I'll feel like not only was that time wasted, but that it was hella wasted.  Can't have it.  Won't have it.  Gotta use 'em, and if I gotta use 'em, there may as well be more of this priceless text accompanying them. 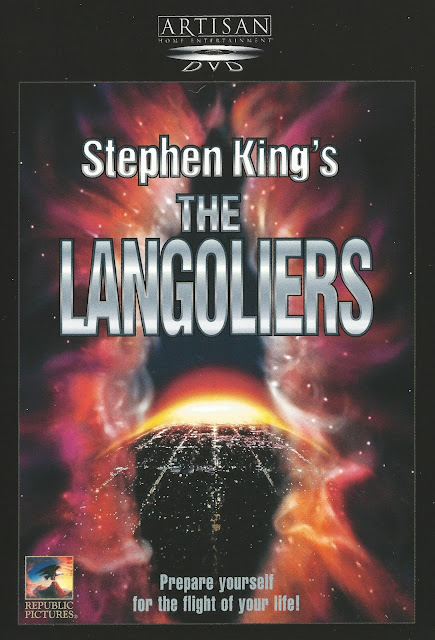 When last I ranked all of the King movies, The Langoliers came in at #59.  That's pretty damn low, and part of me thinks it might be too low.  Is this movie really worse than Bag of Bones?  Or Children of the Corn IV?  Or the first season of Haven?  I could go either way on it, to be honest.  Lists like that one are 75% hokum at best; only a fool pretends otherwise.

Regardless of the specific placement, though, I stand by my assertion that it is a pretty damn bad piece of work.  And yet, I know it has fans.  Some of them may be reading these very words . . . right now.  Sometimes, it makes me feel a little bad to rip something apart in a review, because I know there will be people who theoretically might have their feelings hurt by it.  I'm not fool enough to think that the director of the movie is going to read this, or anyone associated with the project . . . but stranger things have happened, oh yes indeedy they have.

With professionals, though, I tend to assume and hope that they have developed enough of a thick skin to simply look at a bad review -- which is what this one is assuredly going to be -- and just sort of shrug at it and say, "Ahhhhh, fuck that guy.  He's just a schmuck on the Internet, anyways."  Which is true.  So I don't much worry about that.

There Is Always a Tail to the Tale: A Review of "Four Past Midnight"

As I've stated before several times in the course of my blogging (apologies to those to whom I may sound like a semi-broken record), I'm slowly re-reading my way through all of King's books.  Some of them are books I'm very familiar with, but others are books I've only ever read a time or two.

One of those is Four Past Midnight, which I read once or maybe twice in 1990, and then again via audiobook toward the end of that decade.  And thanks to the movie versions of the first two stories in the book (The Langoliers and Secret Window, Secret Garden) I remembered half of the book relatively well.  The remaining two stories, however, were near-complete blanks to me.  I remembered one element of The Library Policeman; I remembered almost nothing of The Sun Dog.

Not really, of course . . . but as far as rationalizations go, that one isn't too shabby.

In any case, the only important question is this one: did I enjoy the return visit?  And the answer is "yes."

It's a qualified "yes," however.  Let's get into the specifics of why that is. 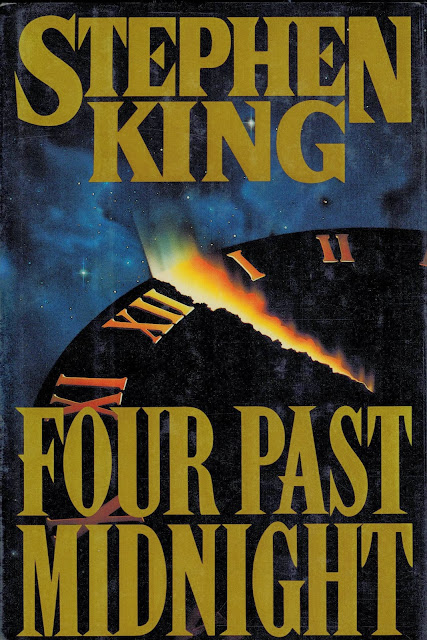 Four Past Midnight begins with a six-page essay titled "Straight Up Midnight: An Introductory Note."  I tend to assume that a great many readers skip right past introductions to the meat of the story, and while I understand the impulse, I also put on my squinty-eyed disapproval face at the thought of readers skipping King's introductions.  So much of his personality shines through in those occasional pieces that they are, for me, nearly as essential a part of the text as the fiction itself.
Read more »
by Bryant Burnette at 12:11 AM 10 comments: