A Few Words About "True Detective"

No time for a full-on post here, but I feel an obligation to mention something about the new HBO series True Detective, which is two episodes into its eight-episode first season.  The series was created by novelist Nic Pizzolatto, who wrote all eight episodes.  It is the story of two Louisiana State Police detectives who are attempting to solve a bizarre, occult-like murder in 1995.  They are played by Matthew McConaughey and Woody Harrelson, who each are doing work as good as any work they have done in their careers to date.

But that's not what makes the series of particular interest to Stephen King fans.  Nope, that would be the fact that all eight episodes were directed by Cary Joji Fukunaga.  You might not be familiar with that name.  Then again, you might recall that Fukunaga is allegedly going to be directing (and co-writing) two movies based on the novel It.

Prior to seeing these episodes of True Detective, I had not seen any of Fukunaga's other films.  I remembered that both Sin Nombre and Jane Eyre got very strong reviews; but I never actually saw either.  So while his hiring for a potential two-film version of It sounded like a good idea, it was the sort of thing that appealed to me primarily in a theoretical sense.

Having now seen Fukunaga in action, I can say this: the idea of a two-movie version of It being done in the style of these two episodes of True Detective is appealing to me in a massive way.  Fukunaga is, based on what I'm seeing, fairly masterful: with his actors, with his tone, with his camera setups, with his cinematography.  Some of this is undoubtedly also Pizzolatto, but Fukunaga is clearly the real frickin' deal, boys and girls.

Here is one of the striking images from the second episode: 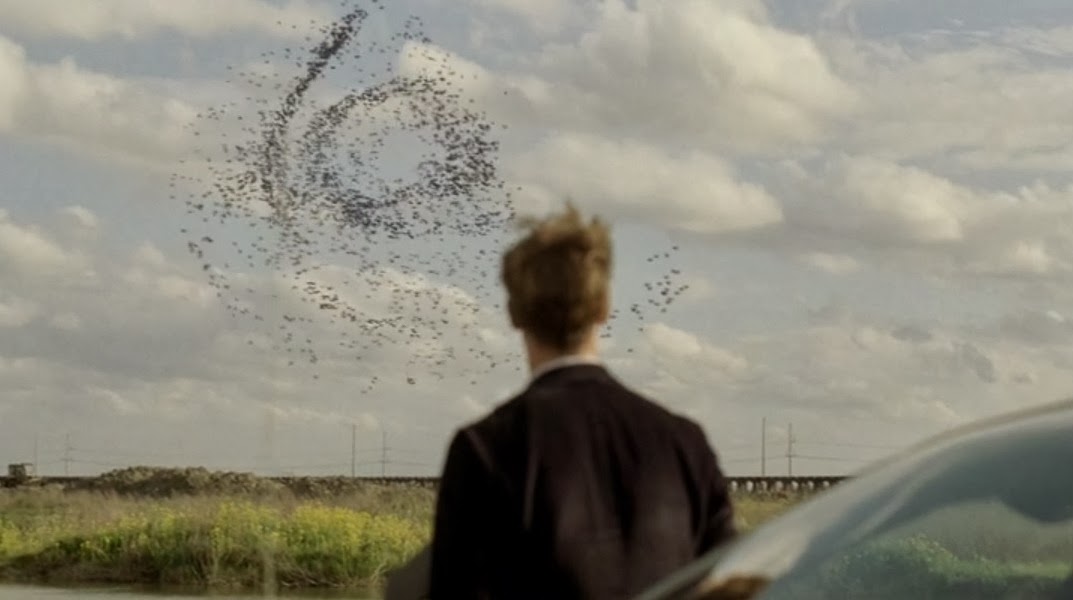 It's arguably an intriguing image in its own right, but if you know the significance of the shape that flock of birds seems to be forming -- and know, also, the reason why it might be forming -- then things become much more compelling real quick.
Read more »
by Bryant Burnette at 11:47 PM 10 comments:

Dadgummit, I'd been plugging along real good with my weekly Haven reviews, and then busy-time hit at work, and wham-blammo, I was unable to produce for the final three episodes of the season.  I considered just ignoring it, but I'm currently in playing-catch-up mode, so I figured, what the hey, let's at least get a brief set of reviews out into the world.  Just for a sense of completion, you know?

So, here it comes.  Spoilers ahoy! 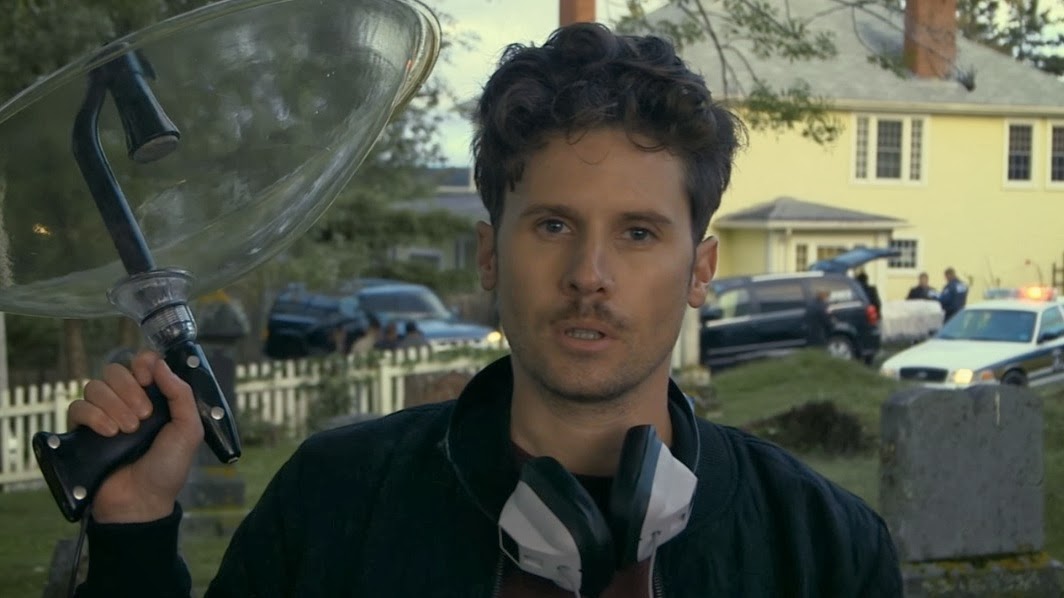 In episode 11, "Shot in the Dark," Danny Masterson (whom you might remember from That '70s Show) plays a guy who hosts a web series about paranormal pursuits.  Along with his partner, the team is known as the Darkside Seekers.  Lame, yes; but is it any lamer than some of the extant groups in the real world who do this sort of stuff.  Nope.  Therefore, it's kind of cool.

Released by Cemetery Dance Publications right at the end of 2013 (my copy arrived in the mail on December 23), Turn Down the Lights is a short anthology, but a good one.  At a mere 174 pages, it is arguably a wee bit overpriced ($35 is pushing it); but given the quality of the stories, I don't feel as though I overpaid.

One of the joys of reading a good anthology of new stories is that you typically don't have a clue what most of the stories are about.  In my case, I knew nothing about any of them; not even "Summer Thunder," the Stephen King short story that prompted me to buy the book.  So when I began reading each story, I did so fresh, with no preconceptions (except as they related to my relationship, or lack thereof, with the authors' previous works).  It's a good way to read a story.  It's also a good way to see a movie, or an episode of a television show, or to read a comic book, or to hear a song.  But we don't typically experience art in that way; so when it happens, I tend to treasure it, especially if the experience turns out to be a positive one.

Which leaves me in a bit of a quandary as far as writing a review goes.  What do I tell you about each story?  Do I give you brief synopses to try to sway you one way or the other?  Or do I try and preserve your ability to experience the stories as free of knowledge as I experienced them?  My inclination is to do the latter, but that'd going to make for an awfully short review; in fact, it would sort of defeat the purpose of a review.

So if what you want is to have the same experience I had, I'll say this: just skip this review and buy a copy of the book.  It won't hurt my feelings, I promise.

For those of you who want a little more info, though, I'll give you my brief impressions of each story.  I'll steer as far away from plot specifics as I can. 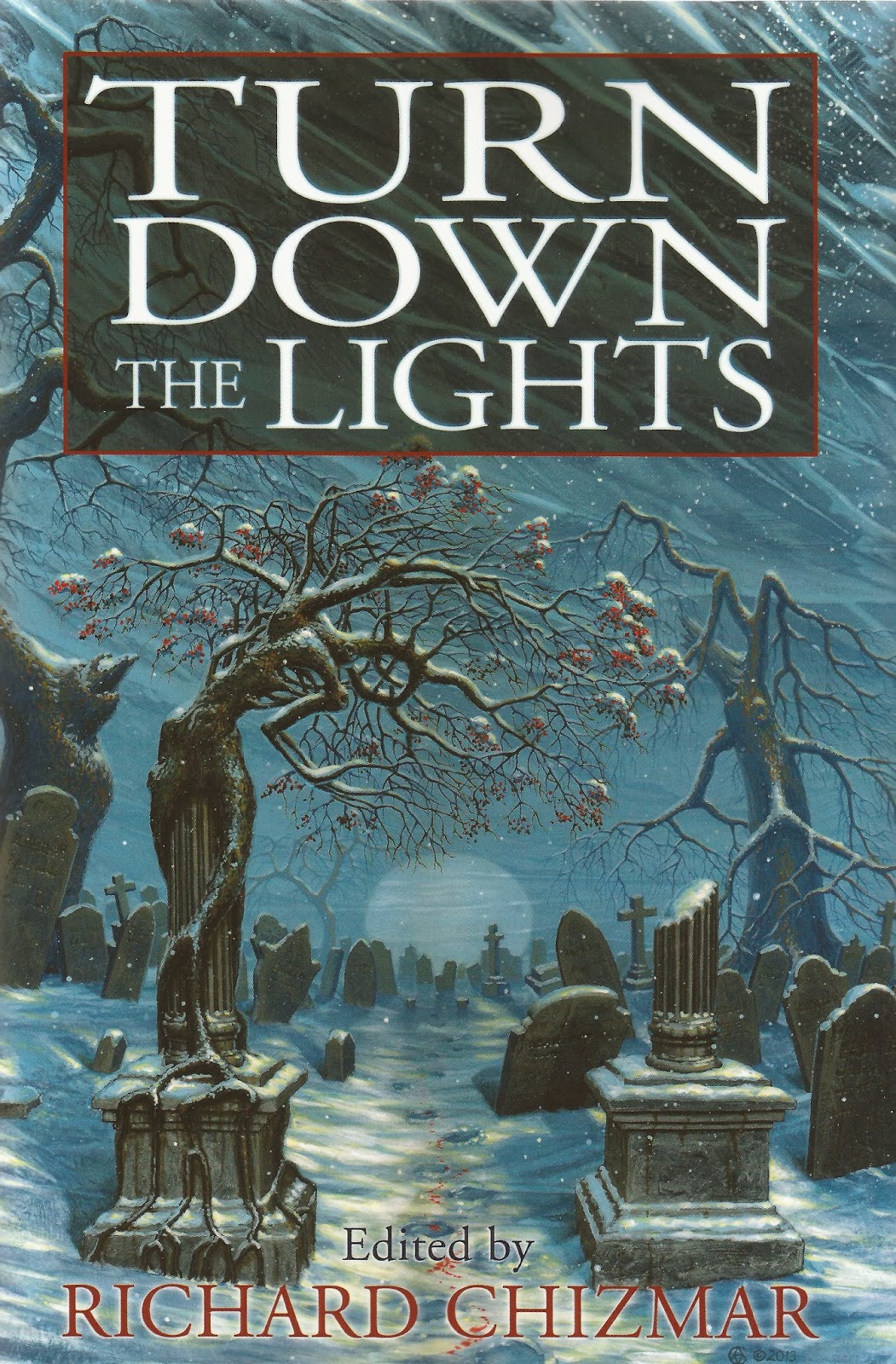 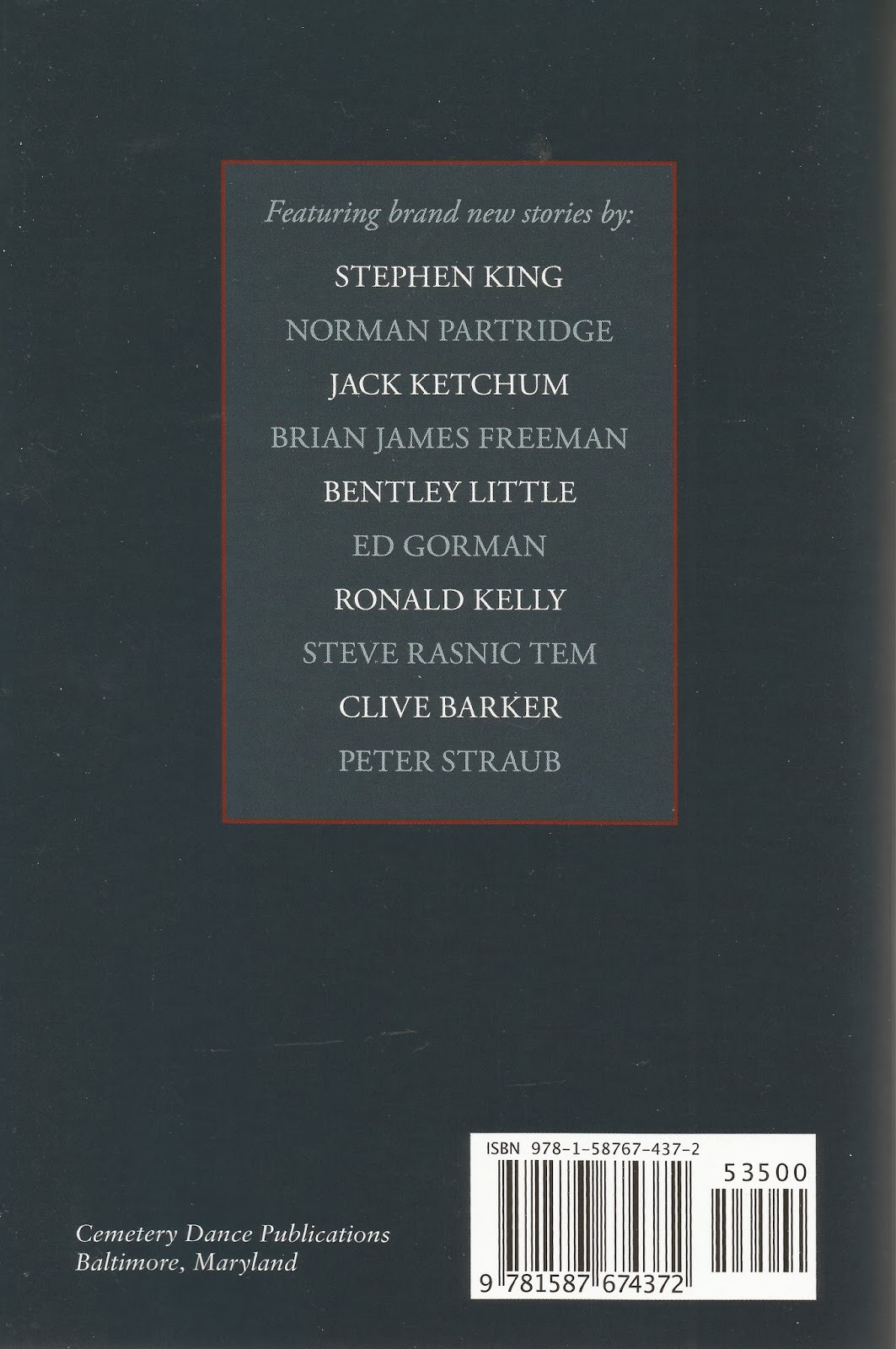 "Turn Down the Lights" by Richard Chizmar:  This is not a short story at all, but an introduction by Chizmar, who founded Cemetery Dance.  Here, he tells the story of how and why he began the magazine, and also tells you a bit about the impetus for the anthology itself.

"Summer Thunder" by Stephen King:  As you might expect given the stated content of this blog, Stephen King's story is the main reason why I purchased Turn Down the Lights.  Indeed, without its presence, it is unlikely that I would have bought the book at all.  This is not because I am one of those King fans who only wants to read King.  No sir.  But reality is reality; and reality is that I have only so much time for reading, and only so much money to spend on books.  So King does tend to be my primary focus.  I feel bad about that sometimes -- given world enough and time, I would read a couple of hundred of books per year, many of them by new authors -- but such is life.  So, yes, King is what brought me to Turn Down the Lights.

Say, didn't I just write one of these?!?  It's deja vu all over again!

Fact is, I missed quite a few weeks, so I'm just trying to clear out the backlog.  Let's find out if this results in anything interesting... 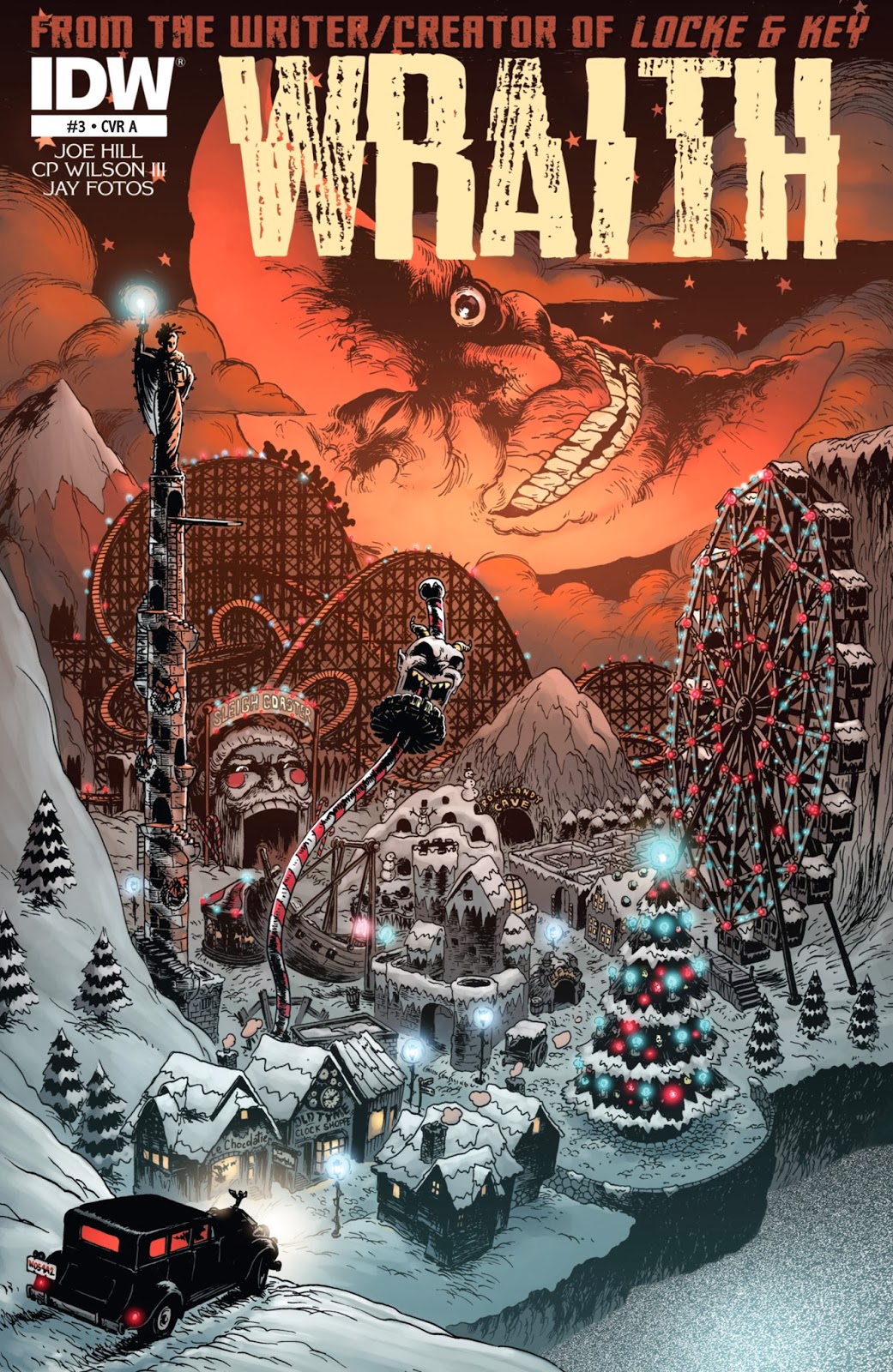 First up: the third issue of Joe Hill and C.P. Wilson III's Wraith.  That cover is pretty badass, no?  Eet eenexpleecably cozes me to weesh to tahp een a Franch accent, onh-honh-honh...!

At long last, Bryant Has Issues #42 is upon us.  The primary focus of this column will be the final issue of Joe Hill's Locke & Key, and since months often passed between issues of that comic, perhaps it is fitting that it has been nearly eight weeks since the last comics column 'round these parts.  What can I say?  Time ain't what it used to be.

In any case, the final issue of Locke & Key (Alpha #2) finally arrived on December 18, and to show how much they love their customers, IDW did what they had also done with Alpha #1: set the price at $7.99.  Which, guys, seriously, is too much for a single comic.  Even an ostensibly double-sized issue like this one.  And to hammer the point home, they produced approximately 1,473 variant covers.  The seven primary covers were collected inside a custom slipcase and the set sold for $49.99 each.

So of course, that was the one I bought.  Plus an eight copy, the Retail Incentive A cover.  Because hey, why not.

Let's have a look at that slipcase:

Nothing special, but that's typically what you get with slipcases.  I didn't buy this sucker for the slipcases, anyways; I bought it for the cover.  So let's have a look at all seven:

The Only Thing That Matters Is the Ending: A Review of "Secret Window" (2004)

I would answer the question "What is the most underrated Stephen King movie?" with one of several titles, including Dolores Claiborne and Storm of the Century, depending on what sort of mood I was in that day.  Today, I'm in a contemplative mood, and so the answer I would give would be Secret Window.

For whatever reason, this movie just doesn't get much love.  IMDb's user ratings currently sit at 6.6/10; Rotten Tomatoes has it at a 46%, and Metacritic has it at an identical 46.  All three may as well have assigned it a score of MEH.

What does this prove?  It proves nothing, except maybe that my appreciation for the film is substantially outside the realm of conventional wisdom.

Which means, I suppose, that this post will consist of me swimming against the tide.  Well, so be it.  Strap on you floatation devices and follow me; the shore is in yonder direction, and we'd better get to movin' before that oil slick notices us. 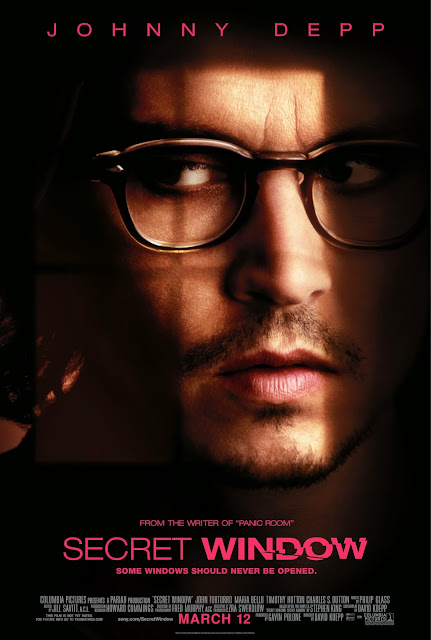 The movie was adapted and directed by David Koepp, who has made several movies that are worth checking out.  Most notable among them is Stir of Echoes, the Kevin Bacon ghost movie based on a Richard Matheson novel.  That flick got totally overshadowed by the similarly-themed The Sixth Sense, which released the same year; but in the years since, it has built a sturdy reputation for itself.
Read more »
by Bryant Burnette at 1:20 AM 16 comments:

I got a few.  Gave myself a few, too, including a sealed-in-the-package Sony Walkman cassette player, which I purchased for the express purpose of listening to this:

This BBC Radio 4 adaptation was never released on cassette -- nor, as far as I can tell, any other medium -- here in the States.  However, I found a reasonably-priced copy of the cassettes on Amazon and bought them, and figured the thing to do was buy an old-school Walkman to listen to them on.  I'm a nerd like that.

Now, to tell the truth, I could have avoided all of this.  I had the adaptation on mp3 already, thanks to a file I found floating around the Internet a few years ago.  I'd never gotten around to listening to it, but knew I'd want to eventually.  So in theory, I could have just dug those mp3s out of the digital storage locker and given them a spin on my other Walkman (the mp3 player).

Given the option to listen to the real thing, though, I'd prefer to do that.  And so I did.  And now, here I am, telling you about it.  What a world, eh?
Read more »
by Bryant Burnette at 6:14 AM 8 comments: