Nobody Should Think About Winter In August: A Review of "Night Surf"

Originally published in the Spring 1969 edition of Ubris, the University of Maine literary magazine, "Night Surf" is best-known to King fans as the short story in Night Shift that serves as a bit of a spin-off to The Stand.  The story seems to take place in the same universe as that epic novel, and tells the tale of a small group of people who are trying to continue their lucky streak of avoiding Captain Trips.

Viewing it only as an overture to The Stand is selling "Night Surf" . . . wait, wait, hold on a second.

Fair warning: I seem to be determined to type "Night Shift" instead of "Night Surf"; I've corrected myself three times now, and suspect that eventually I'm going to make the mistake and fail to notice/correct it.  So when and if that happens, my apologies; I do know the difference between the two, but my fingers apparently can't keep the difference in mind tonight.
Read more »
by Bryant Burnette at 11:44 PM 11 comments:

A Look at Some Vintage Issues of Cinefantastique

If you are a child of the American eighties like me, and if you are also (like me) obsessed with sci-fi/fantasy movies and television and whatnot, then odds are good that you are familiar with the magazine Cinefantastique.

In the actual decade of the eighties, I myself was always more of a Starlog kid. In fact, I don't recall ever buying an issue of Cinefantastique until 1990, when an issue devoted to Star Trek caught my eye.  I bought the issue, and then bought the mag on a regular basis for the next few years, until my magazine-buying phase sort of died out in general.

Among the highlights of the Cinefantastique collection I built was a trio of issues that had cover stories devoted to Stephen King: on the movie version of Misery, and then the television versions of The Stand and The Shining.

Sadly, those three -- along with a later issue devoted to Babylon 5 -- were the only copies that survived my move from one apartment to another in 2003.  That was a hellish move, beset with all sorts of personal strife and such, and there were numerous boxes of things that accidentally got thrown away rather than moved.  I didn't realize this until I finished unpacking several days later, at which point in time, it was too late to do anything about.  Luckily, my Stephen King collection was 100% intact, which explains how I still have those three issues.  (As for the Babylon 5, issue, I have no idea how that one survived -- every single one of my Starlogs was lost, as were all of my Star Trek magazines and comics, as well as most of the novels, and all my Premieres, most of my Entertainment Weeklys, et cetera.  Ugh . . . just thinking about it makes me ill.)

Jump-cut about a decade into the future, and I found myself looking at the Misery issue.  As I am wont to do, I began getting nostalgic about all those old magazines that I lost, and so I determined that I'd start trying to reacquire them.  In the process of doing so, it made sense to also go back and start getting older issues from before the time I began collecting the magazine.

Since I would probably call myself a bigger Stephen King fan than I am a fan of anything else, it made sense to begin by tracking down the other King-related cover issues.  From there, I did a little research and found out what issues contained King-related articles, and started working on those as well.  While I did this, I also picked up a few issues that had promising cover stories about other things I am passionate about (or, in some cases, that were too cheap to pass up).  I've even picked up a few Starlogs, though only a few.

Here's the upshot: I figured it would be fun to write a (probably very lengthy) post about it, replete with images and fun quotes and the like.  Some of this will not be King-specific, but much of it will, and anyways, I think it'll be fun.  So let's get to it, starting with:


The superb cover art here is courtesy of Roger Stine, and boy, I'd love to own a poster-size version of that.  I mean, it's horrifying (the image of Carrie drenched in blood is one that I saw as a child, and was kinda wrecked by), but I love it.
Read more »
by Bryant Burnette at 1:43 AM 30 comments:

A Review of "Wolverton Station" [by Joe Hill]

About a month ago, Amazon released a new e-book from Joe Hill, a short story called "Wolverton Station."  It isn't, technically-speaking, actually a new story; it made a prior appearance in a magazine in 2011, just so's you know.
For whatever reason, it took me until now to make time to actually sit down at the computer and read it (I don't have a Kindle, so have to use the Kindle PC app, like a savage).  But having read it finally, I am here to give you a quick thumbs-up/thumbs-down. 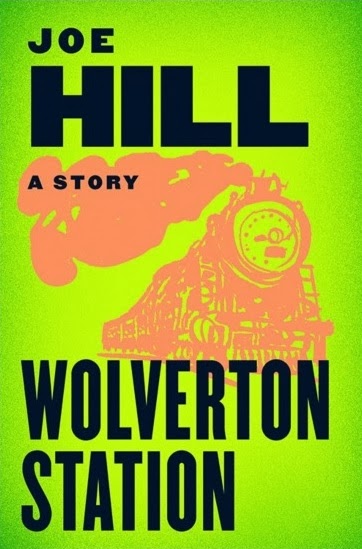 Thumbs most definitely up.
Read more »
by Bryant Burnette at 5:14 AM 4 comments:

Over the holidays, I acquired a copy of the new anthology xo Orpheus: Fifty New Myths, which I purchased for two reasons: "The Status of Myth" by Kelly Braffet and Owen King, and "Lost Lake" by Emma Straub and Peter Straub.

Now, I need to confess something.  I may have mentioned it before at some point; apologies if you've already heard it, but it's an important point for me to make up front.  Or at least, it seems important to me, so let's roll with it.

The point is this: I am terrible at reading anthologies.  I don't buy a huge number of them.  In fact, I tend only to buy them if one of my favorite authors has a story in it.  And then, I am awful -- just absolutely awful, ya ken -- about ignoring all the other stories and only reading the ones written by authors I already like and read regularly.  This always makes me feel like a dick.  Always, always, always.  Not only because it feels -- and is -- insulting to the authors whose work I'm skipping out on, but also because you've got to figure that I'm missing out on some stories I'd like, maybe even love.

The real problem is one of time: I just don't have as much of it as I wish I had.  Who does?  Nobody I know.  But because of that, it has caused me to become extremely selective in terms of my reading habits over the last decade or so.  That bums me out.  In a perfect world, I'd read everything, by everyone.  This isn't that world, though, so I find myself severely behind the times when it comes to reading.  The same thing is beginning to happen with movies, and happened long ago with music and television.  The sad fact is that the older I get, the less I'm able to be a generalist; I'm forced into being a specialist when it comes to my hobbies.

It bums me out, but what can a body do?

A body can do this: resolve to, at the very least, put an end to the trend of only reading one or two stories out of anthologies I purchase.  From now on, if I buy one, I'm reading the whole thing.

I started that resolution with xo Orpheus.  How'd it work out? 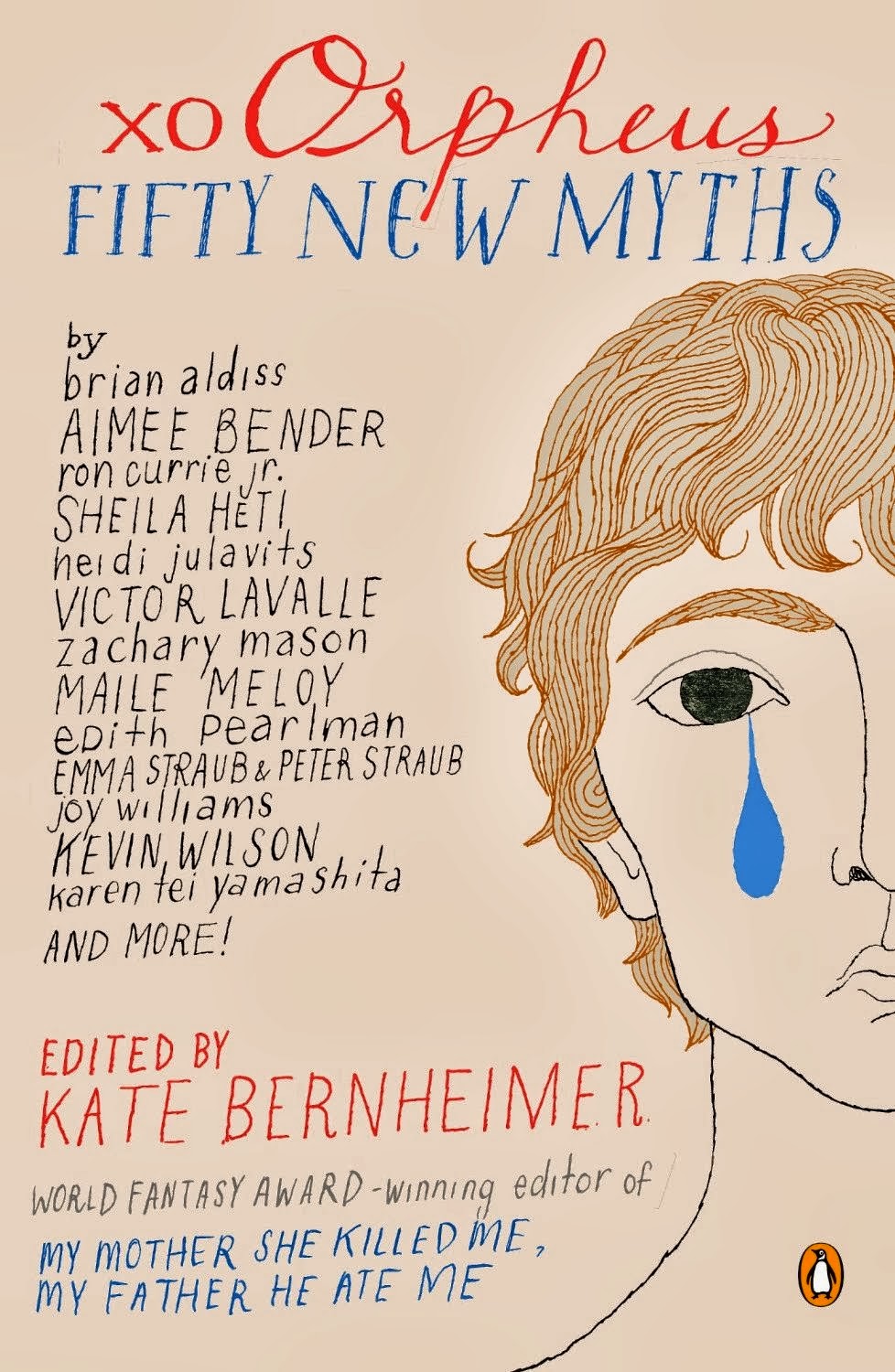 The concept of the anthology is based on the idea that humanity has entered an Age of Anthropocene, an epoch in which humanity has had an unprecedented effect on its environments.  Not necessarily a good one; not entirely a bad one, either, though.  Anyways, the upshot of it, according to editor Kate Bernheimer in her introduction, is that in a great many ways, WE are now the gods.  If we are having that huge a hand in our own development, what does "myth" mean?  Surely it can't mean the same thing it meant even a few hundred years ago.  Right?
Read more »
by Bryant Burnette at 5:34 AM 6 comments: