A Review of the "Creepshow" Soundtrack

I mentioned during one of my recent magazine-a-thons that I used to be a collector of movie soundtracks.  Well, there are several recent(ish) soundtracks to Stephen King movies that I've been wanting to review, and now seems like as good a time as any to make that happen.  So you'll be getting a few of those over the course of the next week.

We'll begin with the most recently-released one, and work our way back from there: 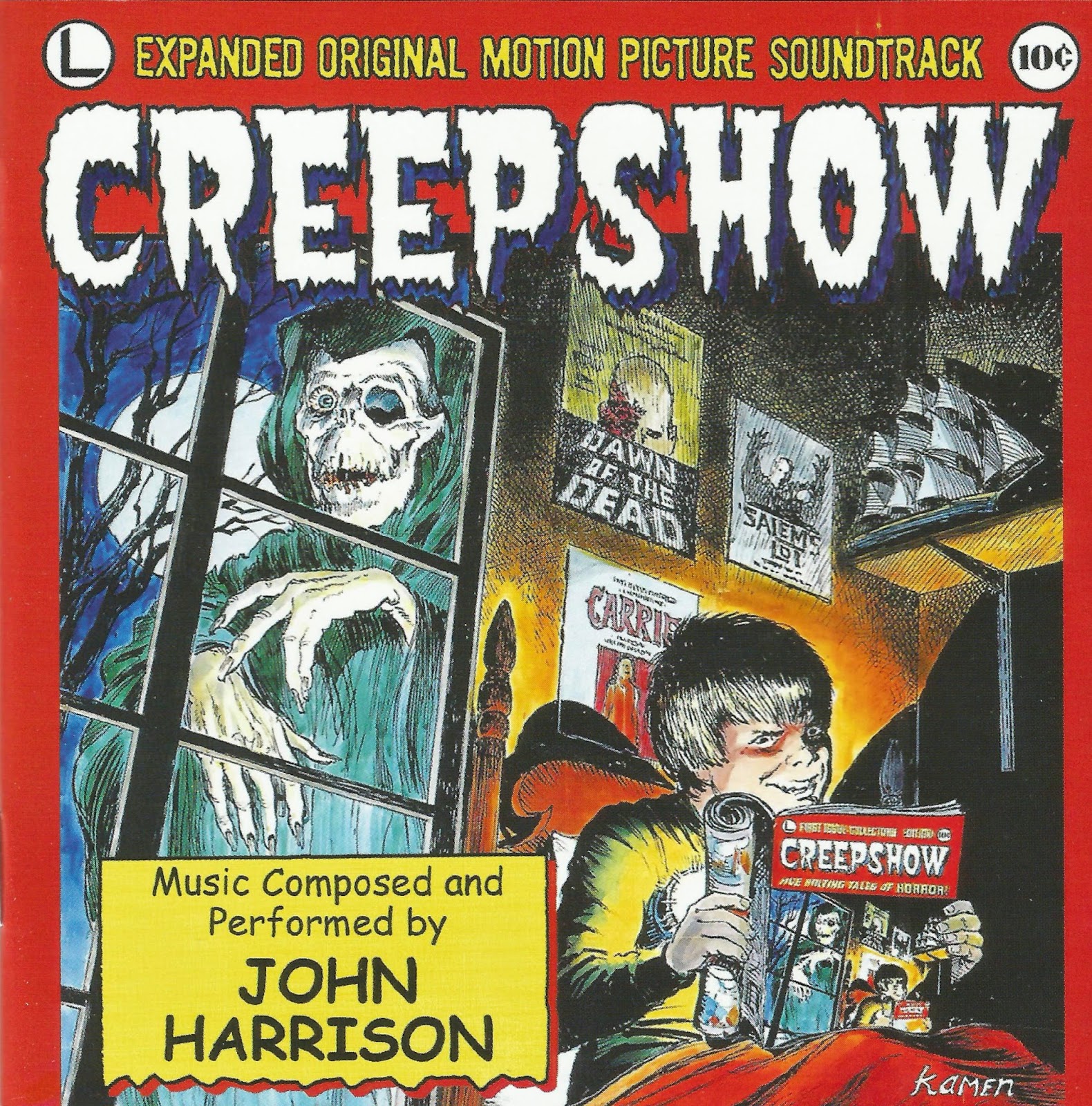 John Harrison's Creepshow had been released in the past, first on LP by the label Varèse Sarabande, way back in 1982.  There were only nine tracks on that LP, which represents nearly all of Harrison's music.  When the label La-La Land Records put out a CD in 2003, they ported over everything, and filled the disc out with several John Harrison compositions from other projects, including the King-scripted Tales from the Darkside episode "Sorry, Right Number."

La-La Land recently put out a limited edition release of the entire score, however, which is cause for celebration if you're a fan.  The previous release contained 41 minutes of Harrison's score for the film, whereas this new one contains the entire score . . . all 45 minutes of it.  So, yeah, not much new there.  However, the disc also contains 30 minutes of the rest of the score to the movie: namely, source music, plus the library music George Romero used.  This is great news, because it means that ALL of the music used in Creepshow is finally represented.  Or, if not literally every single note, then certainly the vast majority of it.
Read more »
by Bryant Burnette at 7:32 AM 8 comments:

Another in the Increasingly-Self-Indulgent Series of Magazine Reviews

I have good news, and I have bad news.  Which do you want first?

The good news, you say?  Very well.  The good news is that I'm looking over at the other side of my desk, at the stack of magazines which began this business, and if I am not mistaken, they are sufficiently few in number that this post will be the final one in the series.  So you won't have to suffer through them any longer!

The bad news is that the first mag out of the gate features a cover story on Sleepwalkers: 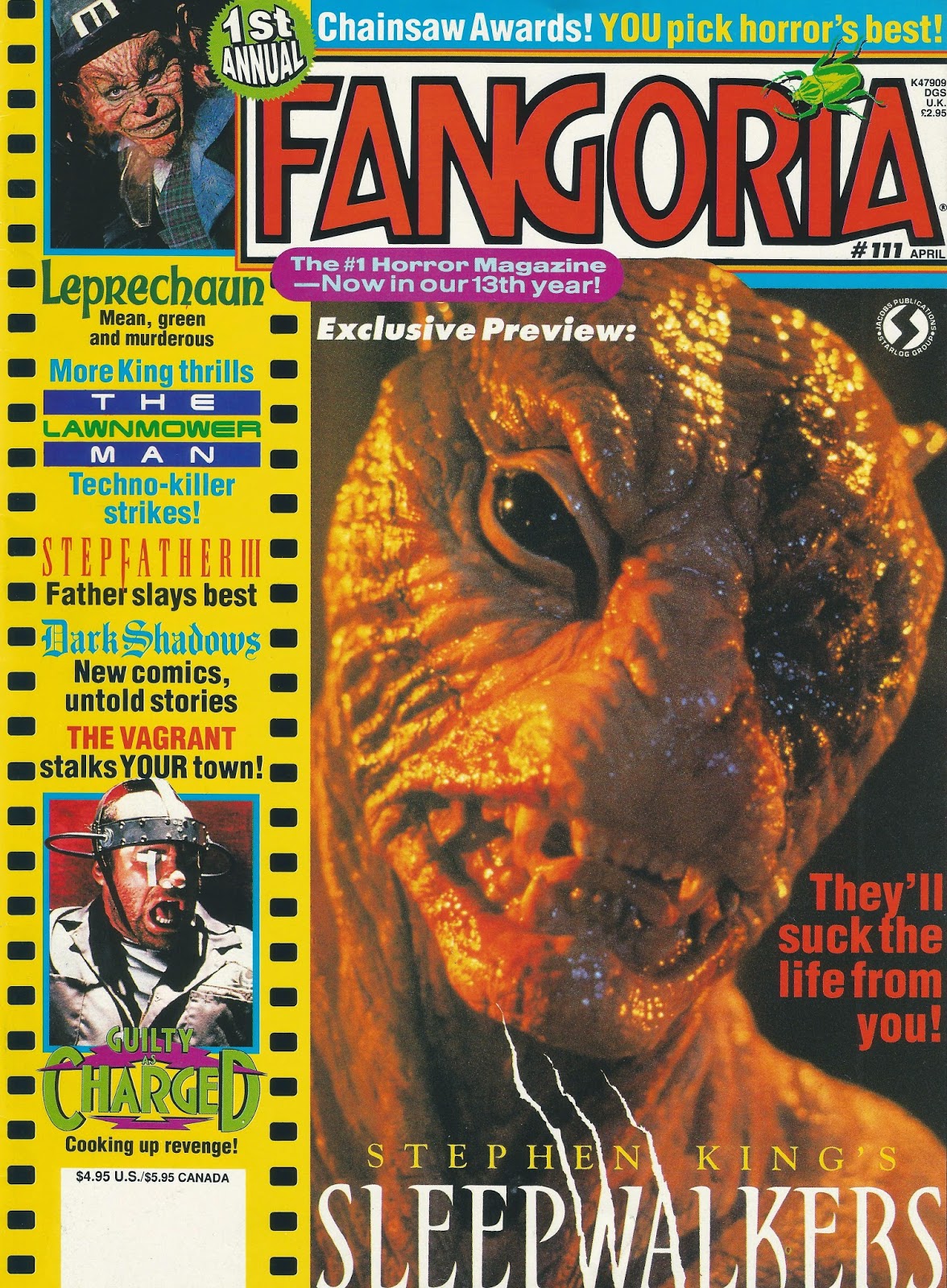 I know what you're thinking: "sure could go for a Snickers ice cream bar right now."  Well, go ahead and treat yourself, says I.

I know what else you're thinking: "has this guy not run out of magazines to yammer on about yet?"  Turns out, no; no, I have not. 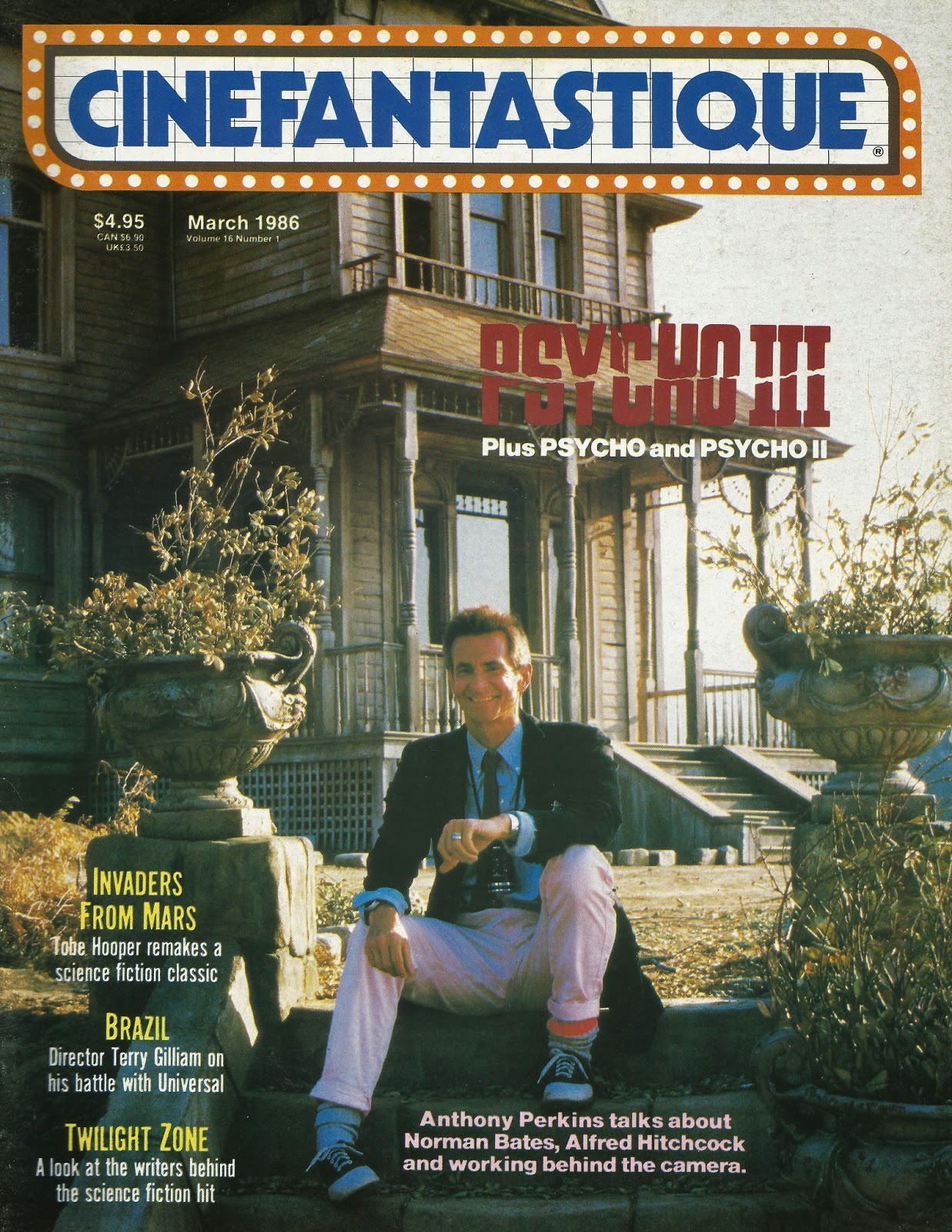 I've never seen any of the sequels to Psycho, including the one directed by Mick Garris.  Also including Bates Motel, which is not a sequel, or really even a prequel.  None of these things appeal to me in the slightest.

You know what appeals to me?  Stephen King.  Also, graceful segues.

The "Carrie" Remake: Even If You've Seen It, You Haven't Seen It

I'm a lifelong movie fan.  One of my earliest memories involves seeing The Wizard of Oz on television and being so scared by the giant floating Wizard head that I went and hid behind the couch for a while.  I've got numerous other early-life memories involving movies to go along with that one (not all of them pleasant), and have continued making movie-related reminiscences at a steady pace ever since.

Like most people, I tend to think of movies as existing in a definitive form.  Let me explain: when I say, for instance, "The Wizard of Oz," what I mean is "the 1939 MGM film titled The Wizard of Oz, which runs about 102 minutes in length and is mostly color with a bit of sepia-tone (or black-and-white) at the beginning and the end."  We all experience essentially the same movie, no matter where we see it, how we see it, or when we see it; so when we think "The Wizard of Oz" the odds are good that that is what we are thinking of.

The truth, however, is far from that simple.  There were several sequences filmed for the movie that did not make it into the final edit, including an entire musical number called "The Jitterbug."  Also, the Scarecrow's introductory scene was initially much longer, and included a fun gag with a gigantic pumpkin.  The Jitterbug sequence is apparently lost for all time, but the extended version of the Scarecrow's scene survived, and is included on most DVD and Blu-ray versions as a bonus for fans.  I felt a sort of mental disconnect upon seeing that deleted footage for the first time; I'd been a massive fan of the movie for almost literally as long as I could remember, and had seen the movie dozens of times.  Glimpsing "new" footage was both thrilling and oddly off-putting.  What was this stuff?!?  Where did it come from?!?  Had I somehow peeked into a different universe of some sort?  I knew better, but what I knew and what I felt were not entirely in sync.

What I had gotten a peek into was the creative process.  Which, to be fair, is a bit like getting a peek into a separate universe; Stephen King's Dark Tower series could speak to that idea, and Alan Moore has practically made a career out of exploring the concept.

The fact is that most movies exist in that multi-faceted fashion.  We may or may not ever see any of the footage that the filmmakers decide (for one reason or another) to cut out; but rest assured that unless a movie consists of a single take with no edits, there is footage that gets eliminated.  Some directors are known for their propensity toward filming multiple takes of a single scene; some actors are known for their propensity toward never giving the same performance from one take to the next.  A person who had access to ALL of the footage from movies made by those sorts of artists could almost certainly create edits that were, in effect, wholly different films from the one released to cinemas.

It's a weird thing to consider, isn't it?  We think of movies as being written in stone, but in fact, they are written in eminently-erasable pencil.  And if someone with the money and power to do so were to decide to wield an eraser?  Well, ask George Lucas fans about that; they can tell you all about what happens next.

Within my lifetime, the craze for Director's Cuts (or extended cuts) of films has boomed.  From The Abyss to Close Encounters of the Third Kind to Blade Runner to Dune to the hugely successful extended cuts of the Lord of the Rings films to the much-panned (but even more successful) Special Editions of the original Star Wars trilogy, alternative edits of films have become much more common than they once were.  In some cases, those longer cuts took a perceived artistic failure and reversed that perception.

Which brings us to the 2013 version of Carrie, and its extended cut. 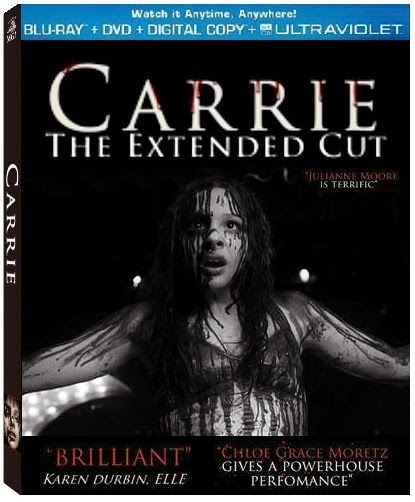 Sadly, there is no such thing as a Blu-ray Carrie Extended Cut.  Not yet, at any rate.  But from practically the moment the movie premiered last October, there have been rumors of a longer original cut that contains some two dozen scenes which were either omitted from the final cut altogether or were trimmed down considerably.  Including the one that was released theatrically, there are also a minimum of four different endings, all of which allegedly screened for test audiences at various points in the editorial process.

So the footage certainly exists, and so does a fan movement to see a Blu-ray release of a longer cut of the film that incorporates as much of that footage as possible.  We're going to talk about some of that footage today, and we're also going to talk to the fan who has spearheaded the movement.
Read more »
by Bryant Burnette at 2:21 AM 8 comments:

Yet Another Look at Some Vintage Magazines 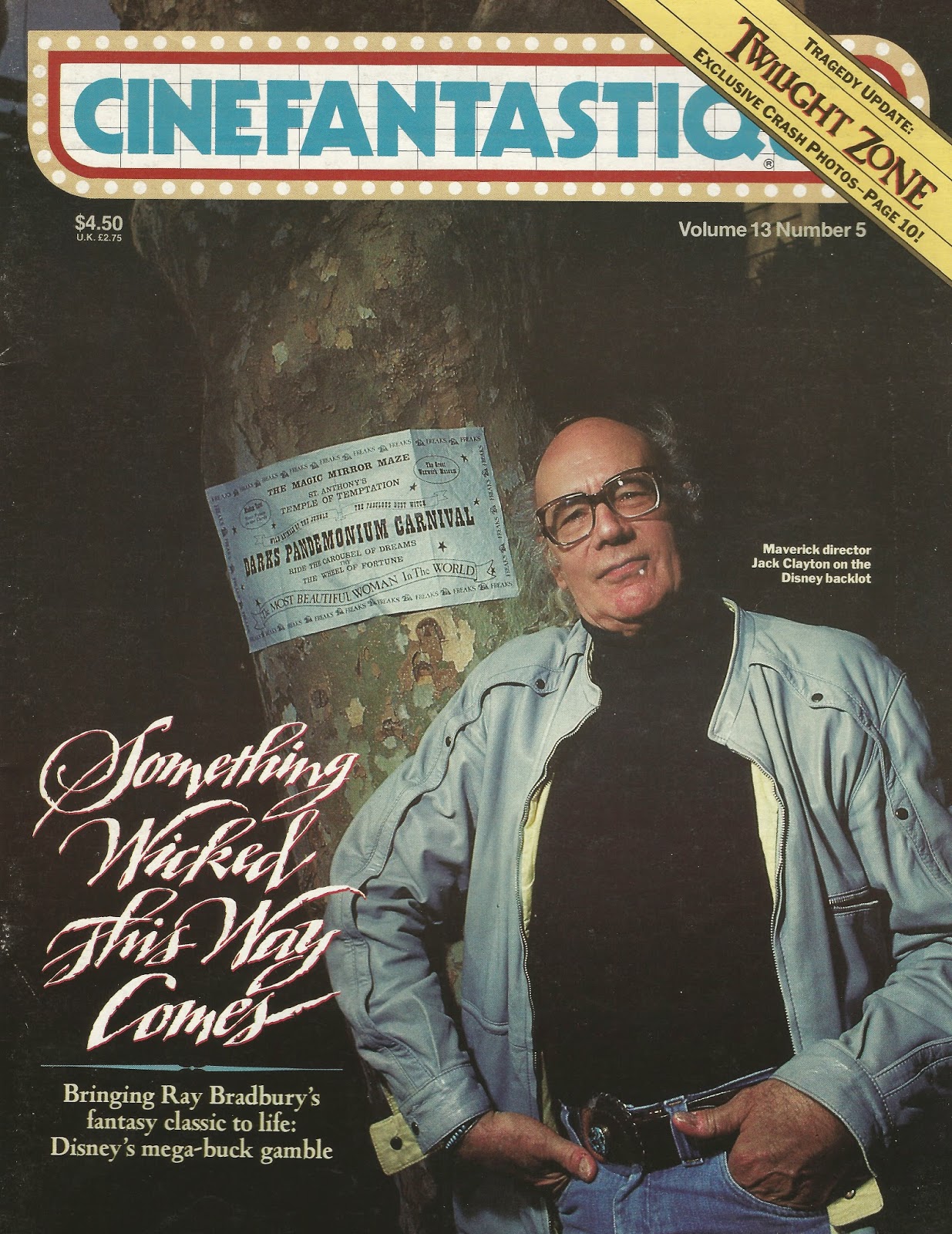 No offense to director Jack Clayton, but that surely must rank as one of the most boring covers of Cinefantastique's history.

A(nother) Look at Some Vintage Magazines

A few weeks back, I published a post that delved into a slew of old Cinefantastique back issues I'd obtained, most of which had fun Stephen King content in them.  At that time, I was still waiting on a few other issues to arrive in the mail, and so I threatened promised to write a sequel to that post in the not-too-distant future.

Well, the not-too-distant future has arrived.  We still don't have flying cars, and the zombie apocalypse still hasn't broken out.  But by gum, I got those other issues of Cinefantastique in the mail, so at least some prophesied events have come to pass.

In addition to the Cinefantastiques, I also scooped up some other goodies, so we'll have a look at them as well.

Let's start off salaciously, with this: 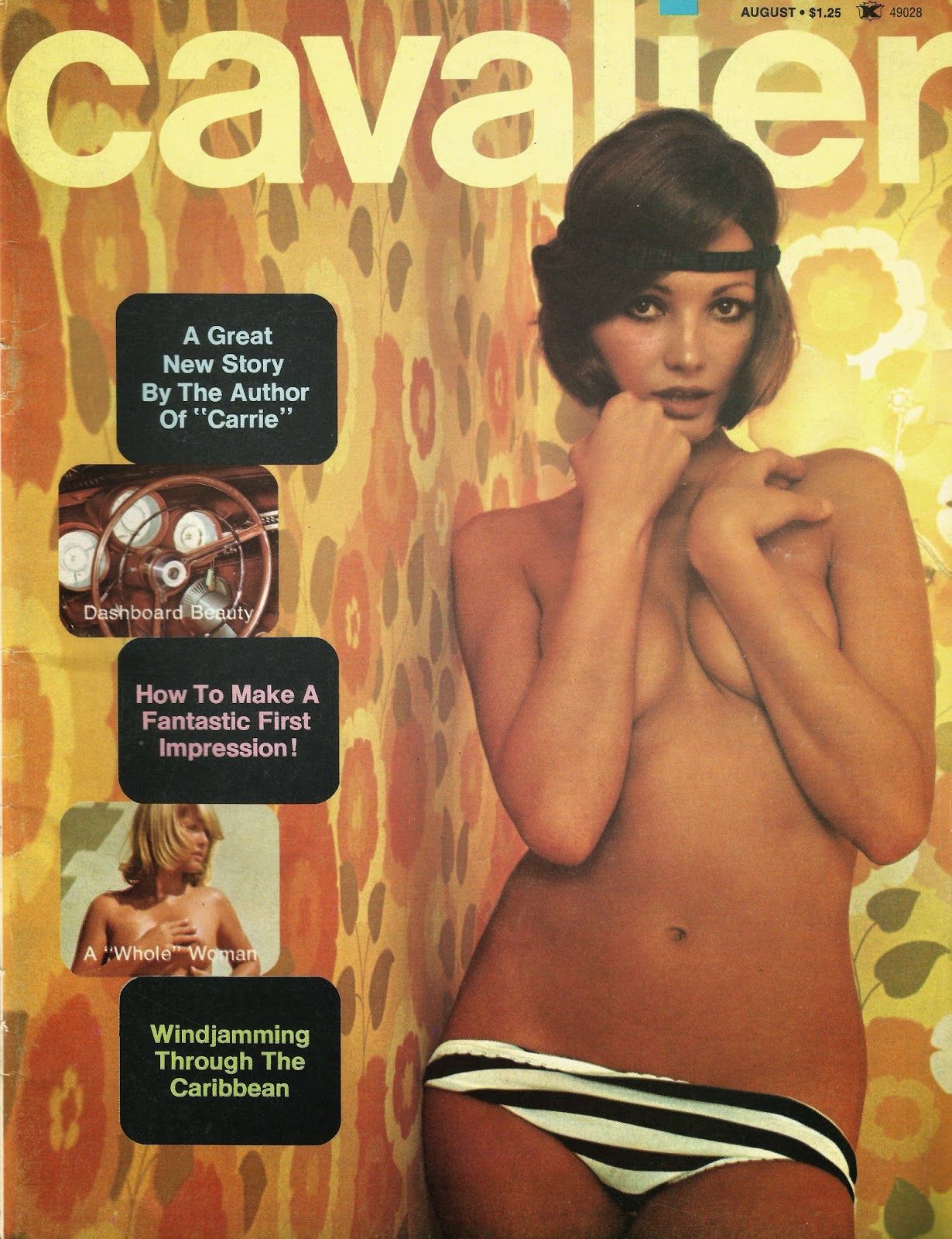 Speaking of recent posts, I also put up a review of the short story "Night Surf" not long ago, and in the course of writing that, I obtained a copy of this 1974 issue of Cavalier, which contained the first professional publication of the story.  (It had also appeared in a 1969 issue of Ubris, a student publication at the University of Maine.)  I was curious to see how different the 1974 version of the story was from the 1978 version that appeared in Night Shift (King's first short-story collection), and I was shocked to find a copy of the magazine on Amazon for only about $10!

So needless to say, I snapped that sucker up right quick.
Read more »
by Bryant Burnette at 12:51 AM 16 comments:

Today's post is going to be a challenge.  A couple of weeks ago, I saw the new Muppets movie, Muppets Most Wanted, which is awesome.  One of its best elements is the songs by Brett McKenzie; I got the soundtrack a few days ago and have been listening to it ever since.  Hence, I've got about six songs vying for attention in that place where things get stuck in your brain.  So if I start typing out lyrics and don't notice that I've done it, don't be too surprised.  I'll fight it, but I've only got so much fight in me.

We begin with some Joe Hill: 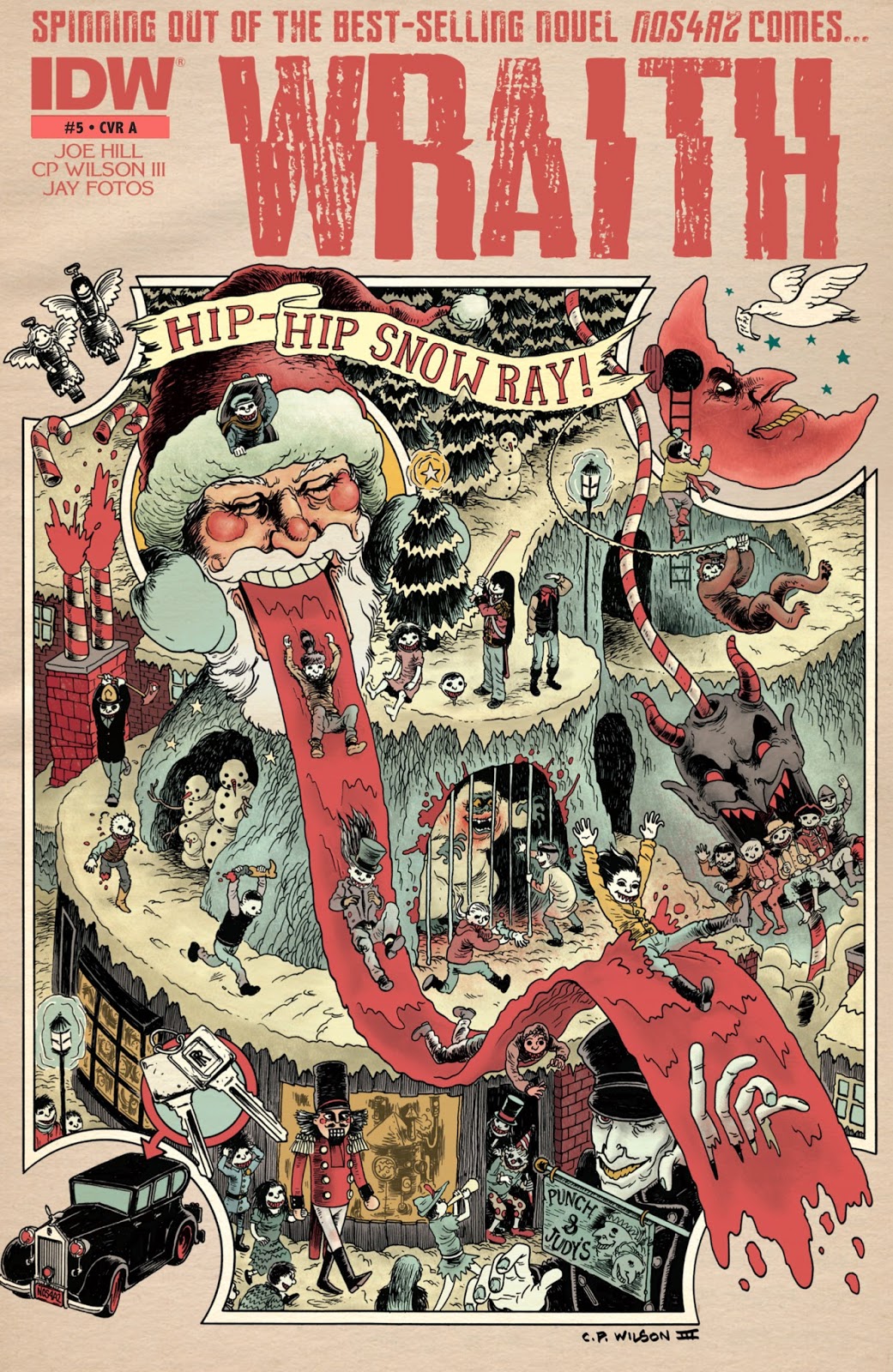 The rest of the issue ain't so bad, either.  If you saw or heard any interviews with Joe Hill around the time of NOS4A2's release, then odds are good that you heard him talk about what fun it is at Christmasland, where the kids get to do charming things like play a game of Scissors For The Drifter.

Well, in Wraith #5, you'll finally get your chance to see what a game of Scissors For The Drifter consists of.  Turns out, it's pretty much exactly what you'd expect.
Read more »
by Bryant Burnette at 6:16 PM 4 comments: