A reader suggested this topic as good fodder for a post a while back, and I agreed that it sounded like a worthy use of my time.  Now, finally, I'm actually getting it done!
A word about the format: my goal here is simply to rank the cover art for the books.  A moment's consideration will reveal the fact that nearly every title King has published -- and he's published a lot -- has been published in multiple editions.  In some cases, there may be well over a dozen editions in America alone.  It would be a fool's errand to try to rank all of those editions; I don't even have the energy (or the interest) to attempt to catalog them all, much less then figure out how to rank them.  I'm not saying it can't be done; but I'm saying it won't be done by me.  Ever.
So, here is my criteria: for each book, I will be considering whatever was the mass-market American first edition, be it hardback or paperback.  No limited editions will be considered; no British editions will be considered; no second editions will be considered.  Hopefully, no errors will be made regarding any of this, but if errors end up being made, I apologize for them in advance.
I also apologize in advance for the certain-to-occur poor choices on my part, and also for the incredible lack of scientific method which will be evinced.  You are welcoem to point them all out in the comments!
Without further ado, let's begin with the worst, which is unquestionably:

The jacket design here is courtesy of Rex Bonomelli, who seems to have felt that it was a good idea to make potential purchasers think their eyesight might finally have begun to fail.

A Review of George Beahm's "The Stephen King Story"

Hard not to love a King scholar named "beam." 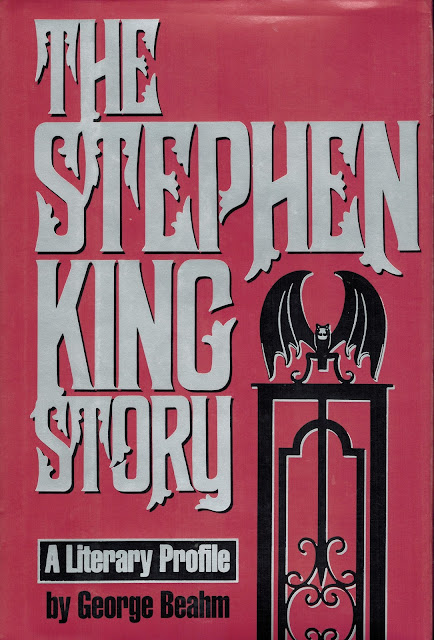 This book was published in 1991, and 1991 just so happened to be smack-dab in the early years of my Stephen King fandom.  I'd become a huge King fan in 1990, and had promptly purchased and read every book of King's that I could get my hands on.

I've said version of this elsewhere, and I apologize if you've heard it from me before, but it bears repeating: in 1991, there was no such thing as the Internet.  Not for people like me, at least.  Those of you who weren't around back then might have a hard time wrapping your mind around this idea, but take it from who knows: you couldn't just Google things; you couldn't fall down the rabbit hole of Wikipedia, or a Wiki devoted to your favorite subject; there were no fan blogs designed to put information about (insert obsession here) into the world.

That shit didn't exist, y'all.  That lack meant that one could be a major fan of some author or band or film director or whatever/whoever, and not know all that there was to know about that topic.  Information was sometimes very hard to come by; maybe magazines like Starlog or Fangoria would fill in some of your gaps, or maybe you'd go to a con and learn some things from panelists.  Or maybe not.  Maybe -- maybe -- you were stuck with whatever you were stuck with.

In my case, as it pertains to Stephen King fandom, I was mostly stuck with what I was stuck with: namely, King's books.  Not a bad thing to be stuck with!  But I wanted to know more, and a few books about King came along to help fill in those blanks.  Douglas E. Winter's Stephen King: The Art of Darkness was (I think) the first, but I found a copy of George Beahm's book The Stephen King Companion not long after.  I read that sucker probably half a dozen times.

At some point in 1991, I stumbled across Beahm's then-new book, The Stephen King Story, and I bought it and devoured it.  I reread it recently, and while it no longer contains the thrill of discovery that it possessed for me in 1991, it still entertained me and provided me with a satisfying narrative of the progression of the first couple of decades of King's career.

What's going on with "Cell"?

Hello, all!
I'm breaking the hiatus briefly to toss up a post about something which came to mind tonight. 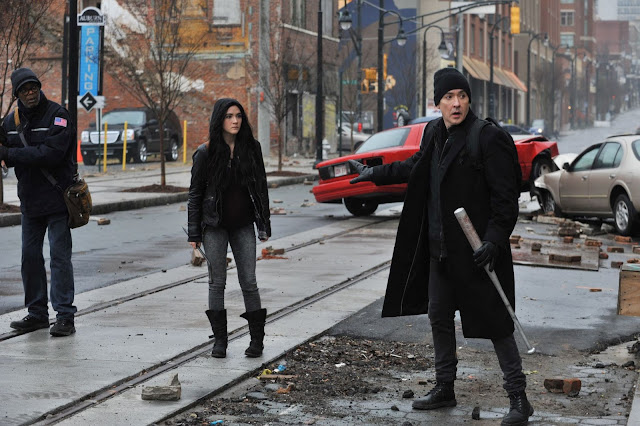 Say, uh . . . does anybody remember that time John Cusack and Samuel L. Jackson starred in a movie version of Cell?  Filming has been finished for quite some time now, so wouldn't you figure that there'd be, like, a release date or something?

This is similar to what happened last year with both Horns and Mercy, which sat around for months waiting on somebody to actually distribute them.  Neither movie was all that good (the former is okay enough to be worth a look, whereas the latter is doo-doo), which leads me to my fear: Cell must not be too good, either.

Maybe I'll end up being wrong, but I doubt it.  If you've got a zombie movie with two major stars in it, you don't just sit on that sucker; you put it into theatres.

Unless it's crap, in which case you sit on it until you can figure out a way to minimize your loss.

So, my guess...?  We've got yet another crapola-fest on our hands.