We Are No Longer Under the Dome

At least one commenter has expressed disappointment that I was not reviewing each episode of Under the Dome during its third season.  I'm disappointed, too; but the move to Thursdays made it nearly impossible for me to do so in a timely fashion (unless I'm on vacation, I work every Thursday, Friday, and Saturday night), so I decided to just opt out.
I have been watching, though, and I thought it would be worth logging on tonight and dashing off a few brief words about the season in whole now that it has finished.
Spoilers ahead, so beware. 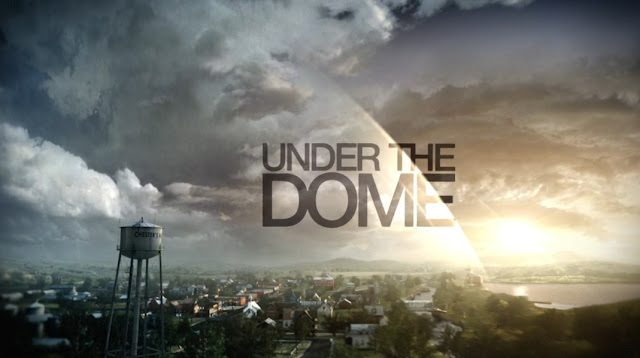 What, you might ask, does James Bond have to do with Stephen King?

Answer: virtually nothing.  One of the main characters in The Langoliers might fairly be said to be a sort-of Bond-like figure, I suppose; plus, Pierce Brosnan starred in both The Lawnmower Man and Bag of Bones.  But that's about it.
Nope, this post is just 'cause, y'all; just 'cause.

Let's talk fandom for a moment.  Despite the hiatus The Truth Inside The Lie has (mostly) been on this year, y'all know me; know how I roll when it comes to Stephen King.  New book?  I'm there first day.  New short story?  I'm buyin' that magazine posthaste.  I watch all the movies, I read all the comics, I do my best to watch all the interviews and lectures.  In short: I'm a fan, and there's no need to prove it to anyone.

But while my King fandom is certainly my most voluminous fandom, it is by no means my oldest one.  That distinction goes either to Star Trek or to James Bond, and the reason why I included the "or" is because I literally can't remember which one I encountered and fell in love with first.  If one of Silva's goons had a gun to my head and insisted that I pick one, I'd say it was Bond that came first; but to be honest, I just don't know.

What I do know is that my love for both predates my love of Stephen King by at least ten years, and maybe close to a dozen.  This is not to say that I love either more than I love King; it's just to say that they come first if only in a chronological sense.

And because of that, those fandoms of mine helped me develop my sense of how to watch/read/interpret stories.  I became the sort of Stephen King fan I am in some degree because of the way I developed as a fan of both Bond and Trek.  In all three cases, I quickly became less than content to restrict myself merely to the primary form of those stories: I was not content only to view James Bond movies, and turned to the novels to supplement my enjoyment; the same goes for Star Trek; and in the case of Stephen King, the opposite was true.

The Truth Inside The Lie is, for me, an exploration of the reasons why: why am I a Stephen King fan?  What does it say about me?  Why did I become a massive King fan as opposed to a massive Tom Clancy fan?  I read both in high school; so why did one stick, and not the other?

Ultimately, it's a simple pursuit: who am I?  Why do I enjoy the things I enjoy?  Where did I come from, and where am I going?

So that's why talking about James Bond on this particular Stephen King blog is permissible.  In order to examine those "why"s, Bond has to be in the conversation somewhere.

If you are still reading and have not given yourself a cerebral hemorrhage through the viciousness of your rolling eyes, know ye one and all that I won't be doing much more fancy talk of that nature during this post.  I suspect I'll be talking about a lot of explosions, breasts, and theme songs instead, possibly sometimes all at once.

Let's get started by briefly considering the movie that gets my vote for the absolute worst James Bond movie of them all:
#25 -- Never Say Never Again (1983) 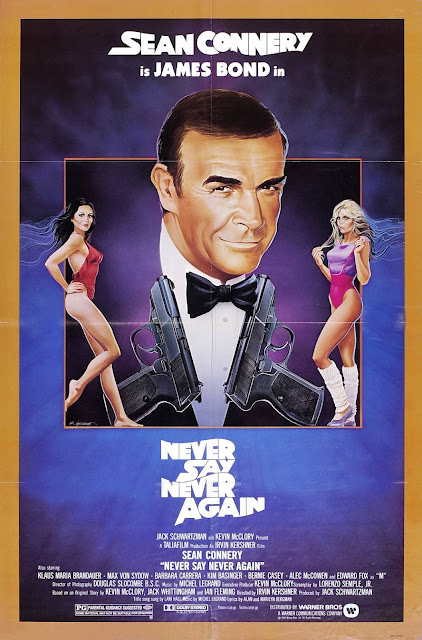 Purists will point out that Never Say Never Again is not a "real" James Bond movie, and from a certain point of view, they are right.  The film was not produced by the same production family that made the other Bond films, starting with Sean Connery in Dr. No and going up to this year's upcoming Spectre with Daniel Craig.

How, then, does Never Say Never Again exist?