For today's post, I'm going to do several things.  First, I'd like to make a bunch of lists.  We all love making lists, right?  Right!  Well, why wouldn't we?  Specifically, the lists I'd like to make are these:
Did I just make a list of lists?  Yes I did.
The second part of the agenda will be to simply have a look at a small library of Lovecraft-centric books, most of which I purchased during the course of the last few months, while I was in the thick of exploring Lovecraft's work.  In writing my first two Considering Lovecraft posts, I found it necessary to do a bit of research on the stories, and that process inevitably brought books to my attention; in many cases, I simply couldn't resist the lure to buy them.  I've read none of them yet, but I thought they were all worth showing you; that way, in case you get bitten by the Lovecraft bug, you'll at least have some info at your hands about what's out there.
My plan is to read all of these books eventually.  That ought to go without saying, but around these parts it's by no means uncommon to buy a book purely out of the desire to have it.  In a perfect world, I'd read every book; but this is an imperfect world in which there's only so much reading time to go around.  And the urge to get back to reading (and blogging about) Stephen King's books and stories is mounting daily; it won't be put off, nor should it.  Still, I'd like to intersperse my King explorations with delvings into these various Lovecraft books.  I think what I'll do each time I tackle one is come back to this post and edit it with whatever reviews and reactions seem appropriate.  I'll add a comment in the comments section each time, so if you are interested enough in all this to actually want to keep up with it, check the box that will allow you to be informed when new comments are published. 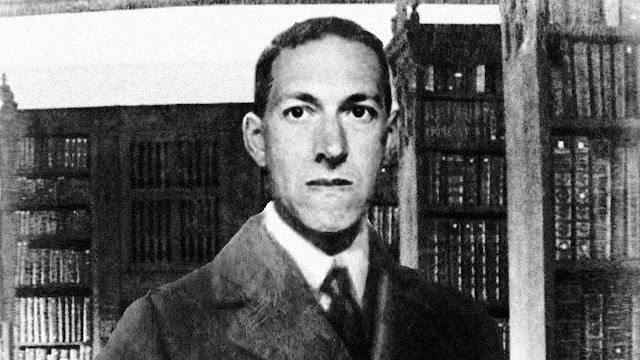 Alright, so let's get started on the list-making.  First up, I'd like to present a list of Lovecraft's fiction in chronological order by composition.  A few notes about that: (1) I'm doing it because it might be useful to somebody (me, for example); (2) it isn't as straightforward a task as it might seem, and in places where I'm straying into controversy I will explain myself as needed; and (3) due to how non-straightforward a task it is, it's entirely possible I will get something wrong, in which case I would appreciate you correcting me in the comments.
Much of the specific information will have been obtained from The H.P. Lovecraft Archive, an indispensable website that you are heartily encouraged to visit.
In the cases where I have attributed multiple authors, I am listing them as I believe they ought to be listed.  I am following my gut and listing the authors in the order of what I perceive to be the order of contribution.  If I feel the story is primarily Lovecraft, his name comes first; if I feel he had a lesser hand, his name comes second.  In some cases, I may have listed works without his name at all; those stories will have explanatory notes.

For this post, I want to explore five trade paperbacks (all from Del Rey) which more or less round out our look at Lovecraft's prose fiction.  Three of these are composed almost entirely of the same stories we covered in Part 1 of this series, but I thought the collections were worth mentioning all the same, if only because they represent a good way to track down most of Lovecraft's stories.  If you're looking to get into his work, you could do a lot worse than snap up these volumes.

I enjoyed reading that Knickerbocker Classics edition of The Complete Fiction of H.P. Lovecraft, but it's 1100 pages long, which means that it's pretty dang heavy.  One night, I had a cat in my lap while reading it, and I dozed off for a few seconds.  I worried that the book might split my poor kitty's skull open if it slipped out of my hands when I nodded off.  I'd like for my reading not to risk feline fatalities, so I suspect that future re-explorations of Lovecraft will almost certainly come via the paperbacks on today's agenda.


*****
If my first indirect exposure to H.P. Lovecraft was via Stephen King's Night Shift and its tales "Graveyard Shift" and "Jerusalem's Lot" (as I think likely) then my first direct exposure to his work was via this collection:
I hate to immediately sidestep talking about that collection directly, but I am going to sidestep it nevertheless in favor of exploring some of personal memories and recollections.  Much of it will have nothing to do with H.P. Lovecraft's work in a literal sense; it'll be me-centric, and while I do believe there's some applicability to an exploration of Lovecraft's work, that might be mere justification on my part.

Either way, I'm going to make it super-duper easy for you to skip right over all that stuff,.  See the gnarly cover art above?  That's the work of Michael Whelan, whom Dark Tower fans will know as the artist for books one and seven of that series.  Below, I've posted better versions of the two paintings which comprise his art for this Lovecraft collection, and they will serve as signposts marking our re-emergence from St. Self-Indulgenceberg.  So alls you've got to do is scroll down a bit, and you'll have vaulted right over my meanderings.

Everyone else, thanks for sticking with me.