A few months ago, I sat down with the intent of writing -- for You Only Blog Twice, my other blog -- a review of Spectre, the new James Bond movie.  I detested that movie, and what came pouring forth from my keyboard was a vitriolic mess.  I abandoned the review after working on it for an hour or so, disgusted with myself for not managing to keep better control of myself.  I wasn't wrong about what I was writing; I wasn't lying about how I felt.  But I always hope for at least some measure of restraint in such situations, and my inability to find it disappointed me.

That review remains unwritten.  At the time, I said that I was going to wait for the Blu-ray, to give the movie time to settle in my gut in the hopes that a reappraisal might find me more generously disposed.  I'll get to it eventually, too; but I can still feel that hate boiling under the surface, and I'm in no rush to stir it up again.

All of that is a way of warning you that there is almost sure to be a certain amount of vitriol in this review, too.  Not as much: in the end, I didn't hate 11.22.63 very much, if at all.  My disdain for aspects of it are of the lamentation-for-what-could-have-been variety, and not (as they were with Spectre) of the how-dare-you-fuckfaces-do-this variety.

But there is some disdain, let's have no doubts about it.  I can feel that disdain itching to get out of my brain and play on the keyboard for a while, and I'm inclined to indulge it.  Hopefully, I'll be able to keep the leash on it, but if it runs free and shits in your yard while I'm not looking, sorry 'bout that.

Much of my ranting is going to be of the big-picture variety, and is probably thus best saved for the end of this post, as a sort of summing-up-the-miniseries thing.  So first, let's get to a review of this specific episode.

I thought it was okay.  I would say I liked it at about a C+ level.  You can graduate from college with a C+, so that's not entirely awful as far as grades go.  I'd have given the previous couple of episodes something more like a C-, or maybe even a D+.  I think you can even graduate from college with a C-; maybe even a D+, for all I know.  Does that matter?  It does not.  My point is, I disliked the previous two episodes; this one was mildly better, enough so that I would say I liked it.

I was surprised by how emotionally disengaged I was during it, however.  We will talk about that more later, but if you wanted a capsule review up front, there it is: it was okay, but overall it sort of left me cold.

I took some notes and screencaps, so I think we'll just sort of follow those for a while, starting with this: 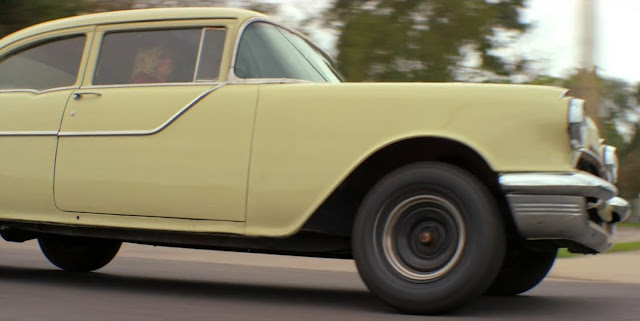 The episode begins with a car-speeding-down-the-road sequence that makes me think the second-unit director was trying to earn a bonus.  It's executed well, especially for a television series; but it's a little too vigorous, and feels out of place.  The series has had a lot of talk about "the past pushing back," and there's a good bit of that in this episode, too.  So do you expect me to believe that Jake Epping Amberson (who seems like the last guy who would be capable of Vin Dieselesque driving) can take a stolen car speeding wildly down a major road in a very large American city during the middle of the day and not have there be a serious problem?  I don't buy it.  I don't buy that Jake would be a good enough driver to make this possible.  The past seems to have fallen asleep during this sequence; it misses some major opportunities to push back.  Perhaps it was so slack-jawed with disbelief that Jake was bold enough to try this sort of gambit that it simply forgot to do anything for a while.

I'm not buying that, either.  Bottom line is that this scene is incongruous with the rest of the series.  On its own, it's fine.  In context, it's kind of awful.

By the way, I'm almost positive that Sadie is played by a stuntman in a blonde wig and lipstick.  Check that screencap and see if you agree with me.

This sequence also contained a number of examples of a type of cinematic storytelling that, once you are aware of it, you can never forget.  I say that as a way of warning you that you might not want to read the next bit.  It might ruin movies and tv for you in some ways.  If that seems like a thing you'd like to avoid, skip down to Josh Duhamel's face.