Collectioning (2017 Edition), Part 1: An Excuse to Talk About the Old Days

coll-ect-ion-ing  (kƏ lek' shƏn ing)    1.  the process of systematically adding to one's collection of a specific type or category of objects.  2.  a sign of low-grade obsessive-compulsive disorder.  3.  another reason for people in Third World countries to hate people like me.  4.  a made-up word invented by a lame blogger, who, in his defense, says "yes, but at least I didn't put a hashtag in front of it"  (See also)


You know how it is: every so often, you feel an itch in that part of your mind that governs the rules of your collecting; an itch that can only be scratched by adding to the collection.

While writing some of my recent posts, I was reminded anew of a mistake I made years ago: getting rid of my first copies of many of my King books.  See, when I first began buying King books, it was via used paperbacks; I was a haunter of used bookstores and thrift shops, and it is from those haunts -- mostly, though not exclusively, a used bookshop called The Book Rack -- that the majority of my initial collection was built.  Before high school was over, though, I'd joined the Stephen King Library, which sent me a hardback copy of a King novel once every month.  As those arrived, I traded in my old paperbacks.
It didn't seem like a mistake at the time.  Why keep 'em?  I had just gotten better copies!  I got a hardback, whatta I need a bent-up old paperback for?
What younger me wasn't counting on is that older me would grow nostalgic for those paperback editions.

Younger me had no way of knowing that older me might feel the need to have those paperbacks on his shelf ... simply have them, to look at and occasionally take down, holding them wistfully while futilely pretending that he was still that fifteen-year-old boy who walked into The Book Rack and spent hours sorting through its musty old treasures.  Would the Bryant who is typing this spend money to go onto a holodeck recreation of that shop, complete with all the books that used to be there on a semi-permanent-yet-nevertheless-rotating basis?  Not just the Kings, but the stacks of movie novelizations, the romance-novel room he literally never even went inside, the Mack Bolans and Destroyers and Leon Urises and James Micheners he never bought but was always weirdly drawn to?

You bet he would.


Such a thing is not possible, of course.  The past is forever gone, never to reappear except in elaborate recreations, and not terribly often even then.  All the money in the universe will not truly buy you What Was.

A tiny bit of me.


I have been thinking about that sort of thing a lot lately, and recently decided to devote some funds toward reacquiring as many of those old paperbacks as I could find.  Not the literal copies themselves, of course, but the editions/covers that I first owned.  Convincing stand-ins for my starter copies, in other words.
The good news for me was that, with only a couple of seeming exceptions, the specific copies I initially owned were published in huge quantities.  It's not exactly a challenge to obtain used copies, even in good condition; not only was it easy, but it was relatively cheap.
So I thought what I'd do is turn this into a show-and-tell sort of post, including scans of these covers up and maybe a few reminiscences, if such should occur to me.  Is this self-indulgent?  Yes sir.  But if I know the things I think I know, then it's the sort of self-indulgence that makes sense to folks who love books.
Oh, by the way: this saga of materialism also resulted in the purchase of quite a few editions that I did NOT have back in the day.  I tried to not go too far down that rabbit hole, and you can judge the success/failure of that attempt for yourself.  (Spoiler alert: I failed, fairly hardcore; so much so that I've ended up splitting the post in two.)
To give these shenanigans a structure of some sort, I'm going to go in chronological order by edition, to the extent figuring out such a chronology is possible.  That can be tricky with paperbacks, which generally do not offer a year of publication apart from the year of the original mass-market edition.  But I think we'll be able to make do relatively well. 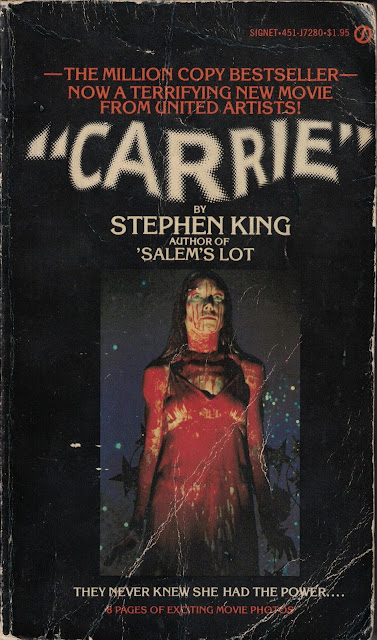 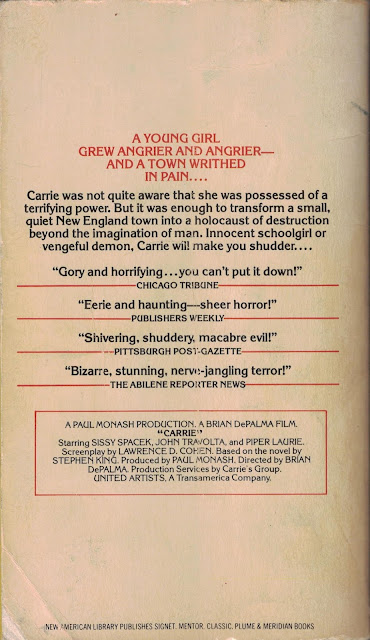 Apologies for violating the thesis of this post right off the bat, but I've got a confession to make: I did not own this edition of Carrie when I was a teenager, or at any point since.  Regardless, this specific edition looms very large indeed in the history of my Stephen King fandom, so it seemed (A) like I ought to get a copy and (B) like a good place for this post to begin.

A Brief Review of Episode 1 of "The Mist"

I will not be reviewing the ten-episode miniseries based on The Mist.  I apologize for any of you that may disappoint, but I decided after my experience with Under the Dome that I am oil and reviewing weekly television is water; we simply don't mix.
However, I feel obliged to at least off a few words about the pilot episode.
I'll begin with these words: I hope it gets better. 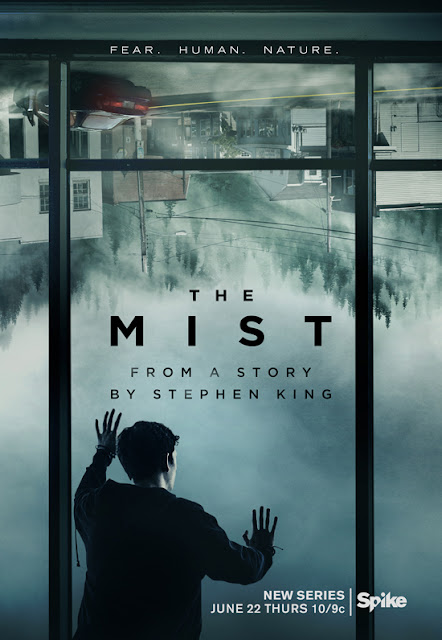 Yes, I surely do.  Because this premiere episode is pretty mediocre.  Not awful; there are going to be people calling it awful, but I can't roll with that, because I've seen Beyond Westworld, and know what awful is.  THIS is mediocre, which is another thing altogether.
Read more »
by Bryant Burnette at 5:49 AM 26 comments: