My Friend vs. Cancer

Today, I want to put an opportunity in front of you.  It's not a fortune-and-glory type of opportunity (he said, channeling Temple of Doom for some reason), but instead an opportunity to help somebody who needs some help.
My friend Trey Sterling -- you see him in the comments under the name "Xann Black" every so often -- recently underwent surgery to remove a malignant melanoma.  The surgery was a success, and while there is still a course of treatment(s) waiting on him, Trey's progress seems to be quite good.  This is because he's a badass.  However, the illness and (more importantly) recovery time have caused him to have to face an extended period away from work.  And I don't care how big a badass you are, bills are badder if they've teamed up with cancer to stop you from going to work for an extended period of time.
So here's the opportunity: to help.  If you're reading this and have a few bucks you don't think you'll need this week, kindly visit Trey's Go Fund Me page and donate to this worthy cause.
Let me tell you a little bit about Trey.  I've known him since ... oh, 2003ish.  He was in high school, and got hired to work at the place where I was a manager.  We got to be friendly, as often happens when nerds meet each other; and have been friends ever since.  We've been on vacations together a few times over the years, have watched all manner of movies and TV shows together, and have had major influences on each others' reading habits.
With that in mind, if you've got the ability to send a few dollars, I'd like to ask you to consider sending them his way.  He's a good guy, and his parents are good people, and the rest of his family are good people, and their various dogs and cats are good animals.  They, none of 'em, ought to have to be going through any of this.

Now, for your amusement, here is a photo of Trey murdering a dinner roll at Disney World:

A Review of "Dollar Deal" (by Shawn S. Lealos)

Today, I'll be reviewing the 2015 book Dollar Deal, which is a collection of interviews by author Shawn S. Lealos with various Dollar Baby filmmakers.
What's a Dollar Baby? you might ask.  That's an easy enough question to answer.  See, Stephen King has had this program since at least the eighties in which he will grant aspiring filmmakers the rights to make a short film based on one of his stories for a single dollar.  There's more to it than that (e.g., the filmmakers are not allowed to profit off the films or show them outside of festivals), but that's the gist of the thing.
I've always been reluctant to integrate fandom for the Dollar Baby films into my King-fandom regimen.  There are several reasons for this, including:

1.  I don’t consider them to be professional films.
2.  There are a LOT of them, and keeping track of them seems to be a near impossibility.
3.  I have no access to more than a handful of them.
4.  My perception of them is that the vast majority suck the root.  Not sayin’ that’s a stone-cold truism … just sayin’ that that’s my perception.
All those things being the case, why bother?
Well, that’s easy: because regardless of how I think or feel about them, and regardless of whether I have any ability to actually view them, these ARE King-sanctioned films.  In that way, an argument could be made that they are just as legitimate as, say, Cujo.  And I aim for comprehensivity in my King fandom, meaning that in a perfect world, I’d be able to collect every one of these things and give ‘em a look.

Not being able to do so, it is my preference to turn something of a blind eye toward them.  Out of sight, out of mind, and if they are out of my thoughts, then I don’t have to worry about not being able to see them.

Yeah, I get it; dude sounds nuts, you’re thinking.  Who told you to think that?!?  Was it the Tall Whites?!?  Er…  Anyways, don’t misunderstand me; I don’t lose sleep thinking about not being able to see Dollar Baby films.
Bottom line is: I just don't care about these movies.
So it’s a credit to Shawn S. Lealos (and the filmmakers profiled in his book) that while reading Dollar Deal, I did care. 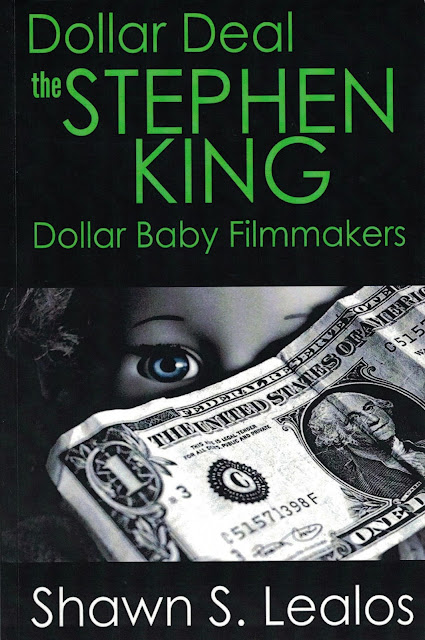 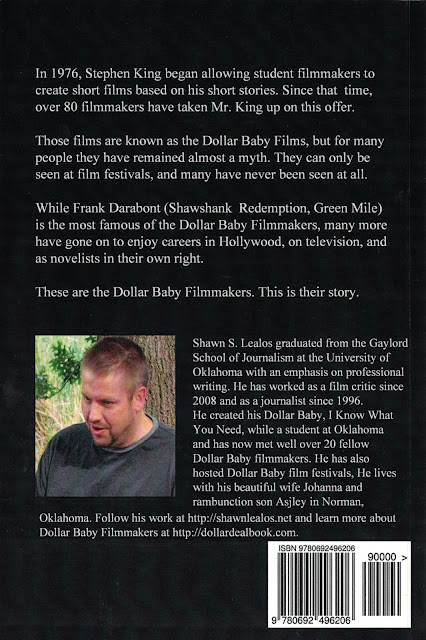 His book is not a definitive history of Dollar Babies – as I mentioned earlier, there doesn’t seem to be a way to actually compile a comprehensive list of them – but is instead a collection of interviews with seventeen filmmakers who have participated in the program (plus three essays).  During the course of reading these interviews, I became interested in the films under discussion, and in the filmmakers who worked on them.  By definition, these were films made out of a combination of sheer love and sheer determination, and the can-do attitudes that are the hallmark of a combination like that are, at times, infectious.  Many of these folks have gone on to have solid careers.  None are Frank Darabont, but few people in all of human history have been Frank Darabont, so let’s not hold that against them.  In several cases, they’ve become industry professionals, and that’s a solid outcome.
The book’s subjects are as follows:

This two-part post (part one of which can be found here) began with a spate of reacquisitions of paperbacks I'd once owned; pure nostlagia-bait mid-life-crisis stuff.  But, as is often the case, I couldn't make myself stop there, and some other stuff ended up getting collectioned in the process.
As such, this post must needs now transition into a relatively simple cataloguing of Shit I Just Bought.  Hopefully some of that will still be of interest!  I think there's some cool stuff here, so maybe you will, too.

Before we get to that, I wanted to share a few photos from my apartment.  I mentioned last time that I'd decided to devote an entire bookcase to my mass-market King paperbacks.  I moved stuff around so as to make space for it, and here is the result: 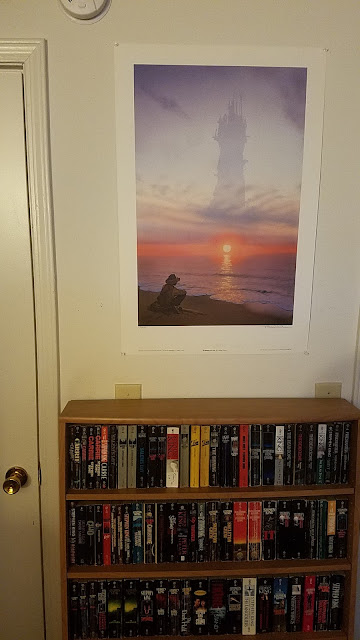 Ahhh, who needs those lightswitches anyways?  I can still kinda reach 'em.

I really ought to have that Michael Whelan Gunslinger print in a frame, shouldn't I?  I keep saying I'm going to do that. 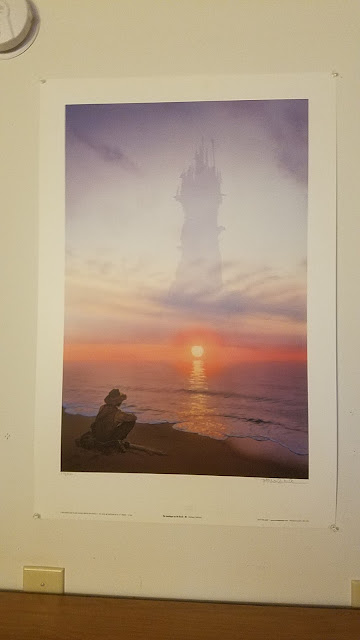 It's one of my favorite pieces of King art, and I bought the print at Dragon*Con over a decade ago.  Or did I opt not to buy it there and end up ordering a copy from Whelan's website?  Might be the latter.  I think probably so.

Anyways, it's been hanging on one spot in my apartment ever since, and I took it down to move it here so as to give this little section a theme.  As I moved it, I noticed something I'd failed to ever notice before, and it gave me a thrill: 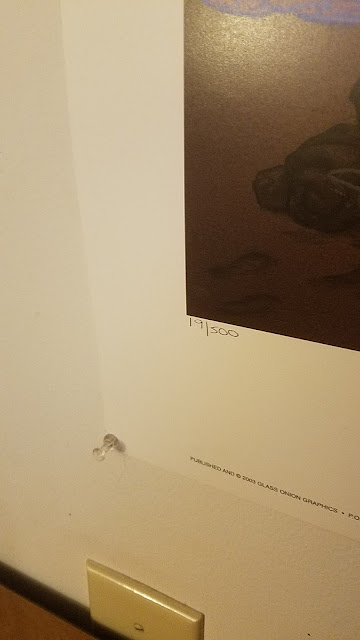 And I don't have it in a frame!  Saints preserve us.  Anyways, let's move on to the books.

We'll continue to proceed in chronological order by edition, to the extent that is possible, beginning with: 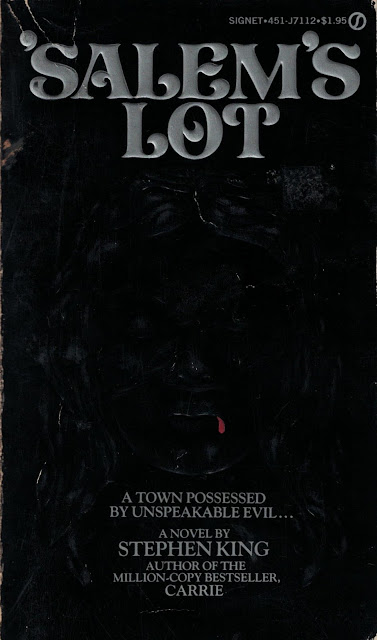 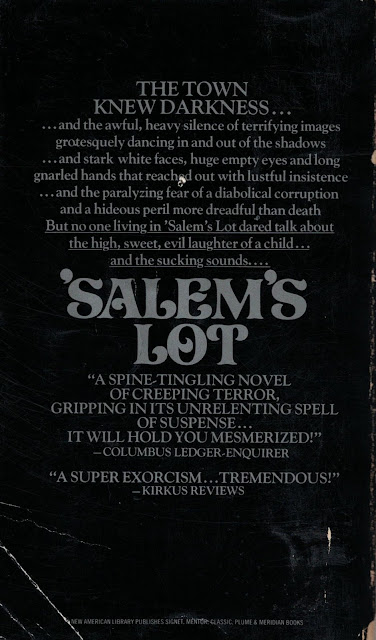 This is more or less the original paperback of 'salem's Lot, which is pretty easy to find copies of.

The scan doesn't show the cover off particularly well; the hair and facial features of the vampire are raised (you can see the indentations on the inside front cover), and catch the light in an interesting way; so while it looks in photos like a nearly-blank black image, it's actually quite a bit cooler than that, especially with that single drop of blood added in.