We pick up in one of my favorite years of them all: 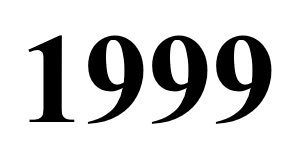 Not for Stephen King stuff, per se; I just liked that year in general.  Lots of personal mythology of mine that year.  Plus, a fucking KILLER year for movies.
Regarding King, we begin with...
The Lost Work of Stephen King
(by Stephen J. Spignesi) 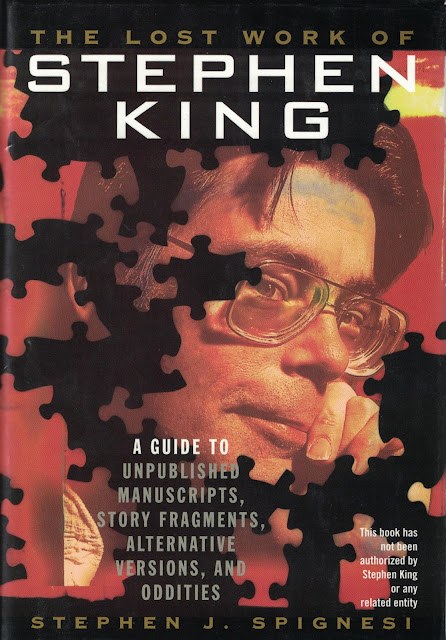 I don't know whether there had been a book about rare King stories prior to this one in 1999; it wouldn't surprise me if there had been.  However, if there was, I am unaware of it; and even if there was a similar book that preceded this one, I doubt it was as good as Spignesi's The Lost Work of Stephen King.  It's a bit over 350 pages, which makes it the length of a decent-size novel, and when I read it for the first time it was with the rapt attention I usually give a King novel.

Check out the back cover: 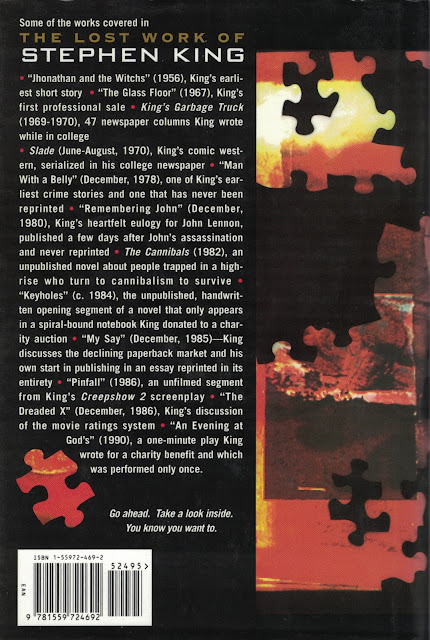 I don't know how a non-casual King fan circa 1999 could possibly fail to be fascinated by that.  I'd heard of some of the contents covered within the book -- such as The Cannibals -- but was unfamiliar with most of what Spignesi covers here.  He does so in thorough, passionate, and entertaining fashion, and for my tastes, this is handily one of THE all-time great books about King's work.  It's been rendered semi-obsolete by later works on the same topic by Rocky Wood, but in no way should that diminish one's love for and appreciation of Spignesi's work.

Email ThisBlogThis!Share to TwitterShare to FacebookShare to Pinterest
Labels: Asylum, Rose Red, Storm of the Century, The Dark Tower, The Green Mile, The Plant, The Rock Bottom Remainders 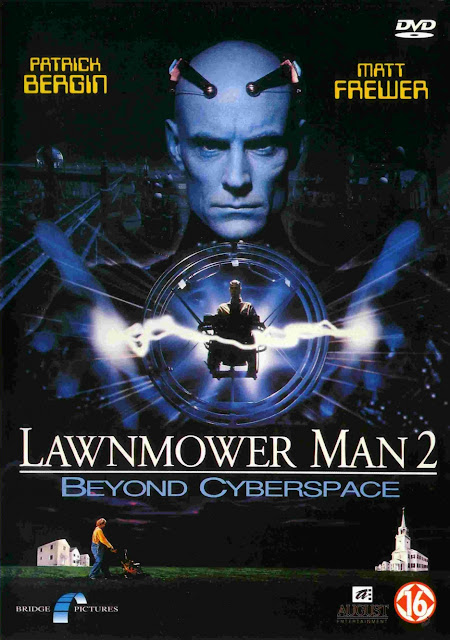 As far as chintzy King-"based" cash-grabs go, Beyond Cyberspace must surely take a prize of some sort.  It's a fauxquel to an adapfaketion, which is surely a next-level brand of poop.
Naturally, it's an awful film.  I mean, good lord, they couldn't even get Jeff Fahey back; so they ended up with Matt Frewer!  Jeez.

Email ThisBlogThis!Share to TwitterShare to FacebookShare to Pinterest
Labels: Bag of Bones, Chinga, Clive Barker, Desperation, Six Stories, Tales from the Darkside, The General, The Green Mile, The Night Flier, The Regulators, The Shining

A Guided Tour of the Kingdom: A Chronological Walk Through the Career of Stephen King, Part 9 (1992-1995)

We broke off the last leg of our tour with the end of 1991, which brought Needful Things and the "end" of Castle Rock.  I said then that the implication of that novel was that King's career was going in some other direction.
As we begin marching through 1992 and into the future, we'll see what that direction held.

"You Know they Got a Hell of a Band"
(short story)

I bought this book when it came out, presumably using Christmas money, and presumably still high on having read The Waste Lands over winter break.  Perhaps this explains why I felt the story was a letdown, an opinion I have since reversed entirely.
It's a stupendously weird concept: a bickering husband and wife get lost on a cross-country drive and end up in a town called Rock And Roll Heaven, where, gosh, everyone sure does look like dead rock stars.  There's Joplin, and there's Morrison, and ... well, the King himself must be around somewhere, mustn't he?

Email ThisBlogThis!Share to TwitterShare to FacebookShare to Pinterest
Labels: Dolores Claiborne, Gerald's Game, Insomnia, Needful Things, Nightmares and Dreamscapes, The Dark Half, The Langoliers, The Lawnmower Man, The Rock Bottom Remainders, The Shawshank Redemption, The Stand

A Guided Tour of the Kingdom: A Chronological Walk Through the Career of Stephen King, Part 8 (1986-1991)

I yawwwwwwwwwwnnnnnnnnnn didn't get enough sleep last night, did you?  Hoo-whee!  That leg of our tour yesterday was a doozy!  Glad to see you all on the bus again this morning, though.  You look like your mothers had a hard time getting you ready for school and you are pissed at her for succeeding, but otherwise, you look wonderful!  Just the kind of folks I like to spend a morning with.
Now, if you'll look to your left, our first stop for the day brings us back to the year 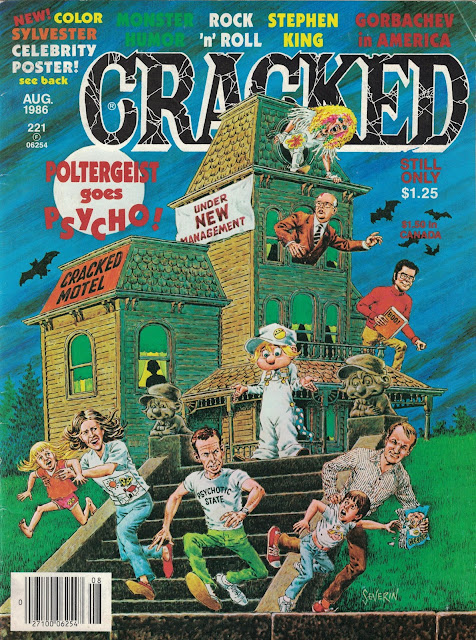 We begin 1986 in ignominious fashion, with an almost-entirely-unfunny piece that ran in Cracked.

For those of you who don't know, Cracked was basically the RC Cola to Mad's Coca-Cola in that it was what you settled for if you couldn't get the genuine article.  Or at least, this was the case when I was a kid.  For whatever reason, though, I always tended to prefer Cracked to Mad.  (I also had a serious RC Cola phase, FYI.)  I only had a handful of issues of either one, but if I was reading one in a store, it was typically Cracked that I gravitated to first.

I dunno, man ... maybe it was better once upon a time than this issue's contents would seem to indicate.  All I know for sure is, I'm glad I didn't pay much more than cover price in the obtaining of this issue.  (The things I do for this blog do not always do me credit.)  I do kind of dig the John Severin cover, but as for the actual "interview" itself...?

Well, let's have a look.  Cracked doesn't exist anymore, so I don't think they can sue me, and anyways, fair use:

A Guided Tour of the Kingdom: A Chronological Walk Through the Career of Stephen King, Part 7 (1982-1986)

Welcome, tourists!  I hope the heat on this bus is working well enough for you; I'll drive slow, so you can work on that coffee I know you've got warming your hands.

We'll get today's tour underway without any further preamble; this fucker is an epic, so we've got plenty to see.  As we begin, we are still in the the good old year of: 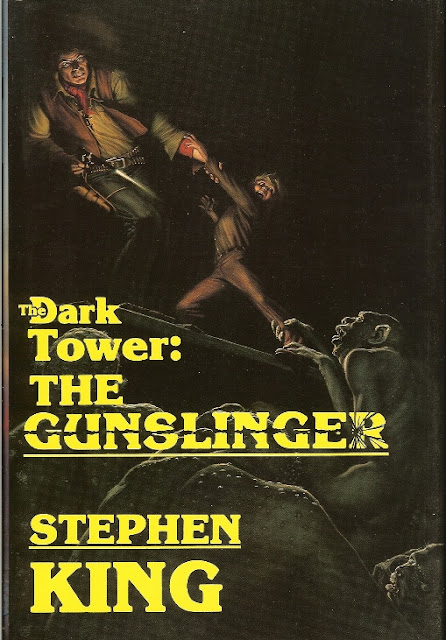 In structuring the posts that comprise this tour, I've tried to split them along fault-lines of sorts; by this, I mean that I've tried to find places where King's career shifted in some greater or lesser way, and use those moments of change as jumping-off points for a new "era."  I think I accomplished this relatively well; no achievement on my part, to be honest -- mostly, the fault lines suggested themselves.
One of these was the summer of 1982, when the first collected edition of The Gunslinger was released.  The individual stories contained herein went back as far as 1978, of course; but in terms of books themselves, this Donald M. Grant edition of The Gunslinger was where The Dark Tower was born.
Most King fans had no clue it had happened.  This would not change until the release of Pet Sematary the following year.  (Click that link and Bev Vincent will tell you about it.)
Read more »
by Bryant Burnette at 2:08 AM 24 comments:

What I Watched This October, Part 3: The Final Chapter's Revenge Strikes Back ... Again!

Up to this point, I've largely been talking about movies I'd already seen.  A few exceptions have snuck in -- Gerald's Game, Fender Bender, 1922 -- but mostly, I've been revisiting rather than exploring.

We've now reached the point at which I'm going to try to knock a bunch of things off my list that I've never seen.  Mostly (relatively) new horror films, which I am woefully behind on.

I begin that process by visiting an old friend of the Stephen King film universe, Mark Pavia. 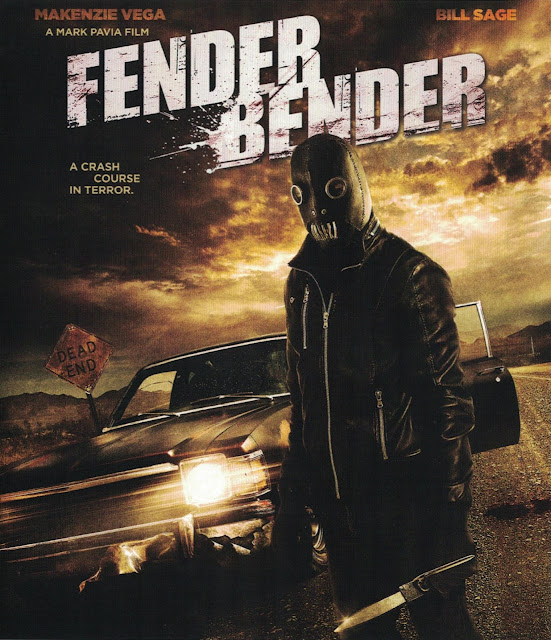 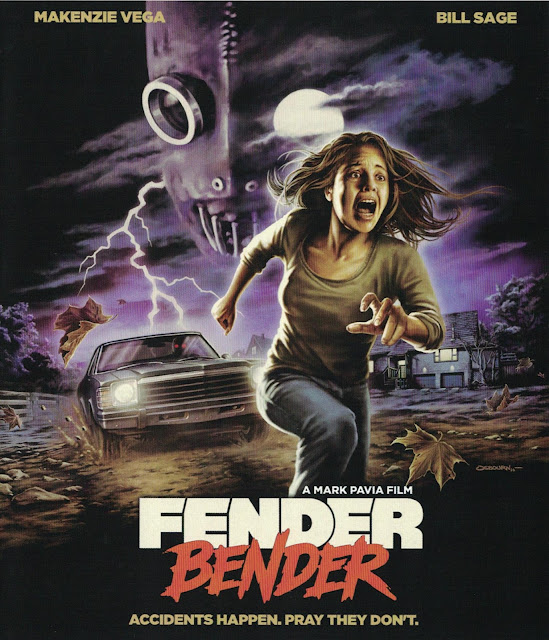 You may know the name Mark Pavia from the 1997 King adaptation The Night Flier, which is probably my pick for most underrated King movie.

It doesn't show from Fender Bender, which I loved.