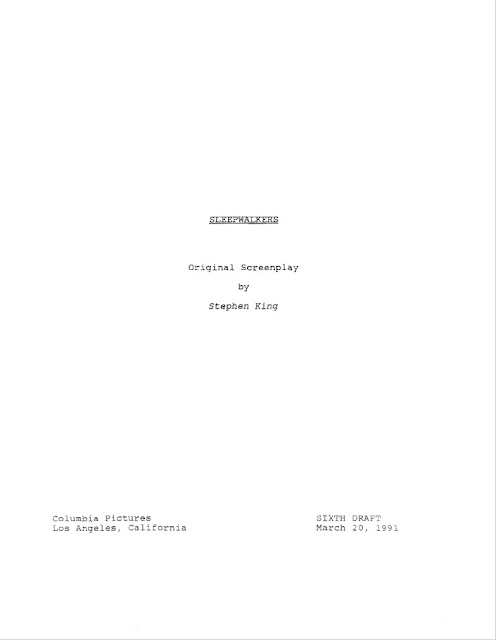 Not technically a book, but I'm counting it, because it's book-length and I did, in fact, read it during 2018.
I wrote about it at considerable length here.  The short version: it's a readable screenplay that is kind of cheesy and nonsensical, but is nevertheless worth the time of any serious King fan.  It's mostly the same thing as what you seen if you've seen Sleepwalkers, but there are a few significant differences, including a very different ending.
Date of completion: March 6
Grade:  B-
The Listener by Robert McCammon 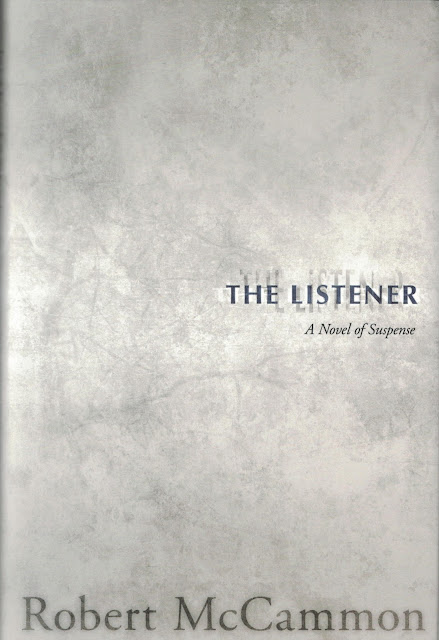 I wrote about Robert McCammon's new novel The Listener here, and not in any spoilery detail.
It's about a kidnapping, a telepath, and my determination never to go to a swamp.  It's quite possibly one of the best books McCammon has ever written, and that's high praise.

Here is a partial list of the films Danny Elfman had scored by the time he accepted the job on Dolores Claiborne:

What you've mostly got there is a list of colorful/moody fantasy films of one type or another.  Most of what's left is comedy; some are both.  I would argue that a minimum of five are stone-cold classics of film scoring.

I'm not sure you'd be able to argue that a filmography like what Elfman had at the time would make one an inherently good choice for a film like Dolores Claiborne, which is neither a comedy (and how) nor a colorful fantasy film.  It's a psychological drama with expressive elements; and that's not true of, say, Dick Tracy.

However, Elfman had been working up to make a transition of this nature.  He'd scored the underrated Jodie Foster / Richard Gere drama Sommersby in 1993, and had done a good job of putting himself in supporting mode; many of his previous scores had (and this is in no way a sleight of his phenomenal work) been much more front-and-center.  That sort of approach can work for dramas -- Taxi Driver, anyone? (I'd answer "yes" if I were you) -- but most directors opt not to go quite that expressive with the music.

Case in point: Dolores Claiborne, which has virtually nothing in the way of hummable themes.  One thing you could NOT accuse Elfman of is being deficient in the hummable-themes department in the course of scoring those films listed above.

Of course, this in no way implies that Dolores Claiborne lacks impact or is deficient.  It's impactful and really rather terrific; just not in the way Beetlejuice is, you know?  And I think it's worth going on a bit of a deep dive here, and closely examining the role the music plays in the movie.  So what I'm going to do is this: I'm going to rewatch the movie, and take notes on each and every scene in which Elfman's score appears, and then pass my thoughts about it along to you.  After I'm finished, I'd then like to compare that to the soundtrack album (which, like most score albums, contains only some of the music Elfman wrote and recorded).

I might be about to test the patience of some of my readers, but I think it might be a useful experience for me personally to go on a brief tour of Elfman's career as I understood it around the time of Dolores Claiborne's release.  There's no better way of doing that than going track by track through the contents of this album: 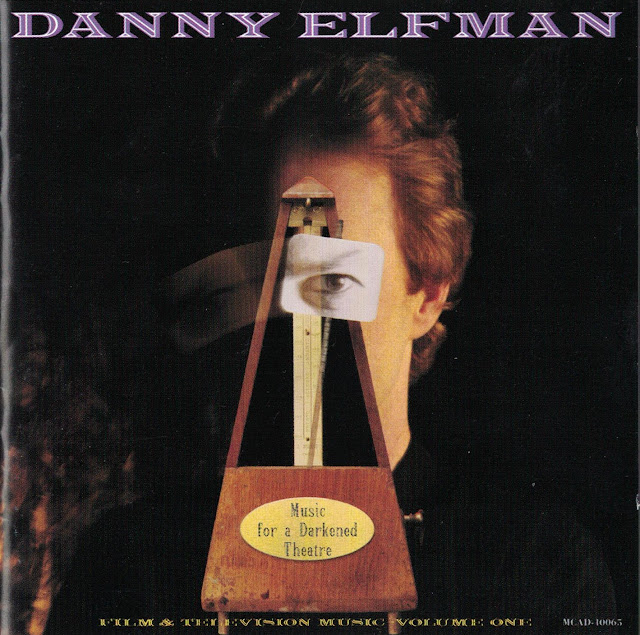 This is Music For A Darkened Theatre: Film & Television Music Volume One, which for my money is one of the great film-composer compilations of all.  It might well also be one of the most-played CDs in my library; I got this sucker when it came out in 1990, and it got featured heavily in my rotation.  (Technically, my first copy was on cassette, but let's not be pedantic, shall we?)

As you may know, I am a Stephen King fan.
This surprises you?  Feign surprise all you want, but it is merest truth.  The truth inside the lie, one might say.
Or one might not say such a lame thing as that, but evidently that was how my brain wanted to begin this post.  Fuck it, let's regroup.
Point is, AS a Stephen King fan, I'm kind of used to being able to indulge my fandom.  King puts out a new book or story, I buy it and read it.  A new movie comes out?  I go see it.  A new television series comes on?  I watch it.  A new comic book comes out?  I get one.
Generally speaking, I am able to keep up with all but the most ephemeral such bits of King-dom.  And that suits me just fine.
But every once in a while, something comes along that scoots right past my defenses and escapes from me.  One such instance came in 2013, when the San Francisco Opera staged Dolores Claiborne, an opera by composer Tobias Picker based on the novel (and movie) of the same name(s).

I'd happily have attended a performance if I could have done so, but it was not vaguely feasible.
To date, there has been no commercial video or audio release of any kind.  No bootlegs exist that I am aware of; no performances (apart from a highlight reel, more on which in a bit) exist on YouTube.  For all practical purposes, the opera just plain doesn't exist for this King fan and blogger.
And this vexes me.  Yes, it vexes me mightily.
That said, I thought it made sense to go ahead and pound out a post on the subject while I was in Dolores Claiborne mode (having recently covered both the novel and the movie).  I can't review what I can't see/hear, but I can compile all the interesting information about it I can find, and if nothing else serve as a sort of repository for information about the opera.
If you're game, follow along, and let's see if we turn up anything interesting.
Read more »
by Bryant Burnette at 12:29 AM 10 comments:

Today, it's movie-review time, and we're threading the 1995 Warner Bros. adaptation of Dolores Claiborne through the handy-dandy Truth Inside The Lie projector.
Confession: the foregoing sentence is an example of the kind of bullshit you write when you can't quiiiiiiite figure out how to begin a blog post but are determined to begin it nevertheless.  Vamping ain't just for podcasts! 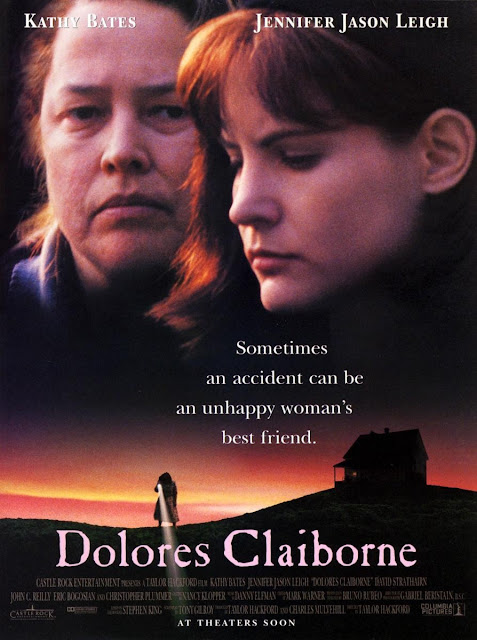 One thing I always struggle with when writing these reviews is a question: should I primarily think of them as a thing separate from the novels/stories upon which they are based, or should I instead think of them as a reflection of that source material and judge them accordingly?
It's a difficult question to answer in some cases, but I'm being somewhat disingenuous in having even posed it, because I've got my answer all lined up, and have had it for many a year now: I do whatever I feel like doing at the time I'm doing it.  So do I sometimes feel perfectly content to consider the movies as their own thing?  You bet I do.  Do I at other times feel like either praising or (this is more common) cursing the movie for the degree to which it hews to its source material?  Oh, for sure.
And there are still other times where I seem to take a hybrid approach, feeling both things simultaneously.
It's a case-by-case thing with me, and if that strikes you as being wishy-washy or flip-floppy or just plain old hypocritical, well, you don't need my permission to be thus struck, so go on ahead.  I'd only point out that this adaptation game is a tricky one; there are no rules, only a shifting maze of approaches that may or may not lead you to the end goal that is "success."
On the whole, I think I'm pretty consistent in my own approach to appraising this stuff: I just want to see something good.  Great would be even better, and okay'll do in a pinch; but give me something good, and I'll not only roll with you, but I'll ride shotgun and keep an eye out for bandits.
No point in burying the lede any further: I think this is an awfully good movie.  It might even get close to being a great one; I said I thought more or less that the last time I ranked all the King movies (this one came in at #10).
Read more »
by Bryant Burnette at 2:21 AM 15 comments: