The Clearing at the End of the Path; or, Why Stephen King?

A single word hangs like a pall over this post; over my entire life, maybe.  The word is "why," a short word with a very long meaning.
I've got a middle-aged man's half-lifetime's inventory of "why"s, stacked up like yellowed newspapers in an abandoned house.  In writing this post I am going to try not to stagger drunkenly into those stacks of whys, knocking them over and sending plumes of musty dust billowing into the air.  If I fail in that aim, I'd recommend not breathing that dust in; I'm not sure it's particularly healthy.
We're on the porch of that house now.  Hear the floorboards as they creak?  I don't know that you should follow me in.  It's safe enough, but it's honestly kind of gross and upsetting, and part of me wants to just go in all by my lonesome; see, I'd kind of like to just knock all those whys over and do away with the pretense of letting them stand.
But that defeats the purpose of this post.  We -- or so I'm claiming -- only want to go inside and grab a couple of the newspapers from those stacks; one of them is lamentably recent, so it'll be no challenge to get at.  The other is older; we've got to further in to get to it, but I know from previous visits that it's right on the top of a stack, easy to reach, easy to grab.
The temptation comes from everything around it, the whys at the bottom of stacks which are in the corners of rooms buried behind other stacks.  Only a nutso would even TRY to get to those, because there's no way to do so cleanly.  And yet, I'd like to get to them; yes indeed, I surely would.
What I'm saying is this: we're here to answer the question "Why Stephen King?" but I've brought us here on somewhat false pretenses, so we're also going to try to answer the unanswerable question of "Why Trey Sterling?" at the same time.  And what I'm really saying is this: I wonder if I'm strong enough to withstand a trip into this house that lasts long enough to visit two different rooms.  There's a danger of getting lost, and if I can drop my silly metaphor of houses and newspapers, what I'm REALLY saying is this: I hope I won't end up talking about too much bullshit nobody reading this blog would possibly give a damn about.  All those whys, they are not your concern; you've likely got your own house full of 'em, and hardly need a visit to see somebody else's.
So I'm going to try to not do that.  But I worry.
The worrying has ended for my friend Trey Sterling, who spent a year worrying about the lymphoma that had invaded his body, and then surrendered to it on June 22, just a few weeks shy of his 32nd birthday.

He spent his final weeks floating in and out of consciousness, and the extent to which he was able to actually understand and process the things happening around him is a bit of an unknown.  There were moments of lucidity; they were not entirely pleasant, I am led to believe.  I only saw him on a few occasions during this time, and from my perspective, "Trey" (meaning the qualities that made Trey himself) was almost entirely absent.  There were flashes of him there; he was not entirely gone.  But to the extent he was present, he was diminished; not gone, no (the sense of devil-may-care humor shone through at times), but absolutely diminished.
Why?
Why would a thing like this be possible?  An inane question to ask, and not one that I actually expect to be answered.  This "why" is less a question than it is an accusation; it is a gob of spit hocked onto the ground at the feet of an indifferent universe, a "fuck you" in a question's clothing.  The universe that would do a thing like this to a Trey Sterling is a universe that needs to be told to get bent. 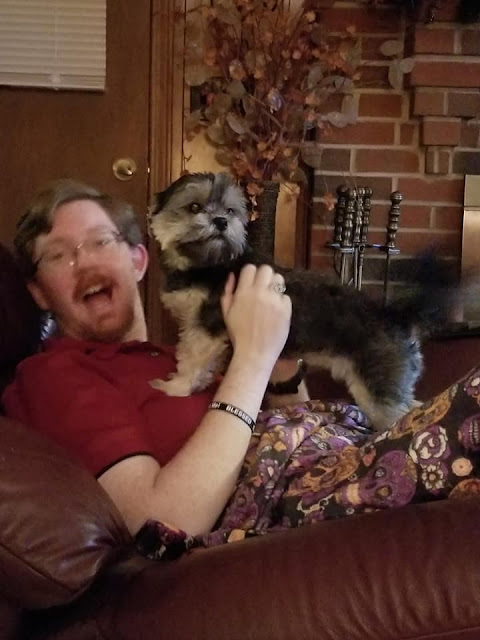 Of course, the joke will be on me for that act of defiance; the universe's response will be to rise out of the ocean someday (perhaps tomorrow!) and run amok, prompting hysterical madness in all who glimpse it.  I mean, fuck that universe in the nose all the same; but it's gonna get me one of these days, and it's gonna get you one of these days, too, and whether our fates are more benign than Trey's or shockingly less benign is utterly beyond our control.
We're going to walk on from that, and as we do, allow me to mention that Trey's death put me in mind of The Dark Tower.
That might seem like a trifling thing to be reminded of.  It's not.  That series of books is how Trey and I became friends in the first place; it's baked right into the DNA of our friendship, and so while it might seem to some trivial and even crass for me to use that as a way into memorializing him, it doesn't strike me as the least bit odd.  Wouldn't have struck Trey that way, either.
But it's worth asking: why?

Email ThisBlogThis!Share to TwitterShare to FacebookShare to Pinterest
Labels: Aliens, Cowboy Bebop, Disney World, H.P. Lovecraft, J.R.R. Tolkien, Predator, Skeleton Crew, The Dark Tower, The Gunslinger, The Reach, The Return of the King, The Stand, Under the Dome, Wolves of the Calla

A Look at "The Search For Castle Rock"

Last week, Hulu released a brief (23ish minutes) documentary called The Search For Castle Rock.  I decided to write a little summary of it as part of Part 16 of my Guided Tour Of The Kingdom series of posts (which you'll see at some in the future).  I ended up writing a little bit more about it than I'd planned, and thought that it might not be a bad idea to go ahead and just toss it up here, if only so as to provoke some Castle Rock conversation.
Confession: while I will absolutely be watching that series on Hulu when it starts later this week, I have no plans whatsoever of writing about it here.  Also, I'm not as sold on the idea as many King fans seem to be.  I'll get into some of my reasons for that below.
Though I'll not be writing anything about the show on a weekly basis, I'd be more than happy to discuss it in the comments section for this post; so there's another reason for the post's existence, potentially.
***** 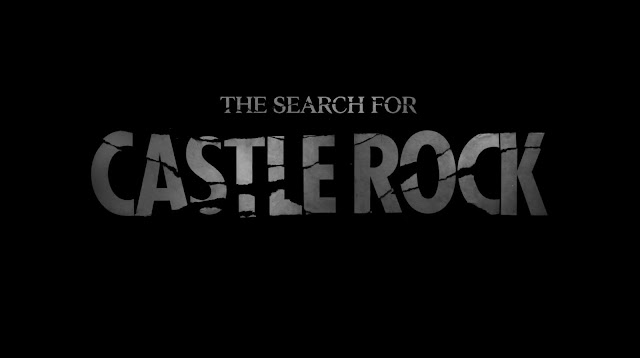 This twenty-three-minute documentary short is essentially just a promotional piece for Castle Rock, the Hulu original series from producer J.J. Abrams.  I wouldn't normally cover that sort of thing here, but this is an interesting and very professionally-produced documentary, plus, hey, I got no real reason not to.
"Haunted places have long been a staple in Stephen King's writing," says a narrator at the beginning.  "That's because the locations that inspired his writing have dark histories themselves."
Right here, you get a sense of what this documentary -- and perhaps the broader scope of Castle Rock itself -- may be trying to accomplish: this is myth-building, in which Stephen King is being turned from a man into a myth.  What we are glimpsing is a bit of what seems likely to happen once King has reached the clearing at the end of the path and is no longer among the living: the shadow's ability to persist once the body itself has vanished.
I suppose this was always inevitable.  And it's probably preferable, right?  I mean, it's happened before.  Mark Twain, Ernest Hemingway, H.P. Lovecraft, William Shakespeare, Emily Dickens, so forth and so on; all exist in our minds at least as much on a mythical realm as on a literal one.  This happens with rock stars, too, and probably with anyone famous whose fame has any reason to outlive their bodies.
And yet, I have to confess to feeling a little grumpy about it.  I mean, can't this wait until King is dead?  Dude is still building his own myth; two books a year, most years.  There's no reason on Earth he can't live and write and publish well into his nineties, so there may be entire chapters of that life yet to be written; maybe the myth-making can slow its roll.
Read more »
by Bryant Burnette at 2:30 AM 27 comments:

Believing is feeling.
*****
Tonight, I watched Gerald's Game for only the second time, and I am pleased to report that I enjoyed it just as much on revisit as I did when it first began streaming last September. 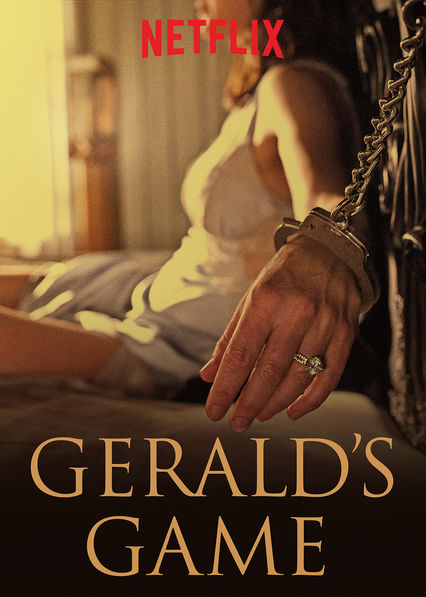 Having recently reread (and blogged about) the novel, I was a little worried that King's version might be too much in my brain for me to let go and enjoy Mike Flanagan's adaptation.  I needn't have worried; this is top-notch stuff, an instant classic that has, I think, already joined the ranks of agreed-upon King classics.
If such a thing even exists anymore.  I think it still does, but our culture, popular and otherwise, seems to be in the midst of a series of profound shifts in how we view it and ourselves, and in the face of that only a fool speaks of things being commonly agreed upon.  Granted, I kind of am a fool; so there's that.  Still, I've retained enough self-awareness to know that whereas one probably could speak about "agreed-upon" things in 1988, or 1998, or maybe even 2008, the ability to do so in 2018 is increasingly meaningless.  We agree on virtually nothing these days.  We don't even agree upon what we disagree about.
That's not lost on me, is what I'm saying.
Still, to the extent such a thing as consensus exists, the consensus among people who care about movies based on the work of Stephen King seems to be that Mike Flanagan's Gerald's Game is a big-time winner.
How did this happen?  For decades, that novel was considered to be damn near unfilmable.  Flanagan's movie works so well, though, that one wonders what all the fuss was ever about.  "Oh," one might say watching it; "fuck, that was simple."  I'm sure it was anything but, but it does play somewhat effortlessly, and that's a bit of a marvel.
Let's see if we can celebrate it a bit.
*****
The key initial decisions Flanagan seems to have made are these: (1) deciding that the novel itself fundamentally works from beginning to end; and (2) deciding that despite that, not every aspect of it was a slam-dunk for adaptation into an audiovisual format.  From there, along with co-screenwriter Jeff Howard (to whom I apologize in advance for the many times I'm going to simply refer to Flanagan as the auteur of this adaptation -- I do know it's not the case, and regret the shorthand), he seems to have decided to keep as much of the novel as possible without losing sight of the fact that in order for it to work as a cohesive whole, things would have to be sacrificed.