There Are Dark Stars Near Arcturus: An Overview of Stephen King's Juvenilia, 1956-1966

When I undertook my series A Guided Tour Of The Kingdom, one of my primary motivations behind doing so was to establish for myself a sort of checklist to use for the many King-related works I'd like to blog about someday.  My hope was to begin putting checks in those boxes, by which I mean blogging about the things I've not blogged about.
I'm hoping to begin actually putting some checks in boxes on a regular basis, and I thought maybe the best way to get that ball rolling might be to begin at the beginning.  In this case what that means is looking at some of King's early amateur writings (a.k.a. juvenilia).  However, in no way do I feel like that work merits the same type of attention as, say, The Shining; so while I thought it made sense to cover it all, I thought it made a lot less sense to devote an entire post to each story.  This is especially true given how difficult most of these are for the average person to actually find and read.
So, a compromise: a roundup post.  We'll cover everything that I know of to be at least marginally available, which is by no means everything; for example, I won't be covering the fabled "novelization" of The Pit and the Pendulum that King wrote, because nobody has ever read it (or at least, nobody has ever reported on it).  Sames goes for a satirical piece he wrote in high school called "The Village Vomit."  If and when additional pieces make their way into the public view, I'll update this piece accordingly.

Let's get cracking, beginning with:
"Jhonathan and the Witchs"
(written circa 1956; published in First Words, 1993) 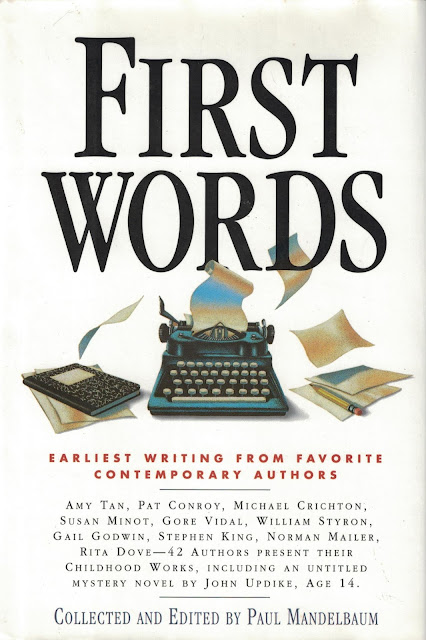 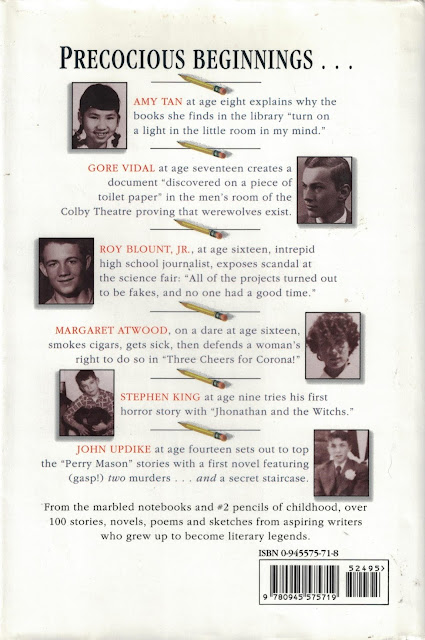 I'd intended to use this post as an excuse to read the entirety of First Words, but when I picked the book up and actually contemplated doing it -- it's 502 pages (in hardback; the abridged trade paperback clocks in at a more-than-halved 241 pages) -- I realized that most of it would probably be something less than rewarding.  I kind of feel bad about that, but does 14-year-old John Updike really care what some fat bastard in Alabama reads and doesn't?  I'm guessing not.  And this fat Alabamian bastard kind of doesn't care what young John Updike wrote.
He cares about what young Steve King wrote, though, so we are going to skip straight to "Jhonathan and the Witchs." King wrote it at a mere nine years of age, and it's loads better than most nine-year-olds would manage.
Here's a plot summary I wrote: