You must remember this: a kiss is just a kiss.
You must also remember this: in 1988, when Halloween IV: The Return of Michael Myers was released, the Halloween series was dead.  It had given rise to an entire decade's worth of imitators, and imitations of those imitators.  And other characters had sprung up to fill the void left by by the departure of Michael Myers into the void.  Jason and Freddy, to name a couple.
Eventually, the producers who owned the rights to the Halloween movies and the Michael Myers character decided enough was enough.  Why were they leaving all that money on the table?  There were people out there who loved Michael Myers, who'd been disappointed by the Season of the Witch debacle (so-called); they were practically standing in front of the producers' houses holding fistfuls of cash, begging somebody to come outside and take it.
You must remember this.
That's the only reason the rest of the movies happened.  There was no artistic impulse at play here; there was no yearning for the soul's expression.  None a that shit.  Just moneymoneymoney.  As I've said before, I don't blame them.  Not one little bit.
But I do think it's incumbent upon fans to remember that.  And it's especially incumbent upon non-fans to remember that.  Until at least H20, there was nothing happening in this franchise but pure commercialism.
This does not inherently mean that what happened next was destined to be bad.  You must also remember that.
Before we proceed, let me state definitively: the first time I saw IV and V, I thought they more or less sucked.  I liked VI, more or less, but only mildly.  So if you've come here expecting the sort of enthusiasm I showed for the first three films in this series, you're apt to be disappointed.  Probably.  There's no guarantee of it; sometimes when I go on these deep dives, I end up bobbing to the surface again with a much greater appreciation of the movie/book/whatever than I had before submerging.  It's part of the reason why I enjoy doing these so much; they tend to reward me.
So who knows what we might discover?  I'm just saying, maybe ramp those expectations down a bit if you're a big fan of these films.
We won't know until we get there, I guess, so let's get to gettin': 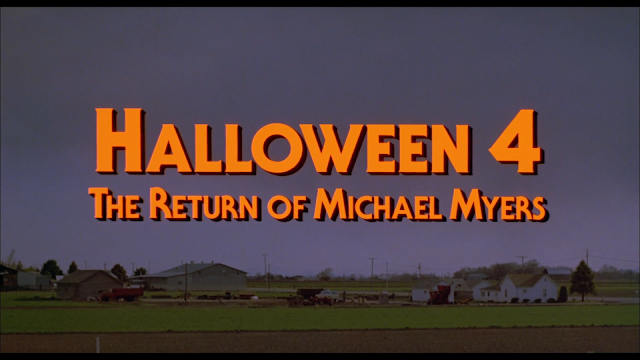 So here's what happened.  John Carpenter and Debra Hill got out of the Halloween business for good following Season of the Witch, and producer Moustapha Akkad was left without a brain trust.  There was nobody around to decide what direction the franchise should go in except Akkad, and Akkad correctly determined that what the public wanted was for Michael Myers to come back.  Michael Myers WAS Halloween, so far as the public was concerned.

That, then, was the mandate for the fourth film: bring back Michael Myers.

The writers assembled to do so were as follows:

In other words, a bunch of nobodies got hired to write this film.  McElroy ended up writing the screenplay based on the story contributions of the others, and he at least has gone on to work consistently.  Not well, particularly; his credits include things like Left Behind: The Movie, Ballistic: Ecks vs. Sever, Wrong Turn, The Marine (as bad a movie as I've ever seen in a theatre), and so forth.  He did also create the animated Spawn series, which has some stature ... but then he also wrote the screenplay for the live-action movie, which is dookie.

So is The Return of Michael Myers.  Spoiler alert!  It's doo-doo.  I do admittedly kind of like it for various reasons, but ... yeah ... it's not good.

And if you want to know why, that murderer's-row of no-talent screenwriters is probably a big chunk of it.  Their big idea for how to bring Michael Myers back was this: hey, what if we just say he never really died in the first place?  And then we can say Loomis never really died, either?  Cue everyone slapping each other on the back and popping corks on champagne bottles.

To shepherd the production of this new chapter, director Dwight H. Little was hired.

To be fair, everyone has to start somewhere, and Little did go on to bigger and moderately better things like Marked For Death and Murder at 1600.  And he's directed extensively in television, including Millennium, The X-Files, The Practice, 24 (two episodes of the best season, the fifth), Prison Break, Castle, Dollhouse, Nikita, Bones, Sleepy Hollow, Agents of S.H.I.E.L.D., and Scorpion.  So compared to those writers, this guy is Federico Fellini.

Put those writers together with that director, and what you've got is pretty clear: you've got a movie being made almost exclusively to bring in a little bit of money with as little as possible being spent in order to facilitate it.

That's what The Revenge of Michael Myers is: a low-budget, low-imagination propping up of a corpse.

Amazingly, the corpse realized that somebody had sat it up, and it jolted back to a diminished form of life; the movie was an actual hit.  Not a huge one or anything, but an actual hit.

Let's have a look at it and see if we can figure out why.

As promised/threatened in my previous post (ranking the Halloween films), I have returned to Haddonfield to wreak more vengeance, this time by offering up a prose commentary on the films themselves.
This first post will tackle the three movies produced by John Carpenter, beginning with: 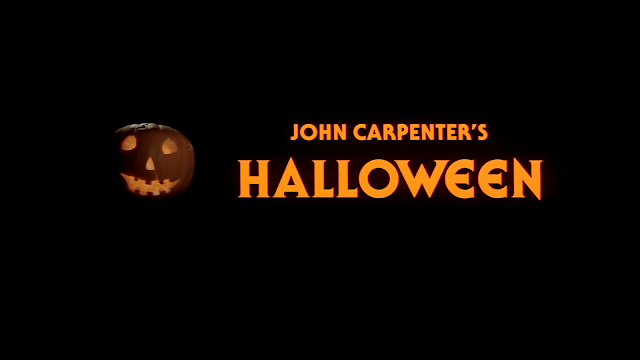 I wonder: how much of the first film's success (and subsequent -- and ongoing! -- mystique) can be attributed to the opening credits?  I'd wager a fair portion.  It's a very simple credits sequence, consisting only of a slow pushin on a jack-o'-lantern with a flickering candle flame dancing inside it, accompanied by one of the all-time great movie-music themes.
There are probably about 182 billion people in the world who'd be better suited to explain why Carpenter's music is great than I am.  But they're not writing this blog post, so I guess it's me or it's nobody.  And what I'd say about the theme is that it is perfect.  Why is it perfect?  No idea; get one of those other people to explain that one.  Something to do with the combination of rhythm and intensity; something to do with the spareness of the arrangement combined with the precision of the performance.
Whatever it is, it perfectly evokes both the allure and the dread of being in a scenario filled with mock dread.  And that's part of the key, too, I think; there is a playfulness here that summons up childhood make-believe.  I don't think this movie or this music is about actually being afraid; I think it's about pretending to be afraid, and having a good time doing it, but maybe doing juuuuuust a little too good of a job.
Anyways, that's what this music says to me.  And the jack-o'-lantern photography fits it like a glove; or vice versa, depending on how you see it.  It's a "simple" sequence, sure; but it's astonishingly effective, and hey, if it actually WAS that simple, wouldn't every movie have a credits sequence this great?
Read more »
by Bryant Burnette at 5:55 AM 14 comments:

This October is bringing us the eleventh film in the Halloween series: Halloween.  No, not Halloween, or even Halloween; this is Halloween.
Why you'd be okay with having three out of the eleven films in your franchise bear precisely the same title is a mystery to me, and it's one we're unlikely to unravel over the course of this post.  However, it will be an adequate backdrop for a post about a rather eccentric and -- it must be said -- nonsensical series of films.  These are weird movies, guys, filled with weird plot points designed to stretch the franchise for just one . . . more . . . movie . . .!!!  And to be fair, it mostly worked; and yet, deep weirdness was frequently the result.  So sure, why NOT name three of the movies the same thing?
If you will allow me a brief indulgence, I'd like to set the scene by offering a brief chronology of my initial exposure to the films.
1997 -- I saw the original John Carpenter movie for the first time this year and loved it
2001 -- I (reluctantly) watched the sequel and hated it
2002 -- I (at the behest of a friend who loved it) watched The Curse of Michael Myers and liked it
2007 -- I watched the Rob Zombie Halloween and loved it
2009 -- I watched the Rob Zombie Halloween II and hated it
2012 -- I watched the entire series in order, seeing 3-5 plus 7-8 for the first time
2014 -- I bought the limited edition Complete Collection Blu-ray set and did not watch it
2018 -- prompted by the podcast Halloweenies, I worked my way through the entire box set
And here we are.
I mention all that to establish a couple of facts: one, that I am in no way precious about these films; and, two, that despite that fact, I am definitely invested in the series (if only for the original and the rare moments when the followups rise to something approximating its level).  I am a fan, but no a slavish one.  I think and hope that this makes me qualified to give these films a fair assessment.  You be the judge on that score.
By the way, Halloween will not be covered.  I haven't seen it yet, and to be honest, I just don't much get into the idea of immediately trying to figure out where to rank a new movie in a series.  Will I rank it someplace mentally?  Well, yeah, probably so; but I'll get it dead wrong, if my past experiences are any indication, so I figure let's let it settle for a while.  If I ever do a 2.0 version of this list, I'll rank it then.
Hey, I just had an idea.  Here is how I will refer to the three identically-titled films in any context that does not make it clear which I am referring to:
Halloween = the original John Carpenter movie
Hall2ween = the Rob Zombie movie
Hallowe3n = the David Gordon Green movie
I think that manner of nuclear option may be called for; lack of clarity has come to your little town, sheriff.
And I should also mention before we proceed any farther: this list is going to piss you off.  Oh man, you're gonna fucking hate this list, I bet; and when you feel that hatred bubbling and about spill over the top of the kettle, remember this: it's only some dude's list.  It's filled with that dude's biases and quirks, and is his brand of bullshit, which may not be your own.
But I'm not about to let that stop me, because I am that dude.

So let's start slashing our way through these suckers beginning with the worst movie on the list, which is unquestionably:
#10 -- Halloween: H20
(1998) 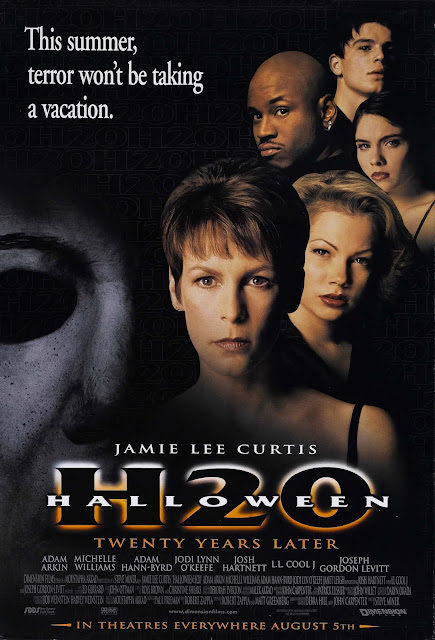 What a pile of shit.  It's got its fans, but I find it almost impossible to drum up even a moderate amount of like for this movie.
H20 is a film for which I have no nostalgia whatsoever.  Why would I?  I didn't see it when it came out.  As mentioned above, I didn't see it until this decade, when embarking upon a mission to see every film in the series.  I got no nostalgia for this flick at all, man; zero.  And hence, no love, and very little like.