Traditionally, I have been a hardcore Oscars fan.  I can't remember the first year I watched the show beginning to end; it would have been probably 1992, but it may have been even earlier.  (I'm guessing I saw at least part of the show every year when my parents watched going back even farther than that; so there's no telling when my actual love for the show began.)
I mention that because whatever year it was -- and I'm officially going to claim 1992, because it's the first one I can remember for sure -- it began a streak of me seeing the show annually.  That streak remains unbroken since; pretty good long streak.  Every year, it's been a thing I've made time for, generally with a great deal of excitement.  It's a known thing at my job: Bryant does not work on the night of the Oscars.  In college one year, I had a lab exam scheduled on the night of the show (this was back when the awards were given out on Mondays); I skipped the exam and dropped the class.
That's how devoted I have been to watching the Oscars.  And I always enjoy them, too, even when they piss me off (like every time John Williams loses).  I'm the guy who thought David Letterman did a good job.  I enjoyed Seth MacFarlane.  I even thought the Anne Hathaway/James Franco show was entertaining.  I want more awards!  (An Oscar for stunt coordination needs to happen, and I'd also like to advocate for an award for animal training.)  More montages!  Six-hour shows that stretch from mid-afternoon to the end of the night!  I demand lifetime achievement awards!
I'm not sure I'm watching this year.  I might; I've not ruled it out.  But the fact is, I kind of have stopped caring.  I got very, very close to not watching two years ago; in fact, I only watched at all because of happenstance.  I was glad I did; that was the year of the dramatic Moonlight/La La Land flub at the end of the show, and I'd hate to have missed that for sure.
I'm just not really able to keep up with the movies anymore.  In asking myself where all the time to do so has gone, I'm forced to a single conclusion: it's been consumed by blogging.  I'm not sure whether it's evident in the actual blogs themselves, but I spent a LOT of time on this stuff.  Too much, probably.  It's a lot of fun, though, so why wouldn't I?  Enjoyable though it may be, it crowds out other things.  Often, when the choice is "do I watch this new movie or do I work on one of my blogs?" it is the blogging which seems both more appealing and more productive.  Next thing you know, I've seen a mere two of the Best Picture nominees.  (I'm doing well this year; last year, I think I saw only one.)
Also, frankly, the political angle of the show is wearying.  This despite the fact that the show's politics more or less align with my own.  I just don't find it entertaining to have to engage with that sort of thing.  (Another advantage of blogging, generally speaking.)  This is a poor reflection upon me as an individual, I'd guess.  I don't blame the show; I blame me.  Whoever we're blaming, the last two years have been somewhat teeth-gritting occasions at the Oscars, and I'm just not super into that.
You know what I am super into, though?
Fake Oscars for the entire history thus far of King movies.  Somebody suggested this in a comment a while back -- in response to something I'd said about a specific performance in a specific King movie, if I remember correctly -- and I thought it was a cool idea.  We don't have to worry about politics (much); we don't have to worry about whether the host is going to be any good; we don't have to worry about the runtime.  We also don't have to worry much about the idea of recency bias, because these awards cover multiple years, and encompass the first King movie (Carrie) straight on through to the most recent one (technically Children of the Corn: Runaway, which -- and I don't want to tip my hand here -- seems like a dark-horse contender at best).
All we have to worry about is how cool it would be if somebody did this for real.
So without further ado, let's have a look at the nominations for


First up: a category that does not exist in the real Oscars, but (in my opinion) should:
Read more »
by Bryant Burnette at 5:36 AM 24 comments:

A Guided Tour of the Kingdom: A Chronological Walk Through the Career of Stephen King, Part 16 (2018)

It's been quite some time since I cranked up this here tour bus; truth be told, I'm not too sure it's still in good running order.  But y'all pile on in; that's right!, don't be shy, you don't need no ticket, just get onboard.
Now, let's see if this baby'll crank.  (You hear me, baby?  Crank for these nice people!)
Here goes...

Well, how about that?  Aw, she still purrs like a doggone kitten, doesn't she?
Well, okey doke, Constant Readers, let's hit the road again, at long last!
If you'll look to your left, you'll see our first stop:

"All I Care About Is You"
(short story by Joe Hill) 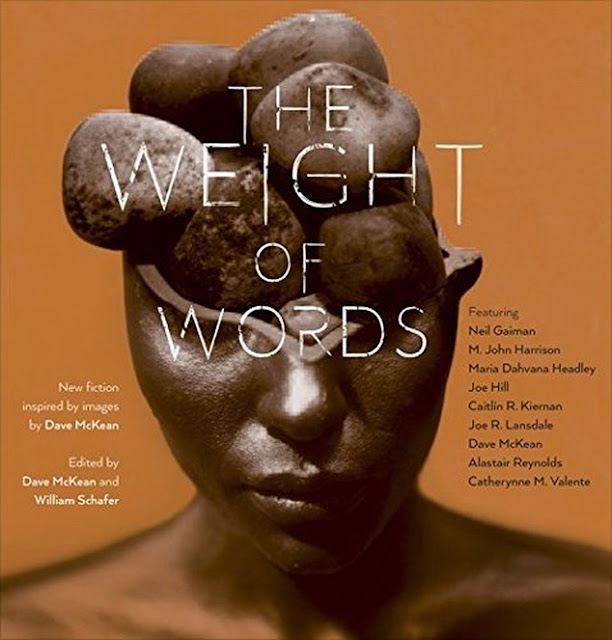 It's true; I did, and it is.  Earlier entries in this series of posts did not include individual short stories by Joe Hill, Owen King, etc. for the most part; I felt like Stephen himself ought to remain the primary focus, and just thought it might be better not to include too much stuff by his various family members.

However, I've decided to update this Guided Tour series annually with year-of-King types retrospectives, and so I thought perhaps it might make sense to begin including some of the things I was omitting in the longer, multi-year posts.

So here we are, opening the King Year Of 2018 by grandfathering in a lingering bit of (Joseph Hillstrom) King fiction.

And boy howdy is it a good one.

For my money, "All I Care About Is you" immediately vaulted into the upper echelons of Hill's short fiction, alongside "Pop Art" and "20th Century Ghost."  It's a whimsical (?) sci-fi tale about a girl and her father and a mermaid and a robot, and it may leave you with a dropped jaw and a desire to turn right back to the first page and begin reading it a second time.  It did me, that's for sure.

''Sleepwalkers'' Revisited, Part 5: A Review of the Scream! Factory Blu-ray

Surprise!  You only thought this series had ended.
I thought it had ended, too, but since Scream! Factory has seen fit to grace us with a special-edition Blu-ray complete with about an hour's worth of new segments interviewing various of the film's participants, I thought it made sense to write a review of it and call it Part 5 of my Sleepwalkers Revisited series. 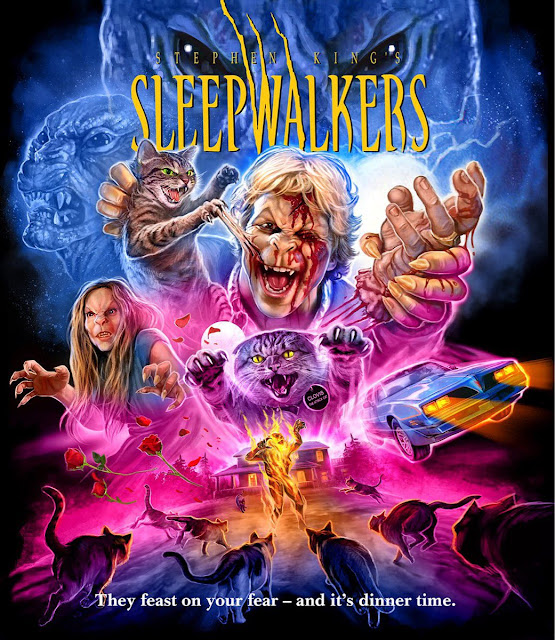 Those enlightened among you who wish to check out the first four posts in this series can do so here:

This fifth and final (?) installment will focus not on the movie itself, but on interesting bits from the bonus features found on the Blu-ray.
We'll begin with the interview segments.  First up: 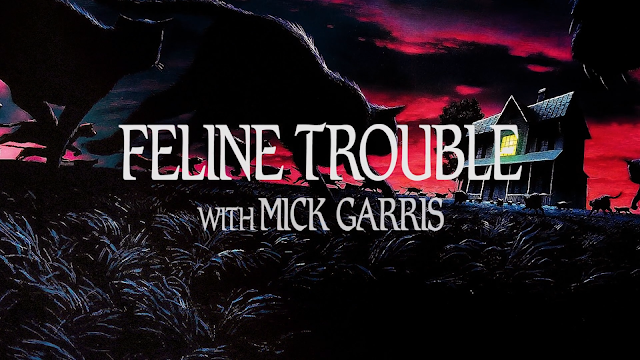 Which is not focused directly on the film's cat problems, as the title might lead you to expect.  Instead, it's a general-purpose eighteen-minute interview with the director.

Here's what I had to say about this episode in 2016 when last I ranked all of King's movies and tv shows:

Coming from a decidedly slight short story (one which King originally published under the pseudonym "John Swithen"), this tale was an odd choice for inclusion in Nightmares & Dreamscapes (the miniseries, that is, not the book).

The episode is a moderately well-made adaptation, but the story just doesn't amount to a whole heck of a lot, so the best thing you can say about the episode is that it's mediocre.

I can now reveal to you that those words were a pure bluff.  When I wrote them, I couldn't remember a dadgum thing about "The Fifth Quarter" in prose or television form.  I had a vague sense that the adaptation had added a bunch of stuff that wasn't in the story (which is true), but beyond that, I had bupkes.

I'll be better-prepared this time... 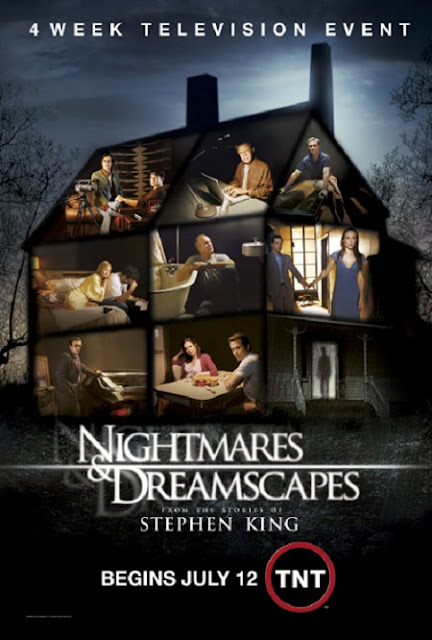 The TNT adaptation of "The Fifth Quarter" was the sixth episode of the 2006 miniseries Nightmares & Dreamscapes, which was mostly (though not exclusively) based on stories collected in the book Nightmares & Dreamscapes.  I say "not exclusively" because two episodes are based on stories from Everything's Eventual, and one on a story from Night Shift.

Confused yet?  So was the person selecting the stories, I think.  This is true not only due to the title/collection confusion, but also due to the presence of "The Fifth Quarter" in more or less ANY miniseries adapted from King stories.  You've got (I assume) dozens of tales to select from, and you end up with the mediocrity that is "The Fifth Quarter" on your final list?  I don't get that as a choice, man; I surely do not.

But let me be clear: while I think "The Fifth Quarter" the story is a mediocrity (and asserted it in review form here), I mean just that.  And "mediocre" is different than "bad."  So don't think I'm sitting here clowning that story; I'm not, so by extension, I'm not quite clowning the decision to adapt it.  I think better stories by far could have been picked, but could a perfectly acceptable hour of television have been the result?  Sure, why not?

I'm about to argue that that, sadly, did NOT happen.  Could have; didn't.  Not as I see it, at least.

I'm quite down-in-the-mouth as regards Nightmares & Dreamscapes in general, actually.  Even the universally-well-regarded "Battleground" episode sometimes leaves me grumpy; other times I think it is wonderful.  I'm a rollercoaster of emotions with that one, for whatever reason.  But I'm a lot more stable with the remaining seven episodes, all of which I dislike, some intensely.

"The Fifth Quarter" isn't one of the ones I dislike intensely, but I do dislike it, and for most of the same reasons I dislike the others: it just feels like cheap early-to-mid-'00s television to me.  I'm not sure it actually was cheap -- the cast for the miniseries as a whole is fairly good, and there are some quality directors onboard as well -- but it looks it.  The cinematography is consistently cut-rate; the editing is showy but ineffective; the musical score is generic sonic wallpaper.

Maybe we'll get into some of that in more depth later on, but for now, let's focus on the changes screenwriter Alan Sharp made to King's source material.  The story itself is set in a mere two locations and has a mere four characters.  This is PRIME cheap-television material; why you'd consider expanding the story to include an additional half-a-dozen or so characters and a handful more locations is kind of a mystery to me.  Especially since the story you're drawing from is alright as-is.  Nothing special, but if you get the right actors in the roles and the right filmmakers behind the camera, you could turn it into an enjoyable exercise in tension.