It's Oscar Sunday, and the world waits anxiously to find out which movies it's never heard of will take home the gold.  Will it be that black and white one?  Or will it be that other one, with the two guys in it?  We shall see.  Or not, as the case may be.
I'll be tuning in.  I was on the fence about it when I wrote my post announcing the nominations for these doofy awards I'm giving out today, but the crushing weight of tradition has buried me once again; count me in, Oscar, ya scamp ya.
But first, this: 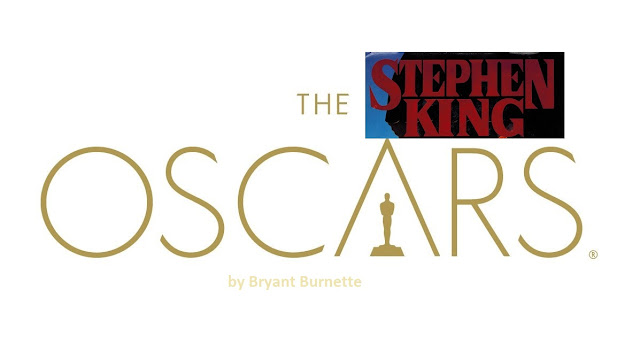 That's right, it's time to hand out the awards for the winners of the King-Movie Oscars.  And by "hand out," I mean read a bit of fluff from me wherein I defend my decisions.  And by "awards," I mean the same sort of awards you used to get if you won a No-Prize from Stan Lee.  They're in the mail, winners!

Was there any doubt?  The other nominees contain very fine work indeed, and (if such an award existed) would have deserved to be nominated for actual Oscars during the years they'd have been eligible.
For me, though, this one is a no-brainer.  The work Miller did with the team of Saint Bernards who collectively portrayed Cujo is truly a marvel.  At no point in the movie does it feel like you're seeing dogs pretending to do things; Cujo feels like a dog actually suffering from the tragedy of rabies.
Without the work Miller and those pups did, this movie would have been a laughable failure.

Our fourth and final post in the series begins in the year 1990, with: 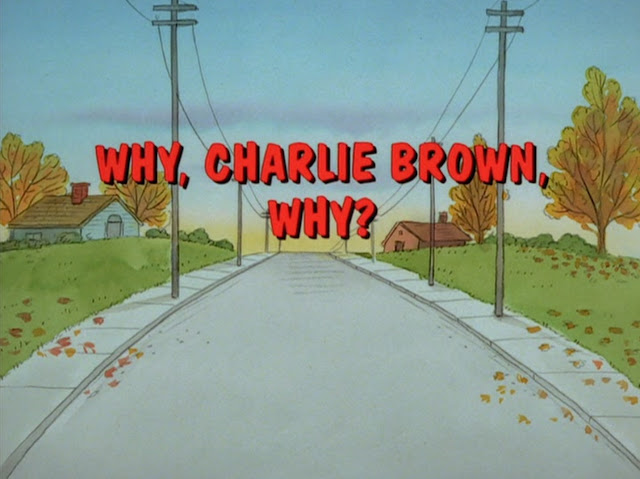 This one is about a friend of Linus's (Janice) who gets leukemia and has to go in and out of the hospital over the course of a winter.  Linus is very protective of her, especially when a bully mocks her for wearing a pink hat to cover her newly-bald head.

If this sounds like an awfully serious subject for a Peanuts special, well, maybe it is.  But there's an emotional reservoir from which all of Peanuts flows, and so it's really not as incongruous an idea as it might seem.

Unfortunately, I'm not sure it's an especially successful attempt this time out.  Too much of it feels like an educational film expanded to half-hour length.

A Guided Tour of the Peanuts Filmography, Part 3: The 1980s

Welcome back for the third post in this series.  No time for preamble, Doctor Jones; let's get right into it, beginning with:
She's A Good Skate, Charlie Brown
airdate:  February 25, 1980 (CBS)
written by:  Charles M. Schulz
directed by:  Phil Roman
produced by:  Lee Mendelson and Bill Melendez
music by:  Ed Bogas and Judy Munsen 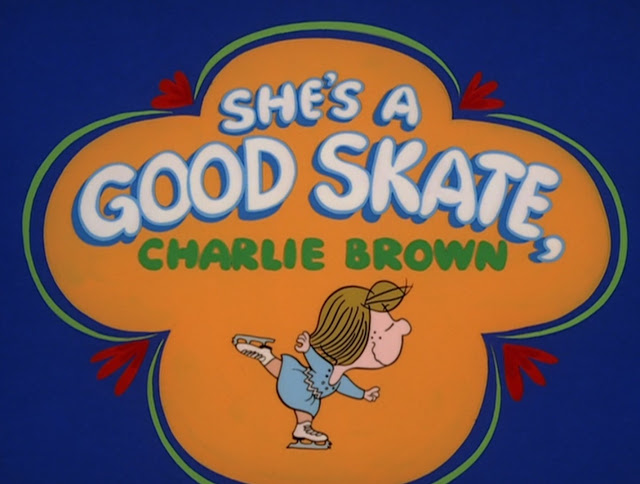 This special contains what has to rank as the most horrifying moment in all of Peanuts animation (at least up to this point): actual dialogue coming out of an adult's mouth as Peppermint Patty's teacher says something to her.  Mercifully, the teacher does not appear on screen; that would have been even more sickening, and we are at least spared that.  Later, a clerk in a store speaks, too!  Horrible.  I knew this happened, having encountered it in my research for this post; but even so, I'd forgotten when and where it occurred, so when it happened here, it jolted me through and through.

I'd seen this one before; as soon as it begun, I remembered it pretty vividly.  In fact, I think this was one of my favorites when I was a kid.  I'm not sure I could tell you why today, though; very little in it stands out to me.
Read more »
by Bryant Burnette at 12:33 AM 7 comments:

A Guided Tour of the Peanuts Filmography, Part 2: The 1970s

Welcome back for part two of this temporary sidestep away from the world of Stephen King!  A peek behind the scenes: my initial intent was to have this be a mere single post.  However, when I got to the end of it I determined that it was really much too long to publish in one large chunk.  Asking anybody to read that much in a single go is a big ask, and while that hasn't deterred me in the past (hi, Golden Years post! [with your ridiculous 26,000 words]), in this particular case it was fairly obvious how to split it up into a series of four posts.
And so I have.
Without further ado, let's get into the seventies, beginning with:
Play It Again, Charlie Brown
airdate:  March 28, 1971 (CBS)
written by:  Charles M. Schulz
directed by:  Bill Melendez
produced by:  Lee Mendelson and Bill Melendez
music by:  Ludwig van Beethoven and Vince Guaraldi (arranged and conducted by John Scott Trotter) 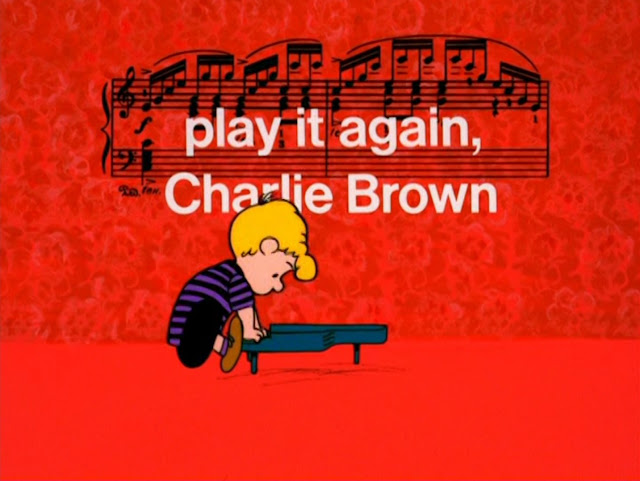 A Guided Tour of the Peanuts Filmography, Part 1: The 1960s

Every so often, I like to squander the goodwill of my readers by doing something which has literally nothing to do with Stephen King.  It's not a purposeful thing; I'm not planning to be Kingless on occasion.  It's just that every so often I'm seized by an itch to write about a thing which doesn't fit the theme of any of my blogs.  I figure I'm under no obligation to let that stop me, and so I typically don't.
With that in mind, I hope you'll permit me the self-indulgence of this exploration of the Peanuts gang on film.

To smooth things over a wee bit, here's a Peanuts strip from June 18, 1951 in which Charles Schulz may possibly have invented Pennywise:


And here's a King/Peanuts mashup I found: 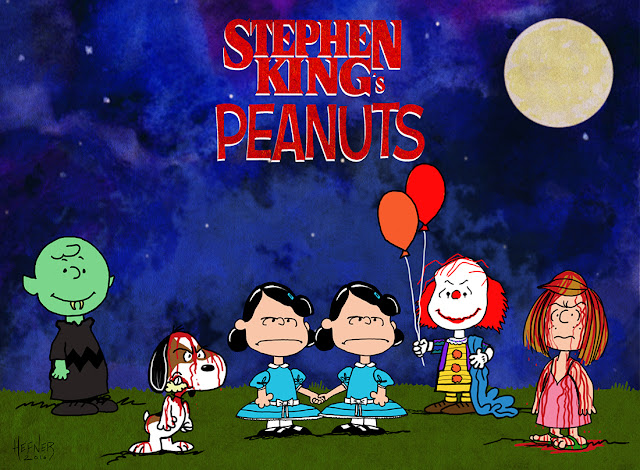 This is a dud for me.  For one thing, it should have been called "Peanuts by King."
Lucy as both of the Shining twins is funny until you remember there actually are a pair of twins in the Peanuts canon: 3 and 4 (yes, that's their names), who are by no means major characters but who do appear in the most famous of all the specials (and who are prominently featured in one of its most famous scenes).

Charlie Brown as a green Barlow is kind of funny, I guess, as is Peppermint Patty being mad about having received the Carrie treatment.  But really, if anyone in the Peanuts universe is going to be Carrie White, it's Charlie Brown himself, I think.

Linus as Pennywise?  Also a miss.  I'd have had Snoopy be Pennywise, if felt I had to have Pennywise represented.  As for Snoopy being Cujo ... that's just lazy.  If Snoopy was going to be anyone, he'd be Andy Dufresne.  I'll grant you that isn't easily cartoonable.

And hey, here comes a late update: King has made at least one direct reference to the world of Schulz in his own works.  Here's the relevant passage from the short story "The End of the Whole Mess":

"You'll like this," Bobby said, as if I hadn't spoken at all—a habit as familiar to me as his Ten Fingers Method of Hair Grooming.  He was never impolite but often totally absorbed.  And could I stop him?  Aw shit, no.  It was too good to have him back.  I mean I think I knew even then that something was going to go totally wrong, but when I was with Bobby for more than five minutes, he just hypnotized me.  He was Lucy holding the football and promising me this time for sure, and I was Charlie Brown, rushing down the field to kick it.

And with that in mind, let's get into the good stuff.
Read more »
by Bryant Burnette at 4:42 AM 19 comments: