Potluck time at The Truth Inside The Lie, part 2

Diving right in, let's have a look at: 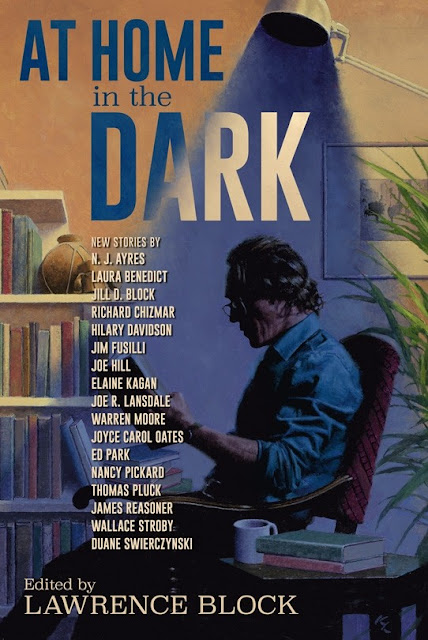 You can probably guess why I bought this new anthology from Lawrence Block: yes, sure enough, it was for the Joe Hill story.  And we'll get to that in a few moments.
First, an apology to the many authors represented herein whose stories I didn't read.  My standing policy is to read anthologies cover to cover, but folks, I'm badly off my game right now in all sorts of ways, and I just didn't want to spend the amount of time it would take to read it all.  Nothing more complicated or nefarious to it than that; I'm being a time hoarder over here, plain and simple.  That said, I felt pretty bad about it, so I did read a couple of pages from every story, and pretty much every single one of them seemed interesting, so my feeling is that this is likely a very strong anthology.
I did, apart from Hill's, work my way through two additional stories in full.
Read more »
by Bryant Burnette at 1:31 AM 8 comments:

Potluck time at The Truth Inside The Lie, part 1

I am in the midst of a week of vacation time right now, and thought I'd work my way through a few bits of King-related ephemera in lieu of doing anything useful.  In order to prove it, here come some random thoughts about it all, beginning with: 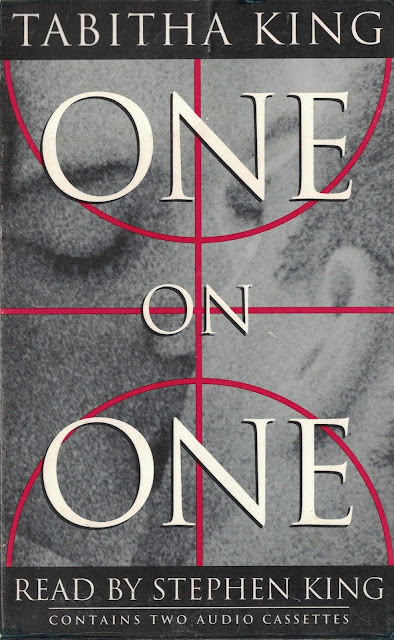 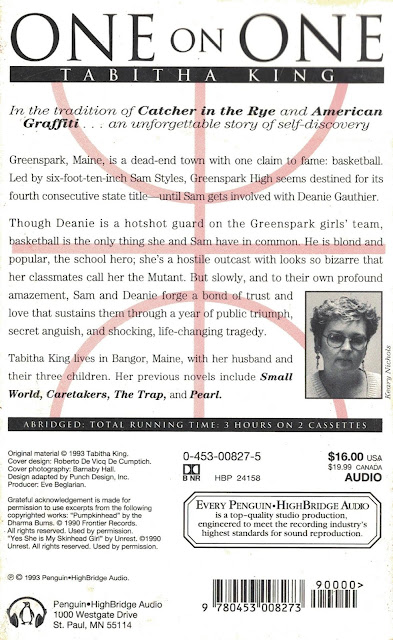 The last time I read a Tabitha King novel, it was The Trap, which I thought was pretty great.  It was only the third of her novels I'd read, and next up in the queue is a book called Pearl, with One On One being the next after that.  I'd been wanting to wait to listen to this audiobook until I had actually read the novel, because I generally find that I no longer respond very well to audiobooks as first "reads."  This is especially true of abridged audiobooks, which are something I try to avoid whenever possible.
However, I'm also -- verrrrrrrrrrry slowly -- working on a series of posts about audiobook versions of King books, and the next title up in my explorations was his abridged reading of Tabitha's One On One.  So I figured hey, the time has come; let's just dig into that, and think of it as a preview of the actual novel.
Which is exactly my response upon having finished it: I just got a preview of a novel.  And I think it's a novel I'm going to like quite a lot; maybe more even than Tabitha King's Caretakers, which I flat-out loved.
Thing is, I can't make that call based on an abridged audiobook, even one narrated by Stephen King himself.  Mr. King does a terrific job of reading Mrs. King's words; so much so that I immediately wished unabridged audiobooks existed of him reading all of her novels.  Frankly, she deserves the attention, and that'd be one way to get a bit more of it.
The story (as you can read a bit for yourself from the back cover) is about the fraught relationship between two high-school basketball players.  The Kings were, during the nineties, famous for their championing women's basketball at both the collegiate and high-school levels; Mr. King would work the sport into a short story ("Ur") in a roundabout way years later, but Mrs. King tackled the subject while they were in the thick of it.  And, indeed, she wrote a regionally-published nonfiction book (Playing Like a Girl) about a high-school hoops team only a year after this.
As I have found to be the case previously, Mrs. King's gift is for writing characters.  Deanie Gauthier is maybe the best I've read from her yet; I found her to be incredibly frustrating but also utterly irresistible, which meant that I was in complete sympathy with Sam, her male counterpart.  This is a different-sides-of-the-tracks relationship, in some ways, but in a setting where more or less everyone is a born loser.  Basketball arguably offers them both a way out of that world; but that world has its hooks in them deep, and does NOT want to let go.  I got deeply invested in this relationship, and its ups and downs worked on me fully even though I was getting only what felt like a cursory summary of the novel's events.
That, of course, is the problem with abridged audiobooks.  By definition, a lot of things have to get cut out; in a way, it's like hearing edited-down clips of songs and saying you've listened to a whole album.  Nope, you sure haven't; and here, I really felt it.  I was never sure when I bouncing from one scene to the next because it had been designed that way by Mrs. King, or because the rough blade of abridgement had sliced a scene to smithereens.  It was mostly the latter, I feel sure.
Nevertheless, I found it to be enjoyable.  The bottom line for me is that I love to hear Mr. King narrate a story; he's really, really good at it.  He keeps the goofy character-voice tomfoolery to a minimum, and just goes at the material in straightforward fashion.  I guess I'm glad he's spent much of his life writing books, as opposed to narrating them; but if somebody told me he'd spent secret hours recording dozens of audiobooks for other authors' works, I'd buy every single one of them when and if they got released.  This is not merely because I'd feel obliged to for my collection, but also because I just like the way he reads.

Email ThisBlogThis!Share to TwitterShare to FacebookShare to Pinterest
Labels: Dolores Claiborne, Gerald's Game, If It Bleeds, Insomnia, Joe Hill, Lisey's Story, One On One, Rage, Tabitha King, The Dark Tower, The Outsider, The Rock Bottom Remainders, The Stand, Ur, Wizard and Glass

A gallery of cover art from Russian editions of King books

Today, I've got something for you that I would have liked to have put out much sooner -- but life gets in the way sometimes, and I've had precious little hours in the week to devote to blogging of late.  Better late than never, though, one hopes!
Anyways, a while back, a commenter named Arseniy left some links within comments on my 2018 King-books rankings in which he pointed our attention toward the cover art for Russian edition of the books.  I asked if he'd mind me turning that into a post, and he said he wouldn't, and I said I would, but then over two months went by.  However, I never forgot about it, and so now, I present to you, courtesy of Arseniy, a look at some awesome editions of King books.
I'll go in chronological order by publication, beginning with:
Read more »
by Bryant Burnette at 12:39 AM 30 comments:

You Need to Be Listening to ''Derry Public Radio'' (Plus: A Trilogy of Interviews!)

Y'all know me; know what I'm about ... and it will therefore come as no surprise to you to know that I have a Google Alerts email subscription for stories pertaining to Stephen King.  I get a dozen or so of these emails a day, and they contain all manner of links: news items about upcoming movies or television shows; reviews (both professional and otherwise); items for sale on eBay, Craigslist, etc.; torrent mirrors; memes; random bullshit that has nothing whatsoever to do with Stephen King; news about other people named Stephen King (such as the economic advisor one or the politician/scumbag one or the photographer one); and so forth.
Also: occasional podcast episodes.  (More on which momentarily.)
Guess what?  I literally just got one of those emails while typing this.  Let's have a look: 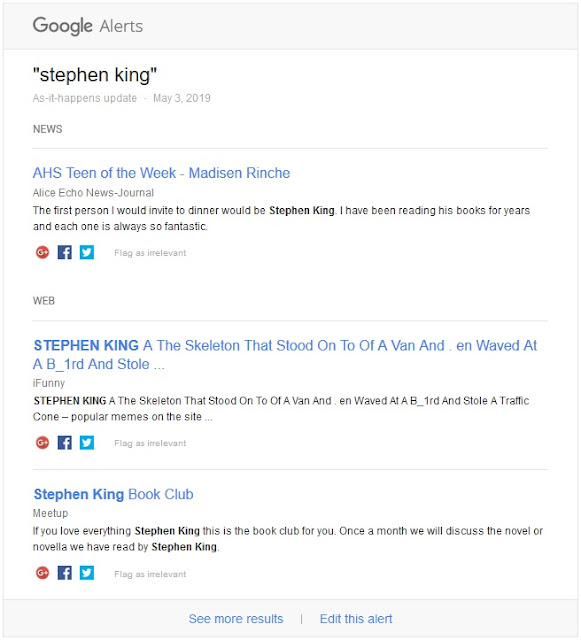 Most of the emails contain links that are (like the sample ones above) entirely ignorable.  However, in my capacity as an amateur King scholar, I curate what I like to think of as an extensive archive of King-related news items.  That being the case, I take it as my solemn duty to sift through these emails in the hopes of finding something valuable to add to the archives.

On many days, one or two articles do indeed get added to the archives: today (May 3 as I am writing these words), for example, an interview with Greg Yaitanes about having directed the Castle Rock season two premiere.  Also today: an article on the website for the Bangor Daily News about King's love of baseball and how it has historically impacted the town.  Good stuff, especially that latter one (which has some nice photos) -- and I'd possibly never have known about it if not for Google Alerts.
I'd probably also never have known about Derry Public Radio.

Or if I had, I wouldn't have known about it immediately.  Luckily for me, though, I got one of those emails in early May of 2018, and it included an item about a then-brand-new podcast: Derry Public Radio.  The link was to a Reddit post the pod's creators had made announcing themselves to the world, within which was a link to a Soundcloud page for the first episode.

It sounded intriguing, so I decided to give it a shot. 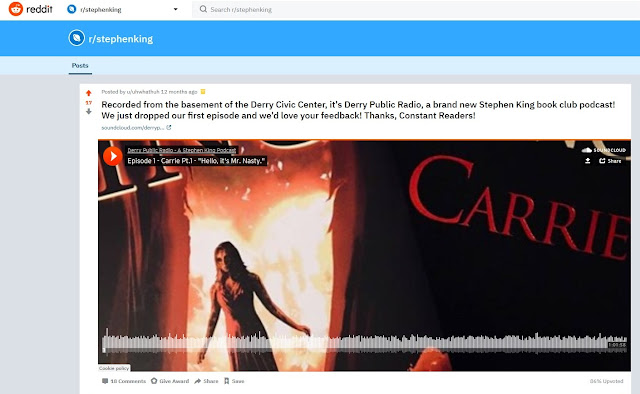 This wasn't the first time I'd discovered a King podcast in this manner.  Matter of fact, podcast episodes pop up fairly regularly via Google Alerts.  That's how I found The Losers' Club, for example, and I think it may have been how I found the Stephen King Cast as well.  Terrific podcasts, both.
Those are the gemstones amid a field of pebbles.  Much more common, in my experience, for google Alerts to alert me to podcasts which I find to be annoying, amateurish nonsense.  And I say that as an annoying, amateurish blogger self-aware enough to know the hypocrisy with which he has just spoken.

I'm not wrong, though.  Nine times out of ten, the descriptions of the podcasts are sufficient to make me feel no urge to listen to them; of the ones I do decide to sample, nine out of ten of those are not to my liking.  Some come at the material as primarily comedic podcasts that use King's books (or, more often, movies) as a vehicle for delivering snark; others seem primarily to be interested in describing what drinks they are having during the recording; others are hosted by people who are not actually very good at talking.
That last observation of mine brings me to an uncomfortable truth: in addition to be an annoying amateur, I'm also a judgmental prick.  Guilty!  No contest, judge, take me on away.

But look, man . . . you gotta sort the wheat from the chaff one way or another.  Nobody anywhere eats Chaff Thins.  So I figure that if a podcast hasn't hooked me within five minutes then it's best to move on.  In a perfect world, maybe I'd just listen to it all and be content with that; but in this imperfect world, where time is at an ever-increasing premium, ain't nobody got time for that shit.  So sell me on your podcast quick, or find yourself unsold.
I was sold on Derry Public Radio within about two minutes.

It was immediately clear that the three hosts of this particular show were (A) more interested in King's work than in proving their comedic chops; (B) possessed of sufficient comedic chops to have done it the other way and made it work if they had so chosen; (C) skilled enough at speaking to pull off podcasting as an artform of its own; (D) insightful; (E) determined to bring a polished production quality to the podcast; and (F) loose enough to not be precious about what they were doing.
In other words, they were/are naturals.
Read more »
by Bryant Burnette at 5:29 AM 10 comments: