I Was Built to Believe in Weird Stuff: A Review of ''Nightmares & Dreamscapes''

Nightmares & Dreamscapes was published in late September 1993, and might well have come as a relief of sorts to many King fans.  Since he ended his Castle Rock cycle in 1991 with Needful Things, he'd pumped out two relatively slim novels that told mostly non-supernatural stories.  Those books were Gerald's Game and Dolores Claiborne, both of which I love; not all King fans do, and while I can't presume to speak for anyone else, I'd wager that more than a few Constant Readers were a bit worried about the direction their favorite author was taking back in those days.
Imagine, then, what a relief, this cover must have been: 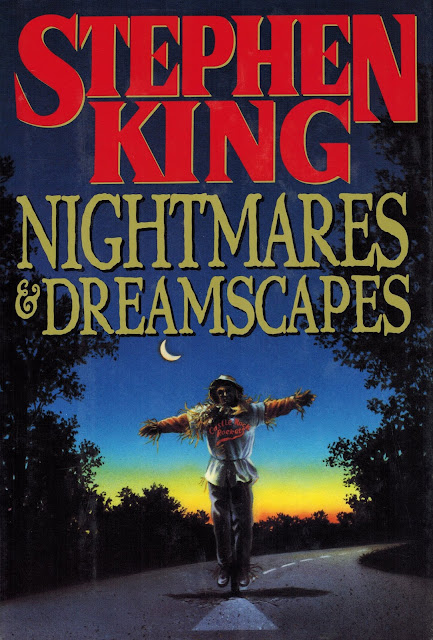 I can't remember the first time I saw it, but I love it, and assume I must always have done so.  That Rob Wood cover art is just wonderful: suggestive of the arrival of a peaceful and comfortable night-time after some long and taxing day, the colors manage to make the spooky scarecrow -- standing implausibly in the middle of the road -- a welcoming figure and not an intimidating one.
That's not the description I intended to write when I began that sentence.  I expected to write something about how the colors informed one that King was back at the horror game.  And the cover does suggest that, as well, but I think it also suggests comfort, which in turn implies familiarity.  And that makes a sort of sense given this book's place in King's bibliography, don't you think?  If many King fans were breathing sighs of relief to find that King (after the abused-women duology of Gerald's Game and Dolores Claiborne) was in the mood to get spooky again, then it makes sense to see that scarecrow as being a welcoming figure.  Bottom line: I think the cover art works either way.
Before we get into a discussion of the book's introduction, let me tell you what this post won't be: in-depth.  I do have a tendency to aim for going deep when it comes to writing about King's short fiction, as anyone who has read my reviews of the following stories can attest:
The Glass Floor
Cain Rose Up
Here There Be Tygers
Strawberry Spring
Night Surf
The Reaper's Image
Stud City
Slade
Graveyard Shift
The Blue Air Compressor
I Am the Doorway
Suffer the Little Children
The Fifth Quarter
I sometimes allow myself to run hog-wild on this blog, and so you get what we had here for "The Fifth Quarter," which was slavering lunacy.  I personally found it be rewarding, but I don't know why anyone would ever read what I wrote with that one.  To those of you who did I say thanks with apologies.
Anyways, the point is this: we won't be doing that sort of thing in this post.  In fact, I'd anticipate that as I march through the book, I'll restrain myself from writing more than three or four paragraphs about each story.  I'd love to write in-depth pieces about each; but that sort of attention is best saved for the series that all the above links come from.  See, those -- most of you know this, but I'll make it explicit nonetheless -- are King's stories in chronological publication order, whereas Nightmares & Dreamscapes is a collection that spans several decades' worth of material.  So I'll cover those individual stories when they come up in the chronology (as, indeed, two of this book's stories -- "Suffer the Little Children" and "The Fifth Quarter" -- already have).
What was that I just heard?  A collective sigh of relief from this blog's readers?  Well, it was a wind of some sort, and if it was of that variety I wouldn't be too surprised.

With that in mind, let's hop right in, beginning with:

"Myth, Belief, Faith, and Ripley's Believe It Or Not!"


About which I might theoretically end up saying more than I'll say about the stories themselves, simply because it's nonfiction, and therefore won't be a part of that incredibly-slow-moving blogthrough of the short stories.  It is King's introduction for the book, and (like the introductions to his previous collections, Night Shift and Skeleton Crew) it is wonderful.

"When I was a kid I believed everything I was told," King begins, "everything I read, and every dispatch sent out by my own overheated imagination."

I can relate.  When I was a child, it was as though I lived in a world of hyper-reality, where everything was exactly what it seemed to be, but plus, somehow.  I loved the things I loved more than I ever had the ability to cope with or even understand; and the things that scared me (which was almost everything) scared me so much that it was like walking through a perpetual nightmare.  A really lame one, granted; but still.  Those feelings -- of wonderment and terror alike -- have mostly dimmed over time.  Long ago, in most cases.  They kind of just shorted themselves out; they're still there, but it's like someone turned down the volume ... or flipped the switch that turned them from color to black-and-white.

I think this helps explain my continued need for stories.  When I read a great book or watch a great movie or hear a great song, it's like the volume on my emotions has been turned all the way up again; like the color has been brought back to my inner life.  That's an awfully pretentious way to think about it, and it's probably not terribly accurate in many ways.  But it's the best I can do tonight, seemingly, so it'll have to do.