Welcome back for part two of our series focusing on King's early poetry. 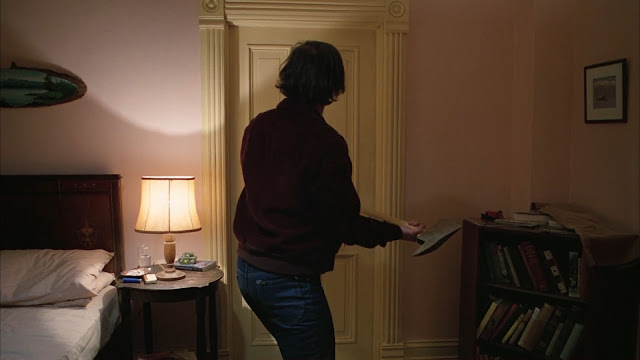 The Dark Man
Ubris, Fall 1968
reprinted in Moth, 1970
reprinted in The Devil's Wine, 2004
reprinted by Cemetery Dance as an illustrated hardback in 2013
opening line:
i have stridden the fuming way


Technically, I have already reviewed this poem, via the 2013 illustrated hardback that Cemetery dance issued.  But that review was really focused more on the illustrations and on the (to my mind) ill-conceived manner in which the poem was presented within that specific text.  We will focus here, then, on an analysis of the poem itself, which (in case you didn't know) is notable for being the first appearance in King's work of "the dark man," later to be known as Randall Flagg.

The poem consists of five stanzas of varying length, and is a first-person description by the titular figure of things he has seen and done.  Don't get too excited about this; he's not going to, like, tell you about how he was waiting for Captain Trips to get loose.  No, he's just a vagabond, and King tells us about some of his vagabond ways.

Let's work our way line by line through this one, using bulletpoints.  I apologize in advance for how tedious this is likely to be.  All quotation marks are mine, fyi, and the slashes indicate line breaks.

Email ThisBlogThis!Share to TwitterShare to FacebookShare to Pinterest
Labels: Charles Manson, Kiss, poetry, The Dark Man, The Outsider, The Stand

We Do Not Need Your Poets: A Look at King's College-Era Poems, Part 1

Did I ever tell you about my poem-writing years?  Hahaha, you are god damn right I didn't.  I did have a few in college, though.  Let's speak of them no farther than that.
I've got no inherent love of poetry, and I fear that in writing about it critically here I will sound dismissive, anti-elitist, or downright ignorant.  I arguably am at least a few of those things.  It's not my intent, though, so I wanted to state at the outset that while I may not have a love of poetry, I do have a respect for it.  During my creative-writing years in college, I did some survey-level study of the art form, and what I found was that the more one works at it, the more sense it makes.  Poetry is its own language in many ways; its own form in many others; and the contact which results from the proximity of those two truths creates something that is its own kind of truth, separate from them but inextricably related to them.
It is like keeping one's body fit: it must be worked at on a daily basis, and without putting that effort forth, one does not reap the benefits of it.
Put another way, if one does not put in the work, one cannot reasonably impugn the efforts of another who does put in the work.  One can, of course, UNreasonably impugn those efforts; but in so doing, one risks being a fat person standing on a corner making fun of the lithe joggers passing by.
I kind of worry about that being the standpoint this post comes from.
Ah, but in my case -- fat though I may be! (literally and metaphorically alike) -- I think maybe I still know enough to avoid most of those traps.  I'll tell you now that I have no idea what form this post is going to take beyond that.  I feel secure in my abilities to critically analyze prose; or, at any rate, secure enough to do my version of it.  It might not pass muster in academic circles, but it's an adequate representation of my own interests.  I've got no such security when it comes to analyzing poetry, however, so I'm not even entirely sure I'm about to attempt it.  Might; might not.  Might settle instead for merely pointing in the direction of a forest, saying "Trees," and running away before anyone can question me further.
Say, this post needs an opening image, doesn't it?  How about I find something to evoke the era?  I'm going to do a Google Images search for "1968 poetry," and we'll see what comes up.

That'll do, I guess.
And now, poems.  We'll begin with:
Harrison State Park '68
Ubris, Fall 1968
reprinted in The Devil's Wine, 2004
opening line:
— Can you do it?
We're in the weeds already, because I'm not sure I've given the correct opening line.  The poem actually begins with a pair of epigraphs, one from Thomas Szasz ("All mental disorders are simply detective strategies for handling difficult life situations.") and one from Ed Sanders ("And I feel like homemade shit.").  The actual first line, then, would be:
"All mental disorders are simply detective
But that only if one is obliged to consider an epigraph (especially one consisting of some other person's words) as an actual part of the poem, as opposed to something which technically exists outside the poem.  Such classifications are not clearcut; some poets play with the form in a knowing manner designed to test, stretch, or even obliterate such distinctions.  In some ways, that's what poetry is.  I'm not saying the medium is the message -- not exactly -- but I am saying that the two are inextricably linked, and that one ignores that fact at one's own peril if one is analyzing a product of that medium.
To that end, let me say this: I will try to be as exact as possible any time I replicate any of King's verse in this post, up to and including punctuation, pagination, etc.  One cannot be too careful.
Read more »
by Bryant Burnette at 5:55 AM 17 comments:

This post began its life as a would-be appendation to my first review of "Stud City," but at some point I realized it was substantial enough that I probably ought to just cut it off into its own thing.


In so doing, I am making an assumption that there is literally anyone on Planet Earth who gives enough of a shit about "Stud City" for an exercise like this to be worthwhile.  Anyone other than me, that is; I myself do care enough, though I am not sure why.  Nor am I sure that that is a thing I should feel good about.  But hey, here we are.  And now, if somebody out there who cares about the story gets curious as to the specifics of how the original version differs from the Different Seasons version, well, by golly, this blog has got them covered.
I like to have an image of some kind near the front of my posts.  Normally, I'd use the cover of the source the story at hand came from, but in this particular case, I did that the first time.  So instead, let's turn our eyes to Google Images, and see what can be seen.  I now present to you the five most incongruous images which appear when searching for the phrase "stud city."


With that foolishness out of the way, here comes another type of foolishness altogether.


You're traveling through another dimension, a dimension not only of sight and sound but of mind.  A journey into a wondrous land of imagination.  Next stop: the Twilight Zone...
The first episode of the second season introduced not only a revamped saga-sell narration by Serling, but also an entirely new opening-credit sequence.  The first-season theme music (by Bernard Herrmann) was gone, too, replaced by the iconic Marius Constant theme that begins with the repeated four-note phrase revered even to this day by lovers of the mysterious and terrifying.
And also happening for the first time: Rod Serling appeared on-screen as the host, introducing the episode.
In other words, The Twilight Zone kind of became what we think of as The Twilight Zone at the outset of its sophomore season.
"King Nine Will Not Return"
(season 2, episode 1)
airdate:  September 30, 1960
written by:  Rod Serling
directed by:  Buzz Kulik
Odd how the real consorts with the shadows, how the present fuses with the past. How does it happen? The question is on file in the silent desert, and the answer? The answer is waiting for us - in the Twilight Zone.
A WWII pilot wakes up in the desert, having been thrown from his plane during a crash landing.  Then he wanders around and yells a lot. 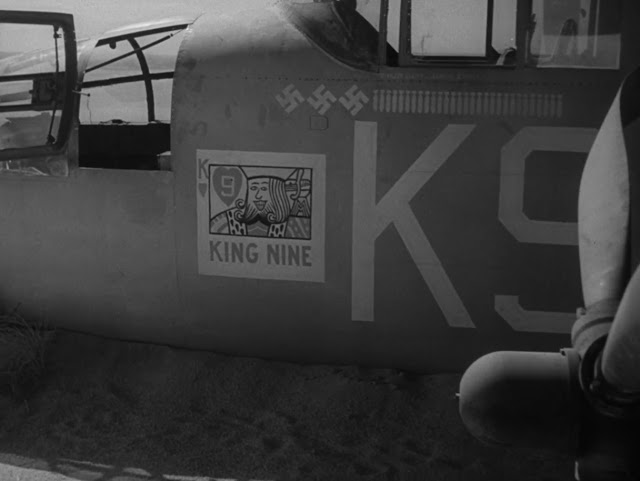 Boy, I did NOT like this episode.  I didn't like much of anything about it, to be honest with you, except for the new theme music.  The episode hinges almost entirely upon the performance of Bob Cummings as the pilot, and he's kind of awful.  It wouldn't have made much difference if he hadn't been; if this had had a performance as good as, say, Jack Warden's in "The Mighty Casey," it might have helped, but it would only have helped so much.
The episode seems to have a good reputation among fans of the series, however.  Hey, what do I know?

*not a legally-binding declaration
duh
Just a brief little thing that caught my eye and seemed worth passing on to you fine folks.
This piece from Seacoastonline.com is a reminiscence by writer J. Dennis Robinson about briefly meeting Stephen King at Ogunquit Beach in 1980.  Robertson took a photo to commemorate the occasion; he ran across it recently, hence the article.  Here's the photo, which I assume he wouldn't mind my sharing: 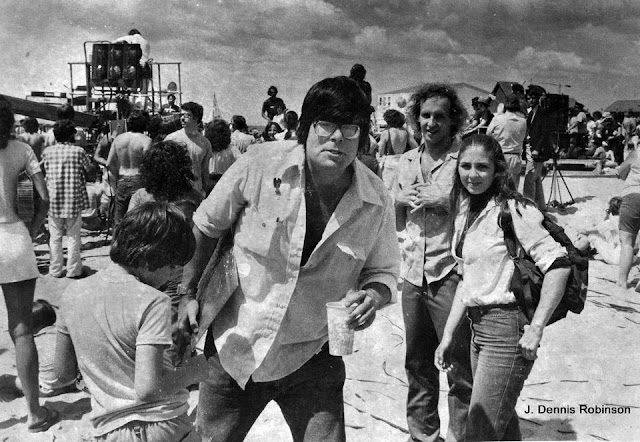 This line from Robinson's article jumped out at me:
"I couldn’t remember why he was there, so I looked it up online. I’d forgotten that parts of his novel The Stand take place in Ogunquit, and King was on hand during the filming of the movie version."
Wait now.  WHAT?!?
There's no movie version of The Stand from 1980...!  Sure, the George Romero version was supposed to film around that time, but it never happened.
Right?  Unless...
Clearly, J. Dennis Robinson comes from a level of the Tower where Romero's The Stand DID happen!  This guy has photographic evidence!  I mean, shit-fire, man, that's clearly the actress who played Frannie and the actor who played Jess (Frannie's worthless baby-daddy) standing behind Steve.  Right?  There can be no other explanation.  Well, okay; it's probably the stand-ins for the real actors, but otherwise, this is incontrovertible evidence that not only do parallel dimensions exist, but a George Romero-directed The Stand happened in some other version of the early 1980s.
Alternatively, Robinson has mixed up his memories a bit and King (along with son Joe Hill, who I assume the boy in the photo to be) was visiting the set of some non-King movie that happened to be filming at Ogunquit Beach.
That seems unlikely to me, though; I'm pretty sure this is a photo from a parallel dimension.
by Bryant Burnette at 4:07 AM 20 comments: