A Review of "Hard Listening"

Tonight, for your reading pleasure: a review of Hard Listening, a recent e-book anthology from members of The Rock Bottom Remainders.  Stephen King, of course, was one of the charter longtime members of that outfit, and so it seemed mandatory that this blog devote some time to the book.

Which, quite frankly, I have a difficult time thinking of as a book.  I have no fundamental objection to reading digitally: I own an iPad, and I have the Kindle app for my laptop.  On occasions when an author I follow releases an e-book exclusive, I am more than happy to use one of those devices.  But the fact is that I prefer a book in my hands, not a hunk of plastic and metal; and the fact is also that I prefer to have something I can put on my shelf alongside all my other books.  Because, like...I enjoy arranging them and whatnot.

So sue me; those are my preferences.

It's an irrelevant distinction for many (if not most) people, and as time continues to fly by, it will only become more irrelevant.  I only mention it because I felt like mentioning it.  Sometimes I do that.

For example, here is a list of all fourteen of Pixar's movies, from worst to best (in the opinion of this blogger):

What's that got to do with Hard Listening?

Not a flippin' thing, y'all.  I just felt like mentioning it.

Here's another thing I feel like mentioning: whether you want to call it a book, an e-book, a PDF, a file, or a watermelon, Hard Listening is a lot of fun to read. 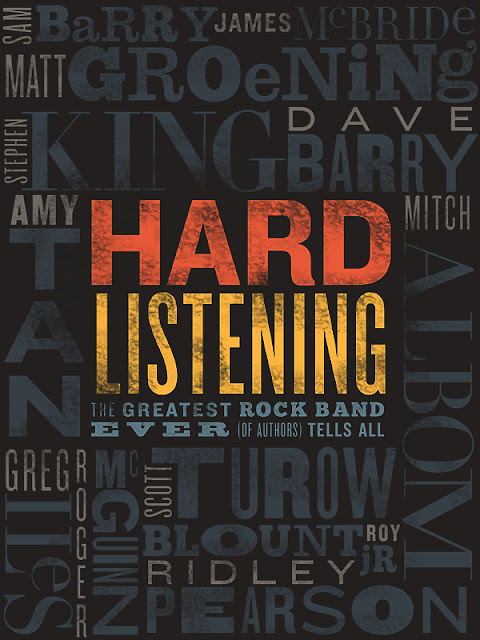 Follow me, and I'll give you a breakdown on its contents.

First off, a quick note about the format in which I read the (sigh) book: I got the iBooks version, because the anthology was supposedly designed with that format in mind.  I also got the Kindle version, so that I could have a version on my laptop.  I am contemplating printing it out and having it bound so I can put a copy on my bookshelf.  (Yes, I am lame; let's all agree to not worry much about that.)

I can tell you now that if you are going to get the book, and have the option of getting the iBooks version, you should do so.  It is, aesthetically, so superior to the Kindle version that whoever is responsible for designing the Kindle version really ought to be ashamed of themselves.  I'll try to give you some specific examples of that as we go along.

[UPDATE, 7/2/13:  It has been pointed out to me that there is an enhanced version for Kindle.  I opted for the standard Kindle edition, so I can't vouch for the enhanced edition.  It is probably a logical assumption, though, to assume that the enhanced version is superior to the standard one.  I certainly felt it was worth mentioning.]
The book begins with a fax sent from Ridley Parson to Kathi Goldmark in 1992, and then transitions into several emails from nearly two decades later.  Correspondences of this nature are peppered throughout the text, and offer a nice peek behind the curtains.

The first essay is by Sam Barry.  It's called "Rock Stars...For Librarians," and it tells (among other things) the story of how Sam and Kathi Goldmark became an item.  Goldmark, in case you didn't know, is the lady who had the idea to form the band.  She died an untimely death in 2012, and the proceeds from Hard Listening are going toward defraying the medical bills she accumulated during her final years.  Sorry if I just bummed everyone out.  This essay won't do that, though; turns out that Sam Barry is just as funny a writer as his brother, Dave, is.

The iBooks version of Hard Listening has already distinguished itself compared to the Kindle version by the first essay, but the way.  There is a minute-long video of physically-challenged Remainders Stephen King and Greg Iles being ferried to an RBR event by being pushed on a flatbed cart.  Kindle ain't got no videos!  It's nonessential stuff, perhaps, but given the choice between having it and not having it, who'd opt for not having it?  The price difference is about $7, and based on the little extras like this and the wide gap in attractiveness-of-design, the iBooks version is the clear champion.

Let's do a comparison.  The iBooks version contains a feature allowing you to zip from one "chapter" of the book to the next; each chapter heading shows tiles of the individual pages beneath it, so you can go from the main page of each chapter directly to one of its individual pages.  For the Sam Barry essay, that looks like this: 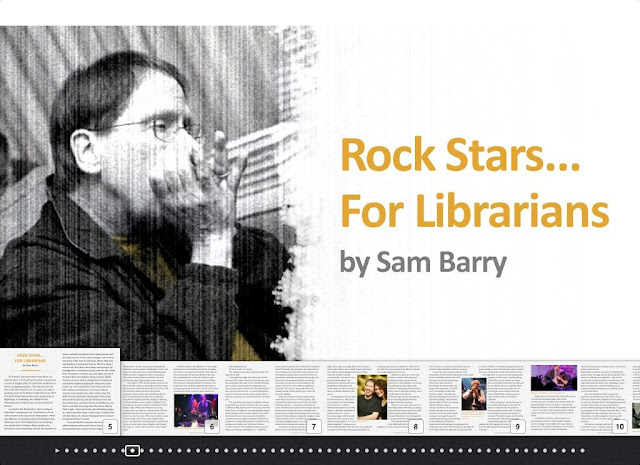 Here's the first page of the essay from the Kindle version: 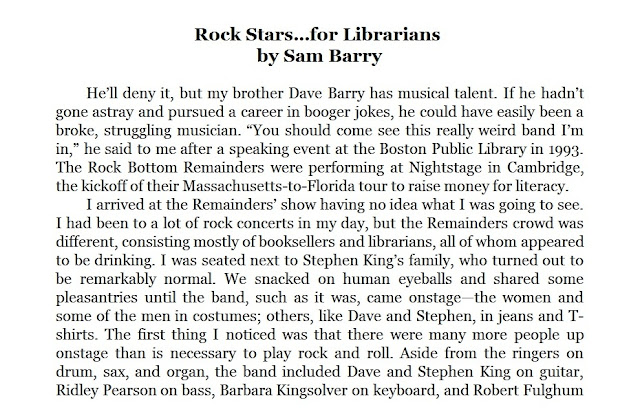 Perfectly readable, sure; but compared to the iBooks version, it looks slapped-together.  At best, it looks slapped together; there are plenty of places where it looks worse.  Example: the following fax from Pearson to Goldmark:


There is, from a formatting and design standpoint, no excuse for not figuring out a way to squeeze that last line -- the friggin' signature! -- onto the previous page.  Giving an entire page to that signoff is just sloppy and awful, and whoever did it ought to be spoken to.  That sort of thing happens repeatedly in the Kindle version, frequently with photo credits, which ought to appear right beneath the photo itself, but more often than not get shunted off onto the next page, where they sit all by their lonesome, looking pathetic and dejected.

Ridley Pearson -- possibly best-known to King fans as the ghost-author (no pun intended) of The Diary of Ellen Rimbauer -- contributes an essay called "The Green Room," wherein he offers up descriptions of his fellow bandmates.  Here's an excerpt from his paragraph on Dave Barry:

The other person always seems to come first for Dave -- I'm not sure there's a better compliment to be paid for a human being.  He claims to be agnostic, and yet I don't really believe it.  The son of a preacher, Dave has an indomitable spirit.  He can frustrate the hell out of you, because he knows everything.  I mean it: He knows everything.  He doesn't claim to know everything; he just does.

Good stuff.  Apart from Ellen Rimbauer, I've never read anything by Pearson.  One of the byproducts of reading Hard Listening is that I now have a desire to go out and read every single thing every written by at least a few of the authors present here.  That's unlikely to happen, but I betcha I end up reading something by all of them before too much longer.

James McBride contributes an essay called "A Truly Horrible Band," wherein he talks, amongst other topics, about how incredibly shitty the band was.

This is one of the, uh, longer essays in the book, and it's also one of the best.

Scott Turow contributes "Singing in the Key of H," which is the story of how he joined the band, despite not being able to play an instrument of any kind, including his own voice.  He did his level best to make up for that by wearing an increasingly odd variety of wigs.  His spleen also became on ongoing source of humor and contention.

"What I Learned in the Remainders," by Dave Barry: why have I not read more Dave Barry, exactly...?  Seems like a horrible mistake.

"My Elvis Takes It Off" by Mitch Albom tells the story of the author dressed as Elvis doing a striptease at one performance.  This chapter also includes a video of Albom wearing a preposterously magnificent Elvis-imitator wig, and the sight of that damned thing apparently tickled Stephen King so greatly that he literally fell into the floor and had to crawl around for a bit to work it out of his system.  You will see that happen if you own an iPad.  Kindle owners, you're shit outta luck.

"This Is Not About Me" by Roy Blount Jr. includes a thoroughly amusing autobiography that I suspect may be an invention, and not merely because Blount eventually verifies it as such.  Funny stuff either way.

Matt Groening contributes an essay titled "I Was the Man in the Marge Simpson Mask" that is about exactly what it sounds like it would be about.  Hey, I didn't know Groening could write!  I thought he was strictly an artist!  Shows what I know...

Roger McGuinn, of The Byrds fame, apparently can write, too, and he contributes a fine essay wherei he details how he came to join the band.  It's called "Hitting Rock Bottom."  Also, he apparently at soe point lost a karaoke game because he was unable to sound as much like himself as the computer thought he ought to sound.  Ouch...

" 'More Cowbell!' " by Greg Iles finds him tossing off a few stories about some of his fellow Remainders; his is one of the many essays in this book not written by Stephen King that prominently feature King in the guise of anecdotes from bandmates.  So for you Kingphiles who think there might not be enough actual content by King to justify your purchase, know that he is discussed frequently by his fellow authors.  Especially Iles, who, like King, was involved in a terrible car accident; this was years after King's, and Iles actually lost a leg.  That leg has been replaced by a fine-looking metal one, though, and he looks like a bit of a badass with it.

King contributes an essay called "Just a Little Talent," and for those of you who have read his essays before know, he's just as good a storyteller in nonfictional form as he is in fictional form.  This is the tale of a King we never knew existed: one who, during all the years in which he made the journey from aspiring writer to household name to living legend, carried a guitar with him the whole way.  It was a guitar he could never play as well as he wished, but the moral of the story is this: don't let not having talent dissuade you, because sometimes having merely a little talent is sufficient.  It's a great essay; if not the best in the collection, certaily close to the top of the pile.

After that comes a lengthy series of emails from various members to each other and to the group.  Then, something called "The McGuinn Karaoke Challenge...For Authors," which consists of four short stories.  Each is written in emulation of the style of Stephen King; one of them is by King himself (the others are by Pearson, Dave Barry, and Iles), and the fun for readers lies in trying to guess which one is his.

The iBooks version gives you the ability to actually vote for your pick, but don't fear: after the fourth story, you will be told who wrote what.

I was immensely proud of myself to have picked correctly.  Not only that, I correctly identified who wrote each of the stories!  I won't spoil the fun of divulging which is which here; you'll have to buy the book for that.  There is also a fun piece by the Book Genome Project, which analyzed all four stories and makes analysis/predictions of who wrote what.  The results...may surprise you.  Or not.

And that is basically it.  Twelve essays, all good, several great; four short stories, one of which is by King himself; and a lot of tidbits like emails, faxes, and whatnot.  I was greatly entertained by it all, and if a print edition is ever published, I'll happily buy a copy.
by Bryant Burnette at 11:41 PM