According to Wikipedia -- and also to everything else I've ever seen or heard in my entire life -- the acronym "FAQ" stands for "frequently asked questions."

With that in mind, when you see the title Stephen King Films FAQ, what sort of mental concept does it conjure for you in terms of what the content and structure of the book will be?  If you answered, "a book about the movies of Stephen King, arranged in the form of a series of ostensibly-frequently-asked questions about same," or some variant of that, then congratulations: you came to the same conclusion I reached.
It might or might not, then, surprise you that this particular book is not in any way structured around a series of questions -- frequently asked or otherwise -- about the movies of Stephen King.  Whether or not it surprises you, odds are good that you won't much care.  You'll care even less when and if you discover that Stephen King Films FAQ is part of a series of books with FAQ in the title, each based on specific subjects and published by Applause.  The series editor is filmmaker Robert Rodriguez, so I suppose I ought to be blaming him.  This is fine; it gives me something to blame him for, whereas before I only had him encouraging Frank Miller to direct (which led to Miller's film The Spirit, surely one of the all-time cinematic losers).

[UPDATE:  A commenter informs me that this is not THE Robert Rodriguez, but a different person altogether.  We regret the error, but are too tied to slamming The Spirit to fully remove the above comments.]

The idea, I guess, is that these books serve a similar function to what a website's FAQ section serves: to introduce, to explain, to clarify, and to forestall.  None of this lessens the truth of the meaning behind the acronym itself; you cannot label something an FAQ and decide to simply ignore what the "F," the "A," and the "Q" mean.

Granted, we live in a culture that has within my lifetime decided that the word "literally" does not literally have to mean "literally" anymore.

With this in mind, I am considering adopting an if-you-can't-beat-'em-join-'em stance, and becoming a trailblazer in the saying-stupid-ass-shit field.  I haven't settled on a final approach yet, but my first idea is to begin referring to every movie and television show as a Harry Potter.  I myself saw a good new Harry Potter a few weeks ago; it was one of the best ones ever that had the Muppets in it.  I especially liked the songs, all of which reminded me of the ones from that Harry Potter HBO did a few years back, the one where Harry Potter was played by Jemaine Clement from the Outback Steakhouse commercials.  I think this is because the other guy who played Harry Potter on that series wrote the songs for this new Harry Potter.

If we, as a people, can make "literally" mean "figuratively," then we can sure as fuck make all movies be Harry Potters.

If a book that is titled an FAQ but is not actually an FAQ doesn't bother you the same way it bothers me, then you are probably in better shape long-term than I am.  And title issues notwithstanding, Scott Von Doviak's book is pretty good.  It isn't going to redefine the way you think of Stephen King movies as a whole, although it might help to reshape the way you think about a few of them individually.  It also won't redefine the way you think of film criticism.  But it will likely entertain and educate you, and that's a pretty good thing to say about a book. 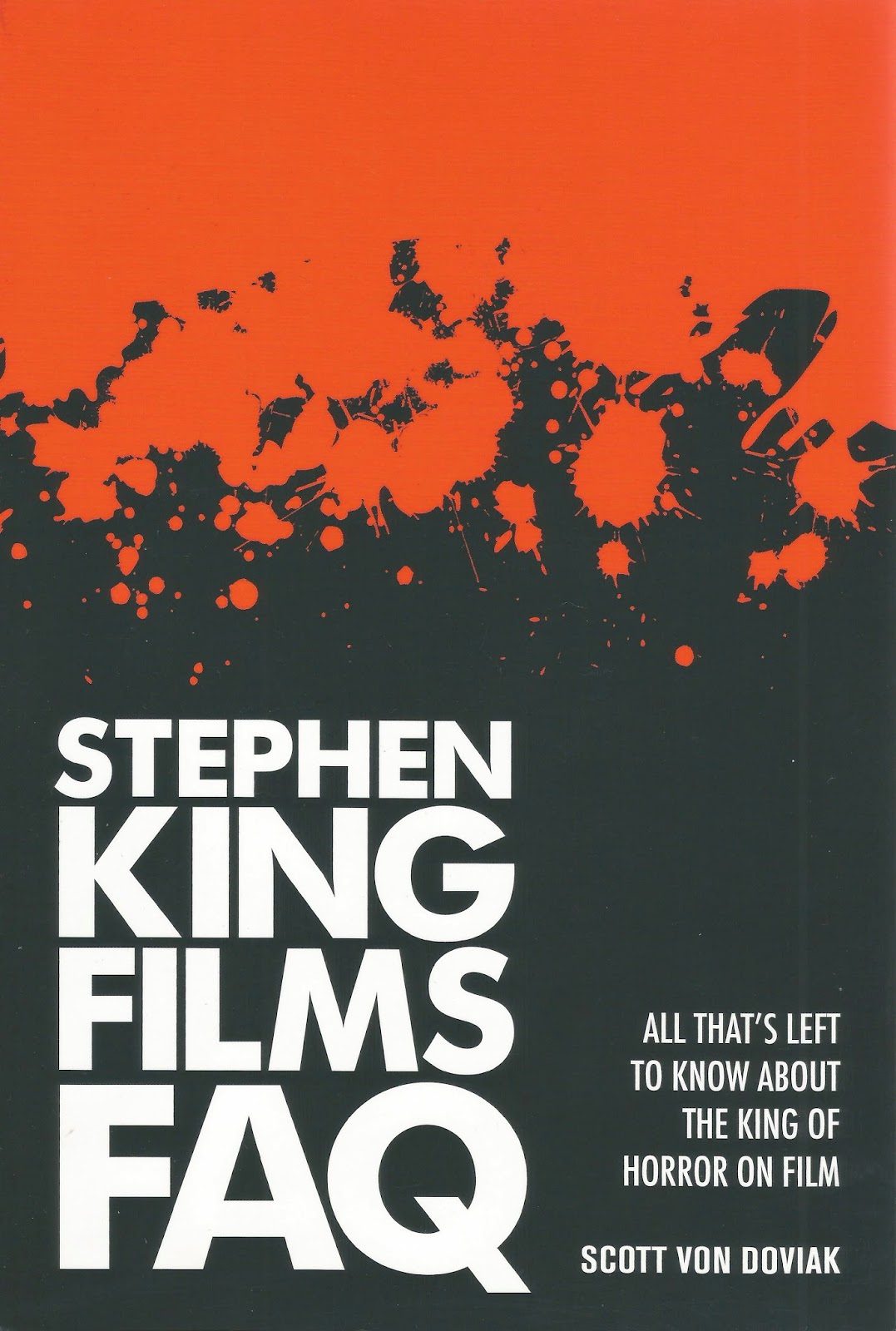 The book opens with 38 pages worth of chapters discussing the history of the horror genre on film leading up to 1976 (the year the first King-based film, Carrie, opened).  This is similar to the manner in which a great many biographies of people begin: with the backstory of their parents, their grandparents, their great-parents, their uncles and aunts and the towns in which these various people lived.  I'm by no means a rabid reader of biographies (though I'd like to be), but I've read enough of them to know that most of the good ones begin in this fashion.

A book of film criticism is not a biography, but it shares a belief with that literary genre: that subjects do not exist in a void, and that understanding their context is essential.  Not only do I not have a problem with Von Doviak's book beginning in this fashion, I think it was in some ways essential that it do so.

My problem is that I don't necessarily feel as if Von Doviak achieved the goal.  He begins by talking about A Trip to the Moon (1902) and concludes by talking about the rise of Tobe Hooper and John Carpenter.  In the seventy-plus years lying between those two points, there are a great many cinematic touchstones, and Von Doviak discusses more than a few of them.  But to what effect?  He doesn't go in-depth into anything, which means that he does not do much in the way of illustrating why these films are important to an understanding of the films of Stephen King (if indeed they are).

Was King only influenced by horror films?  What about non-horror movies and television?  What of the stacks upon stacks of novels and short stories and comic books that he read?  What of the pop music of King's childhood?  If you know anything about King's work then you know that those elements -- and plenty others besides, many of which would be outside of our ability to know and understand (familial connections, etc.) -- were at least as influential upon him as were horror films.  So while these opening chapters are entertaining, they don't ultimately have much of anything to say on the subject at hand, and are too shallow to be genuinely worthwhile in and of themselves.

From here, the book begins to delve into the actual movies themselves.  A representative chapter discusses a bit of the history behind the writing of the book or story, then spends some time on the behind the scenes of the film's production, and includes comments from Von Doviak in terms of his assessment of the film's (and, in some cases, the book's) quality.  Some chapters have "Bloodlines," i.e. (as one example) further explorations into the works of the director.  Von Doviak has found lots of quotations from magazines and newspaper articles to flesh out and illuminate certain aspects of each chapter, and there is a lot of good stuff to be found there.

Peppered throughout, you will also find plenty of examples of Von Doviak's opinions about these movies.  It is likely to be this material that makes or breaks the book for most readers.  Ultimately, I have to say that for me, it broke the book.  Not that I disagreed with Von Doviak all that much; I did on a few occasions, but overall, we agreed more than we disagreed.  No, my problem is that Von Doviak simply doesn't have all that much to say.  There is a difference between a film critic and a film reviewer, and while the line between the two is not a rigidly defined one, I think you could certainly place any critic (or "critic") on a spectrum closer to one pole or the other.  Von Doviak is closer to being a film reviewer; he does not dig very deeply at all, and for a book about the films of Stephen King that pushes close to being 400 pages, I would have expected a bit more depth from the actual criticism.  Either that, or for it to have been less opinionated; as is, I don't think it's occupying a particularly comfortable place, and feels like either a compromise or an overreach, depending on what you want from the book.

But I myself am perhaps being overly opinionated.  I think most people who would wish to read this book -- fans of Stephen King films -- will not care about some of that sort of stuff that I care about.  They are much more likely to read their way through the book and enjoy the ride.

I myself enjoyed reading it, and since much of my disappointment is due to wishing Von Doviak had dug a little deeper, I suppose that what I am really saying is that I had fun with it and wish there had been more.

So, do I recommend it?  If you've read my review and thought that it sounds like my head is up my ass, then I'd say this is a book you will absolutely enjoy.  If some of what I've expressed concerns about is the sort of thing that would concern you, then you are apt to feel -- as I do -- a bit more conflicted about it.

Either way, I hope I've given you a useful opinion.
by Bryant Burnette at 4:41 PM