I work most Saturday nights, so I was not home to see Lifetime's movie version of Big Driver this past weekend.  But that's why God made DVRs, babe; that's why God made DVRs.
So when I got home, I plopped down in front of the teevee and gave it a look, and then decided to turn things into a double feature and check out Mercy, as well.
This was far from being the best double feature I've ever experienced.  We may as well get that established right up front.  But despite that, we may as well discuss the movies, because that's what we do around here. 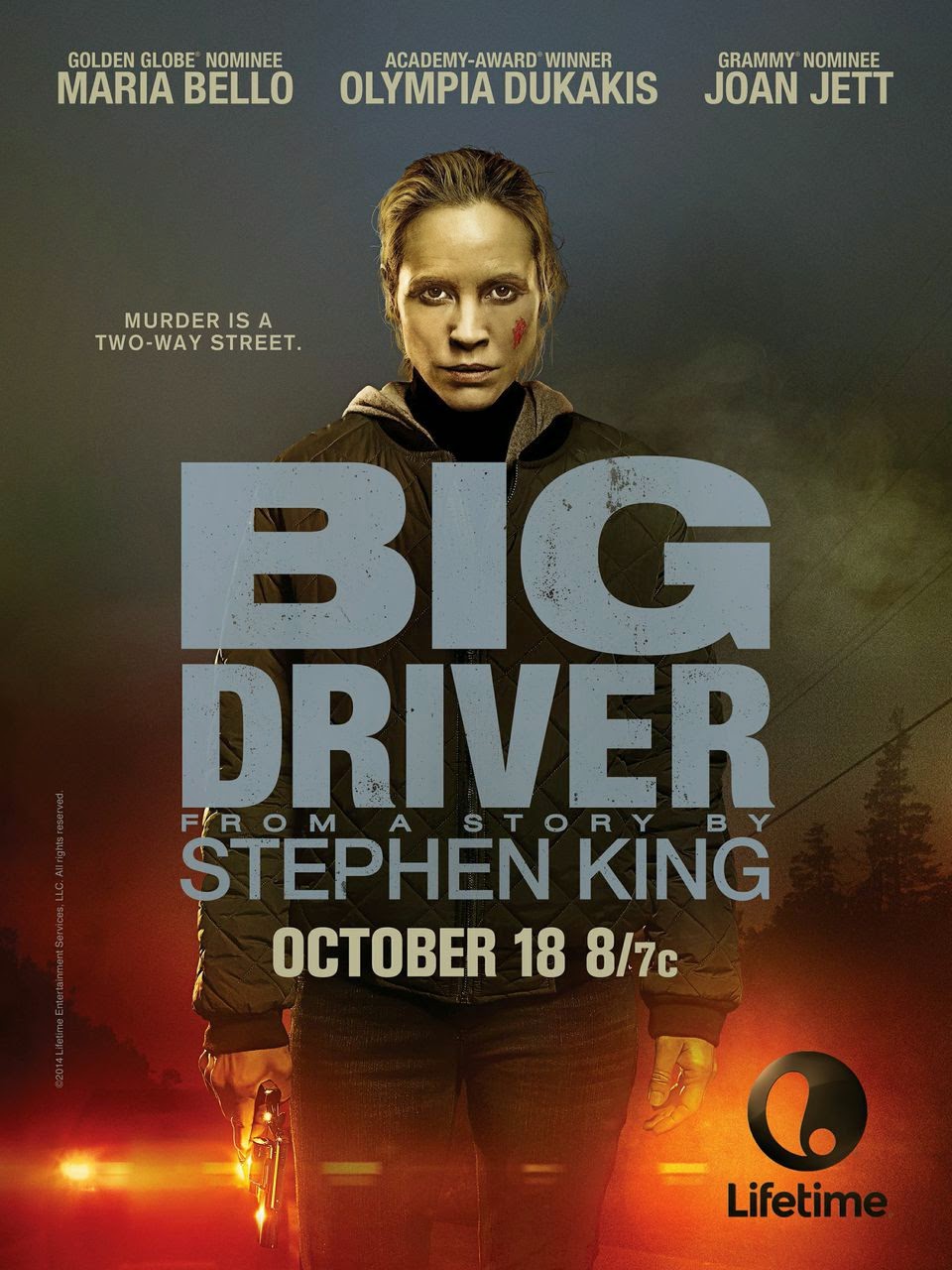 Big Driver began at something of a disadvantage.  I'm not a huge fan of the novella (which appeared in Full Dark, No Stars) to begin with; it's got a sort of not-quite-finished feel to it, and what I mean by that is that the prose struck me as being a bit less distinguished than is typically the case with King.  If it were a baked potato, it'd be that sort of slightly-harder-than-desired texture that tells you to put that sucker back in for another half hour.
This is not to say that it's a bad novella.  It isn't, and in order to discuss that more fully, we're about to go into spoiler territory.
Read more »
by Bryant Burnette at 3:18 AM 18 comments:

As I mentioned during part 1, putting this retrospective on Needful Things together has proven to be more of a challenge than is typically the case for me.  So rather than belabor the issue, I'm going to conclude my look at the novel by vomiting a bunch of notes onto a blog post.
That sounds dismissive, but don't take it that way unless you take it as me being dismissive about my own talents as a blogger.  I'm definitely not dismissive of the novel, which I found to be quite a bit better than I remembered.  I think there's lots to discuss, so let's just get to discussing it.
A word about format seems in order.  Since I'm doing what amounts to a commentary track here, it makes sense to have a standardized method of referral.  Ideally, we'd all just use the same edition of the novel, but that, of course, would be a hopelessly naive expectation.  So instead, I am going to refer not to page numbers, but to chapters and subchapters.  For example, if I refer to something in subchapter two of Chapter One, I will designate it like this:  Ch.1 (2).
Simple enough?  Good, let's proceed.

Email ThisBlogThis!Share to TwitterShare to FacebookShare to Pinterest
Labels: Bag of Bones, Christine, Cujo, Dracula, Elvis Presley, Fair Extension, H.P. Lovecraft, It, Needful Things, Storm of the Century, The Body, The Dark Half, The Eyes of the Dragon, The Library Policeman, The Sun Dog

It Might Be Just As Well If There Was a Witness: "Needful Things" Revisited, Part 1

It's about damn time.

I've been looking forward to revisiting Needful Things for quite a while.  The novel will always hold a special place in my heart due to the fact that it was one of the first King books to be published after I became a fan.  (The second, actually, after Four Past Midnight.)  I'd burned my way through his entire bibliography in just a few months, and those first few new publications which came next revved me up: I was no longer catching up on King's work, I was experiencing it as it happened.
I read it as soon as I could get a copy.  I remember the bulk of this reading being done in a biology lab in my high school, which was where I had homeroom; I'd spend as much time as I could prior to school beginning in there, reading away contentedly.
Despite that huge wave of excitement, Needful Things never became one of my favorite King novels.  I can't remember ever reading the book a second time.  I know that at some point a few years later I found a used copy of the box set that contained all three volumes of the audiobook (on cassette!), and bought it.  I know I listened to it, so if we count that, that makes two read-throughs.
But other than that, I never returned to it the way I did with stuff like The Waste Lands or 'salem's Lot or The Stand or It.
If this sounds familiar, it's almost certainly because I wrote a version of the exact same sentiment when I reread and reviewed Four Past Midnight.  (Like many hacks, I am prone to repetition.)  And I'm sure I said the same thing about it that I shall now say about Needful Things: because of the lack of revisits, my memory of the book had grown quite dim over the years, meaning that the revisit would be almost like reading a new King book for the first time.  Not quite; but close.  Close enough to be excited about, at any rate.
I came away from my revisit with Four Past Midnight somewhat underwhelmed by the experience.  I enjoyed reading the four stories contained therein, but none of them really enthused me.

I enjoyed revisiting Needful Things quite a bit more.  The last time I ranked all of King's books, I placed this one at #43, and this is what I had to say about it:

Lots of terrific characters here, and while it’s comedic in a dark way, it’s also frequently horrifying.  As with Under the Dome, the chills are mostly human-induced, too, rather than monster-induced.  That might make for an interesting critical essay one of these days.  Are there other King tales that also feature that element?  I bet there are.
Looking back on it, I'm not entirely sure I understand why King felt the need to "destroy" Castle Rock.  It wasn't hurting anybody, Steve!  Except maybe for itself...

If you're asking yourself how I could fairly rank the novel at all given my shoddy memory of the novel, well, you've asked a good question.  Answer: subjectivity and a willingness to run on instinct.
So, looking at those tellingly brief comments, how would I assess their accuracy in terms of the way they reflect my feelings upon finally rereading the book?

Before we get continue, I have a confession to make: much of the rest of this post is shit.  Shit, shit, shit; shitty-ass shit.

I don't know why, but writing these posts about Needful Things has proven to be ridiculously difficult for me to pull off.  I've been reworking the remainder of this particular one for what seems like weeks now, and it never gets less shitty.  I'm not sure if that's because I'm simply failing to connect with my own ideas or if it's because those ideas are fundamentally incorrect.  It might even be both.

But whatever the case, I'm tired of wrestling with myself, so what we're going to do is this: I'm going to just post what I've got on this first part.  Shitty though it may be, I'm ready to be done with it.

Then, for part 2, I'm going to round up all of my notes from the rest of the novel and post them in chronological order.  Sort of like a commentary track for the novel, if you will.  From there, I'll move on to the movie and maybe the audiobook, and after that, maybe this sorry mess will be behind me.

And just so we're clear, this is in no way the novel's fault: this is my fault, and my next task will be to figure out how to avoid repeating the mistakes I've made here.  Once I figure out why I made them, that might even be doable.

So, let's talk about perspective.

Email ThisBlogThis!Share to TwitterShare to FacebookShare to Pinterest
Labels: Castle Rock, Mary Poppins, Needful Things, The Body, The Dark Half

A Review of Marvel's "The Dark Tower: The Drawing of the Three -- The Prisoner" #3 (aka Bryant Has Issues #55)

Marvel has really been pumping out the Dark Tower lately, haven't they?  This newest issue of The Drawing of the Three: The Prisoner marks the third to be released within the span of six weeks, which is excessive by comics-shipping standards.  Not that I'm complaining; not much, at least.  I'm pleased for there to be King-based comics in the marketplace.  So must Marvel be, hence the accelerated schedule. 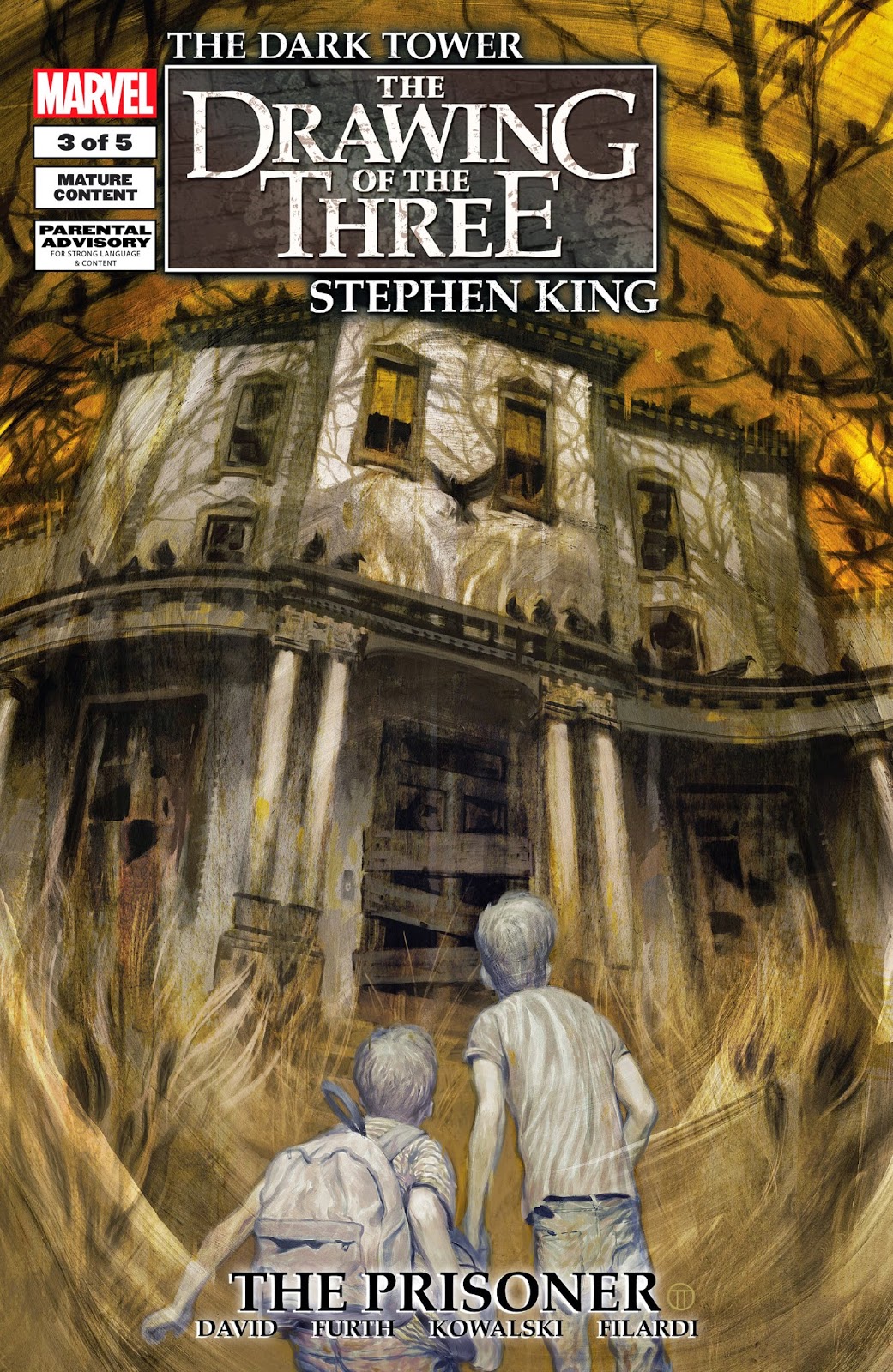 Unfortunately, my enthusiasm for The Drawing of the Three: The Prisoner is waning rapidly.  I was very impressed by issue #1, but found that #2 presented me with some questions which cast the whole endeavor in doubt to some degree.

Issue #3 does nothing to alleviate those concerns; and in fact, it deepens them.

When last we visited with the Dean brothers, they were reeling from a massive explosion.  It has been caused by a bomb they had unwittingly dropped off on behalf of Jack Andolini, and my read on the bomb was that it was designed so as to kill Eddie.  After all, it was clear that the mob had been hired by agents of the Crimson King to kill Eddie, so as to prevent him from fulfilling his role in Roland's ka-tet.  I was a bit confused as to why they would permit literally years to elapse between assassination attempts on the younger of the Dean brothers.  Does that make any sense?

Two of my friends once got into a mild dispute over some movie (don't remember what) that one of them had loved and the other had hated.  The former accused the latter of going into the screening with knives sharpened, expecting to dislike it and therefore tailoring an experience to fit his prejudices.
"Why would I ever want to not like a movie?" was the simple, irrefutable answer that came back.
I find myself in the somewhat unfortunate position of having (A) expected not to like the movie version of A Good Marriage and (B) having indeed not liked it.  Months ago, when the project was announced, I furrowed my brow a bit and said, "Well, Joan Allen is awesome casting, but I'm sort of worried about the director and I don't like Anthony Lapaglia as Bob at all."
That said, please understand that when I tell you that my two major problems with A Good Marriage are, indeed, Anthony Lapaglia and Peter Askin, this is not a case of me tailoring the experience to fit my expectations.  Why would I ever want to not like a Stephen King movie? 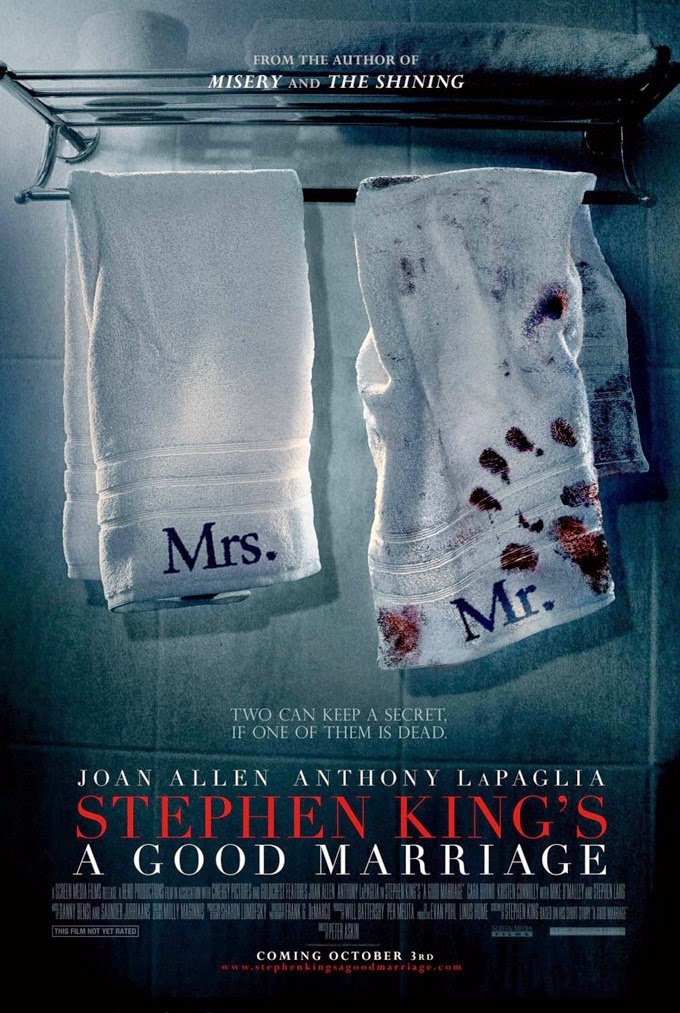 And yet, here we are.  There can be no doubt that indeed I did NOT like the movie.  In fact, I thought it was kind of terrible.  My feelings about it may have been influenced somewhat by another movie I saw earlier in the evening (more on that later), but I don't think that was the case to a large degree.  I'm not immune to influences of that sort, but I'm fairly self-aware as a(n amateur) critic; I take such things into consideration.

So when I tell you that in my opinion, A Good Marriage is a complete misfire, I speak with confidence.  I wish it weren't so, but I also wish that buffalo wings were healthy eating.  They aren't, because wishing doesn't make it so.