I Had a Lot to Be Careful For: A Review of "The Fifth Quarter"

Today, "The Fifth Quarter" is up to bat.
It's not much of a story, to be honest.  I sense already I'm going to struggle a bit for things to say, but that's okay, because I've got an ace up my sleeve.  Of sorts.
"The Fifth Quarter" was originally published (under the pseudonym John Swithen) in the April 1972 issue of Cavalier.  It also appeared in Cavalier's 1973 annual, and would later be reprinted in the February 1986 issue of The Twilight Zone Magazine before being collected in 1993's Nightmares & Dreamscapes.
Because it's the 1993 version of the story which most readers will encounter, that's the version we'll be considering.  However, I do have scans of the Cavalier and TZ versions of the story, and once I've said my piece about the story itself, I'm going to do something that I hope to do for a number of other King stories eventually: have a look at variations in the text from one version to the next.
If that sounds dry as mummy-humping to you, well, that's how it goes sometimes.  And speaking of humping:
"The Fifth Quarter" is a tale about a guy whose friend is killed when a heist he's part of goes wrong.  Partly as an act of revenge for his murdered pal, and partly -- mostly -- in an attempt to score the proceeds for himself, the unnamed protagonist goes on a small quest to track down the other three members of the four-man crew.

It doesn't go entirely to plan, of course.  He tracks down two of the crooks and corners them while they're in the same place; but as it turns out, the fourth and final member of the crew has also been tailing them.  So now he's tailing the narrator as well, having essentially allowed him to do most of the dirty work beforehand.

It isn't a bad story; or at least, I find it to be harmless enough.  Your mileage may vary.  I would have a hard time believing it's any King fan's favorite, either.  It just doesn't amount to a whole heck of a lot in the end.

After a strong start, 2018 proved to be a disappointment to me in terms of the number of books I read.  Summer (and much of the spring and fall) was a complete wash.
However, I'm hoping for a strong finish, and either way I'm going to talk about it.
Let's see how I did, beginning with:
Dune Messiah by Frank Herbert 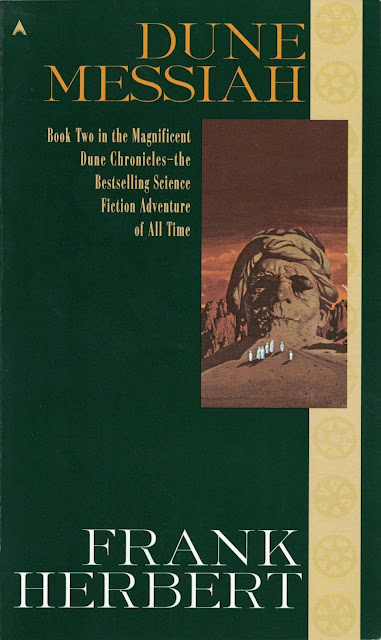 Pressed for an answer to the question "What is your absolute favorite novel?" I would likely answer "Dune by Frank Herbert."  I reread (and blogged about) that awesome work of science fiction last summer, and revisited the awesome (and underrated) sequel this summer. And my takeaway from a fresh visit with the sequel is that it might be better even than the original.

Disclaimer: This is (I think) the fifth version of this list that I've put together.  If you've read any of those, you've read much of this one; there's some rewriting here, but much of it is simply repurposed from previous editions.  (Which meant copying and pasting, which meant weird formatting glitches; Blogger gets pissed off if you copy and paste, and while I've eleminated as much of the formatting weirdness as I could, some of it lurks nevertheless.  So if you see places where there are too many lines between paragraphs ... well, I tried.)

The previous incarnations can be found by digging around, if you're interested enough to look for them.  I suppose doing so would give you some insight into how wrong I always manage to get these things the evolution of my thinking about some of the titles; that's a thing that sort of matters to me, which is why I've kept the older versions online.  If it matters 0% to you: trust me, I got no issue with that.
As always, I urge you not to take the list too seriously.  I generally go with my gut, and my gut fluctuates; it's influenced by recent rereads, or by podcast episodes discussing the works, or by conversations I have with correspondents and friends about these things, or by ... well, by the way the wind is blowing, maybe.
One thing I always struggle with is determining what to actually count as a "Stephen King book."  This is not as clear-cut an issue as it might seem.  Some items are clear.  There's no scenario in which The Shining wouldn't count.  With other titles, there's considerably more room for interpretation as to what the designation "book" actually means.  I've done version of these rankings where I tossed everything I could think of in; this version is more of a leaving-things-out take on the topic.
But I thought it might be useful to deal with some of the omitted titles up front, and establish some guidelines for why I decided (this time) to not formally rank them.  There's a whopping thirty of those; let's go through them in alphabetical order.