I have a love/hate relationship with audiobooks.  The first time I encountered one, however many years ago that was, I thought I'd stumbled upon some sort of magic.  And hey, maybe I had.

Over the years, however, my enthusiasm for the format has diminished considerably.  Too many shabby performances, man; I find myself entirely put off by narrators who take it as their duty to deliver character performances.  I guess some amount of that is necessary; and if you're actually good at it, well, why not go for it?  I find most readers to be decidedly not good at it.  Nothing kills an audiobook for me faster, and I've found myself liking some novels less after hearing them in audio form than I had liked them when simply reading them in prose.  Perhaps this speaks to some weakness in my character; beats me, man, I'm just here to try and make sense out of all this shit.

With that in mind, I've embarked upon what is almost certainly a foolhardy mission: to detail the history of King audiobooks, along with my thoughts on each title.  In some cases, I probably won't have listened to the entirety of the audiobook; as I've said, they sometimes gall me, and while I'm into the idea of having listened to them all, I'm not THAT into it.

Before we get going properly, let me acknowledge something: Kevin Quigley is the go-to guy for information about King audiobooks.  This page from his site Charnel House was very valuable to me in putting this overview together; and that's an understatement.

At Charnel House, you will find references to Library of Congress recordings for certain King books.  These were recorded expressly for the use of blind readers (no, that's not an oxymoron), and were apparently available ... somehow.  Via libraries, probably; possibly also via mail on a rental basis.  I've done very little research on this, and if you wish to accuse me of laziness, I will plead no contest.  I will also welcome any additional information you have, so use them comments, y'all.

Anyways, these were technically the first King audiobooks, and they are as follows:


Additionally, I happen to know of the following, which may or may not have anything to do with the Library of Congress:


I've managed to track down MP3s of a few of these; I've listened to none of them, and I'm not sure I ever will.  Quigley asserts that the readers are amateurs, not for-hire professionals; and I wonder whether I'd be able to endure such a thing.

I might, eventually; I mean, heck, if a series of posts like this won't get to listen to them, what would?  If nothing else, I'm kind of curious to find out what an audiobook version of a screenplay (like Storm of the Century) would be like.

But I won't be covering any of those in this particular post, and while I am 100% copacetic with that decision I thought it made sense to at least mention them, just so y'all didn't assume I was unaware of them.

We good with that?

Okey doke, then let's move into the post proper, beginning in a real damn fine place to begin:


There are two things I absolutely do not know about Frank Muller's Different Seasons:

(1)  Whether these were indeed released separately and (2) whether it/they was/were actually the first commercially-available King audiobook(s).

Quigley lists these as being 1985 releases, which would generally be good enough for me.  The recordings themselves say "copyright 1984," though, so between that and Skeleton Crew definitively NOT being released until '85, I think it's likely these four releases beat the Recorded Books Skeleton Crew into the world.  And if they didn't, we're going to pretend they did.

There's also a third contender: the truncated Stories From Night Shift release, more on which in a few paragraphs.  That, too, was a 1985 release; could it have actually preceded the Recorded Books Different Seasons volumes?  I do not know for a fact, but it seems possible.

What I do know for a fact is that these four audio releases of the Different Seasons novellas are awesome.  Frank Muller was hands down the finest narrator of audiobooks to ever live.  Have I heard every audiobook narrator to ever work in that business?  I have not.  But I'm standing by my assessment, and that's just all there is to it.  We'll hear Muller's name again in this post, fairly frequently (though not frequently enough for my tastes). 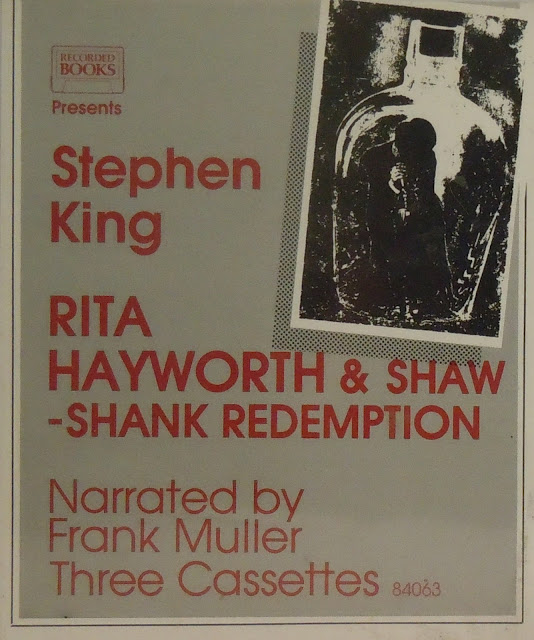