On the docket for today: the Stephen King storytelling universe expands by way of a Castle Rock book written not by King himself, but by a duly-licensed compatriot. 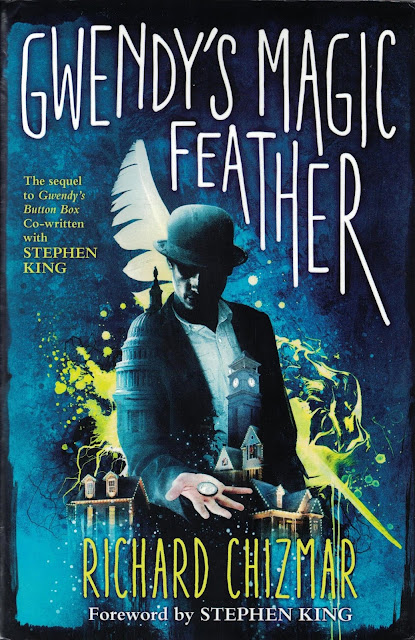 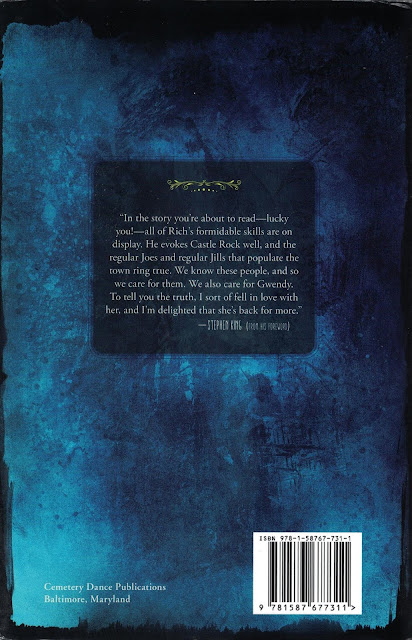 Way back in 2012, I fretted about the possibility of something like this.  Thus spake 2012 Bryant:

But what if it's just some Joe Blow type, some mook with good intentions but an insufficient talent level?  Would I be okay with it then?  Probably not.

It seemed like a thing that was bound to happen, and while Gwendy's Magic Feather isn't fully that, it's close enough that I kind of feel the winds beginning already to blow in the direction about which I was pre-grousing in 2012.  Hulu's Castle Rock series is a major step in that direction already (and not one which pleases me), but at least that's film.  Prose is something else entirely.

There are, arguably, two extant novels that already fit the bill somewhat: The Diary of Ellen Rimbauer and The Journals of Eleanor Druse.  Those companions books to (respectively) Rose Red and Kingdom Hospital were (ghost-)written by Riddley Pearson and Richard Dooling, but Pearson's book was marketed in a way that made people think it might have been penned by King.  It wasn't, but it sold well enough that clearly plenty of folks were either fooled or willing to take the plunge based merely on the association.  And both, frankly, are good books in their own right; so really, what's the problem?
As it relates to Gwendy's Magic Feather, I suppose I'd conclude that there mostly isn't one.  After all, I think a strong argument could be made that in its final form, Gwendy's Button Box is slightly more a Chizmar book than a King book.  I didn't feel that way in my initial review of it in 2017, but King's foreword to the sequel seems to hint in that direction.  Even if it isn't, Chizmar's involvement should not be minimized; many King fans (and I've been guilty of this in my time) see his name and then let their eyes go blurry to anyone else's involvement, but that's a disservice to his co-author.  That being the case, why shouldn't Chizmar write a second Gwendy Peterson story if he's inclined to do so (and if King approves)?  No reason for him not to, so I'm kind of having a not-quite-appropriate conversation here; it's a shoe worth keeping an eye on, but it doesn't really fit Gwendy's Magic Feather.
Mark my words, though: we may yet have to contend -- be it decades from now or mere years -- with sanctioned sequels to books that were entirely King's.  Will someone give us the story of what Charlie McGee has been up to all these years?  Will Pennywise return to haunt Derry yet again?  Will we find out what's transpired in the world of The Stand?  Will fucking Cujo have puppies with Christine or some bullshit like that?  Don't rule it out.  I'll say again what I said in 2012: in the right hands, maybe there's some merit to a few of those ideas.  I can't, and don't, rule it out.

But I worry.  I worry a lot.  And frankly, by being given the honor of working with Castle Rock as a setting in the Gwendy's books, Richard Chizmar is now somebody a King fan like me has to keep an eye on.  If an expansion of King's literary universe of the sort I hypothesized about in the above paragraph were to begin taking shape in the near future, Chizmar would surely be a prime candidate for joining that work crew.
To me, that makes it valid to view Gwendy's Magic Feather at least partially through a lens that I would not otherwise use: namely, I feel invited to look at the book not as a Richard Chizmar book, but as a would-be Stephen King book.

It occurs to me belatedly that I didn't touch much upon the titular feather.  The fact that I forgot it should tell you how important it is to the story.  Hint: not very.  It's a "magic" feather that we learn about Gwendy having bought from an older kid years ago in exchange for a sack of quarters.  Allegedly, she always believed thereafter that it was a magic feather, just because the kid said it was.  The idea, I think, is that Gwendy's belief stems from her purity, and that her goodness -- made important by way of her continued ability to spurn the less-savory uses of the button box -- in turn stems from that belief.  So the book, then, is ostensibly a celebration of Gwendy's belief (i.e., her faith), which is what powers her goodness.
My knee-jerk reaction is to be snarky about this, but I'll take some inspiration from Gwendy herself and tamp that down.  Thing is, though, I just don't think Chizmar does much with Gwendy's goodness.  She's kind of a saint.  Okay.  So what?  We need more saints in the real world, so I guess if maybe Gwendy inspires somebody to not be a dick (if only during a single paragraph) in a blog post, then she could theoretically inspire something more.  Couldn't a more compelling story have accompanied it, though?  Is what I'm saying.
Maybe I'm just missing something.  If so, you are cordially invited to point it out to me in the comments.
by Bryant Burnette at 9:15 PM